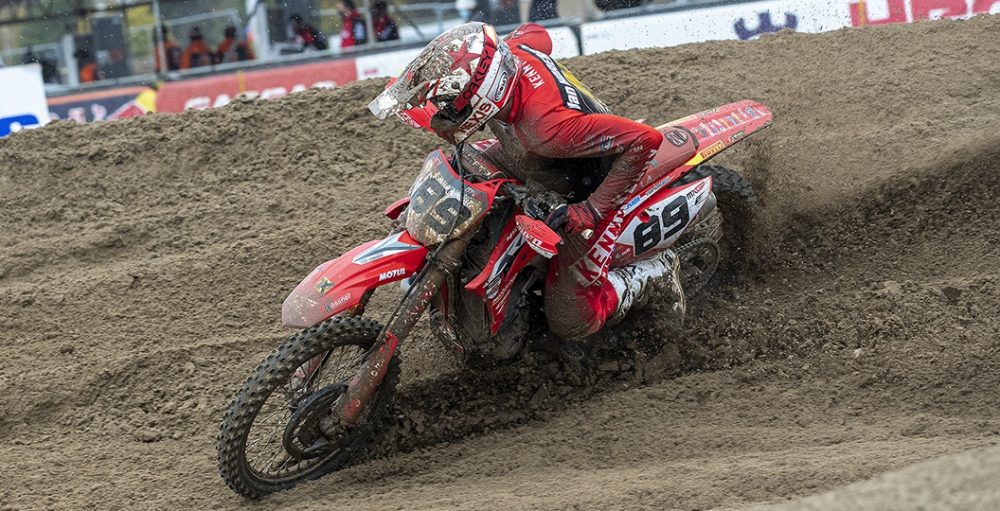 Jeremy Van Horebeek is now a Beta Factory Racing rider, much to the shock of people across the globe. The Italian manufacturer will enter the FIM Motocross World Championship for the first time, despite not even selling motocross bikes at the moment, and have picked up the two-time Grand Prix winner to spearhead their effort. There are obviously more questions than answers currently, but Van Horebeek does a good job of shedding light on the project and what the bike does well in this MX Vice interview.

MX Vice: You are a Beta factory rider – that is just crazy to say! You would not have believed that a few years ago. Talk us through how the deal came together and when they first approached you.

Jeremy Van Horebeek: They actually came to me not too long ago and I told them what my budget is straight away. With the way it is today, it is getting ridiculous with how things are going with riders riding for free and all of that. I am not doing that – I immediately told them what I wanted. They said, “Come over! You should test the bike and then I think we can make a deal.” I went over there a month and a half ago to test the bike. The main thing that I told myself was that I would jump into this project if the bike was safe. It is a completely new bike, and it’s not easy to make a new bike. The base of the bike is really good though, to be honest, and I think that there are some great things ahead. They called me and from then on we came to a deal. I’m really happy to be in this position.

You mentioned there that you cannot ride for free and I think that is especially important in this situation. You are going to be a racer, a development rider and everything else that comes with that.

I think that is why they believed in me and wanted to give me a correct contract. I have to develop the bike, but it is really not that bad. The chassis is honestly better than my Honda – the handling of the bike is even better than my old Honda. I never rode the new one, but it is better than the old one. There is a lot of work to do on the Beta engine, but we will get there step by step. They come from enduro and you need less power than standard there, because of the difficult conditions. That is why they do not have the experience and the material to make the bike go faster. They are working on it – it is looking good. I’m really happy to work on this project and help them develop the bike, because it is great for the future and next generation.

Did you have other options in the paddock for this season? Was it a case of do the deal with Beta or retire?

I was not even looking at the rides, because my two kids were my main priority and still are. I had a few different guys who contacted me, but they were just normal offers and nothing special. I just stayed on my sofa, stayed calm and enjoyed life. The plan was to not race anymore, actually, and just enjoy the family. I love racing though. It’s something that I love to do. It is not just the money that I’m interested in, because I do love racing. I was excited when the deal came and I rode on the bike for the first time.

I was quite surprised to see that you signed a two-year deal. I guess that speaks volumes about the fact that you still have the fire to be in MXGP and that you believe this bike can be quite good.

You know, it is a two-year deal. There is something in there that we can go our separate ways without any issues if things do not work out, but that’s not the plan. The plan is to do two years and help them get great results. I know the level is really high, but I think that I am still capable of doing great things. The birth of my two sons is motivating me even more now too. I think that it is perfect timing to do this, so I’m really excited to go on for two more years. I am only thirty-one, which seems old in MXGP. That’s still young in real life though! I think that I will manage two more years of being a professional athlete, especially with the motivation that I have now with the family.

What were your first thoughts after riding the Beta bike? The handling was really good, like you said, but was the whole package better than you were expecting?

Yeah, that is the thing! I said to myself that even if they give me a great offer, I had to see if the bike was safe and good. When I went on the bike, even without my suspension and everything, I felt that the bike was much calmer than a normal MXGP bike. That is for sure. It is like a bicycle! It is really small, not heavy and not pushing you to go into the corner. You can just go wherever you want. That was a good feeling straight away, which made it easy to make the choice. The people are… It makes me feel like I am back in Italy with the Rinaldi squad! It is the same mentality. It feels so good. Everyone is Italian, really friendly and kind of has the same mentality as the Rinaldi squad. That made it easier.

I think that a good thing about this is that you are obviously the number one rider on this team, and they do not have much experience. If you want something done to the bike, they will listen to you. It is almost like having a team that is built around you with the budget to make big changes.

Yeah. They are putting a lot of effort into Jimmy [Clochet] too, but he is still young and does not have the same experience. I actually think that he can do great if we work together – I do not mind helping him. They built the team around me a little bit, like you said, but I know that they contacted some other riders before me. Those were not the type of riders that I am though… I was still around the top five last year and finished ninth in the championship. Doing that is really difficult in MXGP. I think that they are going to listen to me and they have the experience from enduro, so maybe if I tell them something then they already know that stuff from enduro.

If someone tells them to make the bike slower, then they know how to do it from enduro. I think that is an advantage. The factory is in Italy too, so you do not have to call Japan and get parts shipped like in other factory teams. We would have to wait a few weeks before something would arrive at Rinaldi. I think that we can move quickly here. If we have to change something then they can do it straight away in their own factory, which is really big. People do not see it as a factory team – you cannot buy the bikes though. They are straight from the factory, which means it is a factory team. People do not believe it, because it is Beta. We will see if we can prove them wrong.

Yeah, an advantage is that I still have the full support of KYB suspension from the factory. I will run the same suspension as last year and that is a big advantage. Some other partners will support me – I brought them to the team. That is also a big advantage. Engine-wise we need more power, especially for the start. That is the main thing and the most difficult part for us at the moment. We have a really good bike for riding, but we are a little bit short on the start. We still have three months and a lot of testing ahead though. They do not use electronics like everyone else – they just do not have it. It is really difficult to get started at the moment, because they cannot do that. I hope that we can start working with that as well. It is much easier to work on the starts and to improve on the bike with that. These are the things that will take time with the Beta and that we need to improve. We are going in a good way though.

I guess this is going to be a bit of a mental adjustment for you. Whereas before you would go into the first round and shoot for a top five, with this deal it will take you a little longer to get the results that you are capable of. It is a case of develop the bike now, then hopefully the results will come.

I have no expectations. I am doing this to help them and for myself too, because I am pretty sure that we can have some good results. I think that it will take some time, like you said, but we are doing the three rounds in Italy before the MXGP season and a lot of factory teams are going to be there. We will learn some things there. Not everything, but at least we will know something. We will have the first round in Oman – if it goes ahead with COVID and all that – and then we will know where we are. I am pretty sure that if we had to go to Oman today, it would not mean that we would not be in the top twenty. It will take some time and more than half of the season to have top-seven results, but I think that has to be the goal still. I was in the top five or top seven many times with a stock Honda, so I think that it is clear that if we put a lot of work into this factory team then it is possible to do the same or maybe better. I don’t know.