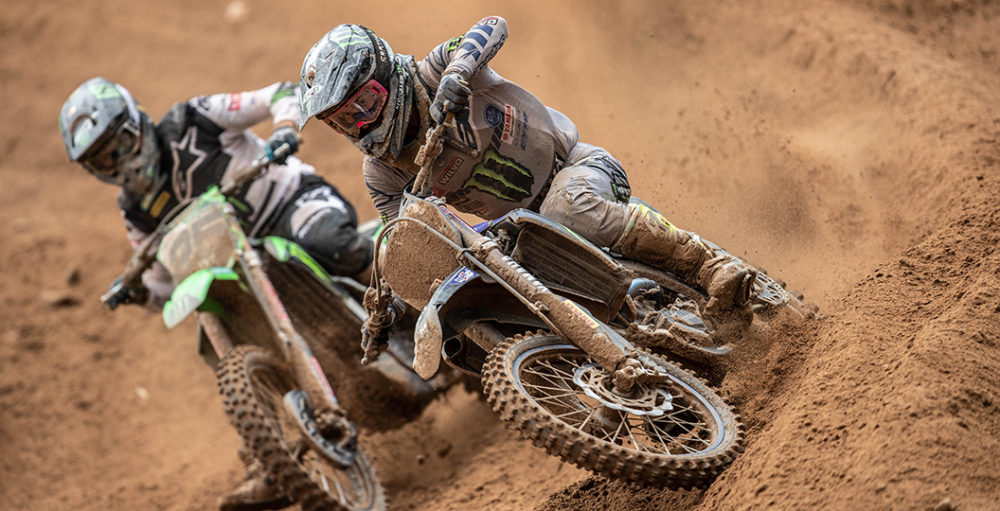 Jeremy Seewer is going from strength to strength with each race that passes, it seems. Seewer made another statement at the second Latvian fixture, the Grand Prix of Riga, and came extremely close to a maiden victory. It is quite clear that those celebrations are not too far away, but what has made the difference? Seewer discusses such a rapid rise to the top in this MX Vice interview from Wednesday evening, as well as such a strong showing in the waves section. This interview was initially posted as an MX Vice post-race podcast, presented by FLY Racing.

MX Vice: We spoke on Sunday and that was obviously an amazing race. This was another level. I think this was the best race of your career, with the first moto especially. Do you agree?

Jeremy Seewer: I think both. It’s just completely different. The track has changed quite a bit, too. Temperature cooled down and they put more water down. The track developed differently today, but I had four great motos on a high level. First moto I recovered so good after a bad start with following Jeffrey [Herlings], passing him and  battling with him. It was fun, for sure, and then in the second moto I was there from the beginning and could follow. I made it to second overall and came really close to an overall win finishing behind AJ.

If I would get him, it would have been it. Overall, yeah, a strong performance again. I feel really good. We have done great work. My bike is working well. My physical condition is super good. I recovered well also from Sunday to today. It’s just all falling in place. We also have a few things to improve, which is positive, so we can even get a bit better. Overall, I think we are in a good spot.

I think a win is coming, because truthfully Herlings was holding you up in that first moto. Had you got around him, I think you would have gone to the front. It’s coming real soon.

I agree. I had more pace than Jeffrey clearly, but Jeffrey is a several times world champion so you don’t pass him like easy. I passed him once, but unluckily was landing on a soft spot so he got me back. If I would have got him then, for sure, maybe I could have moved on? Maybe he would copy my lines. He would come back. You don’t know, but I am getting closer. I’m consistent. Now I’m consistent in the front, with the top guys. I’ve not finished far off from the winner each moto and that is what counts. Now I have a few days off, relax, enjoy some cycling and be ready for Sunday.

If you get bored in Riga and you need something to do, I recommend reading your sector-two times. You were taking a second out of the top three in sector two alone in moto two. They added that single in the middle, which I thought would hurt you because it made everyone do the same triple. It was phenomenal though.

Honestly, I just thought the same. Once I saw that brake jump in the middle I said, “They took away my advantage!” That was my strong point on Sunday. This morning I was not really feeling well there. Everybody was the same. I was not purple or whatever. During second moto, for some reason, I just started to bring so much more flow into that jump and I started to scrub it really low. The others are scared a bit and jumped high. I could still manage to gain some time, which was awesome. I did not check my sectors, but now you tell me. That feels good.

Did you have a plan in the second race? Once Herlings and [Antonio] Cairoli both crashed, it was kind of yours for the taking. Was it just basically go balls out and see what happens? You took two seconds out of AJ on the second-to-last lap. Did you have a spot picked out for the last lap or was it just pin it and see?

Honestly, yeah. Second-to-last lap I just tried to close the gap because obviously there were two in-between so he had a gap. I could manage to close it and then once he smelled me on the back of him, he found a bit extra again as well. I came close, but he did not make a mistake. I didn’t really have a spot ready for him, because he was really riding an awesome race too. I was closer to Glenn [Coldenhoff] last Sunday to get him than AJ today for whatever reason. That is how it goes.

Does this feel different now? Does this feel like the MX2 days? Are you sat on the line like, “You know what? Screw you, screw you and screw you. I’m going to the front and I want to win.”

Honestly, it’s getting a lot closer to that. Last year I started to become a guy and I started to be standing on the podium but just as I have mentioned before, many had been inured. Jeffrey was not there. Tony wasn’t there. Clement Desalle was injured at one stage. If I finished third on the podium, then I could have kind of been sixth also because some strong guys were missing. Now I’m in the game with all those names in it. This is the difference, of course. It’s like you say. Now I stand at the start line at the moment knowing I can actually beat all of them. That’s super good and positive.