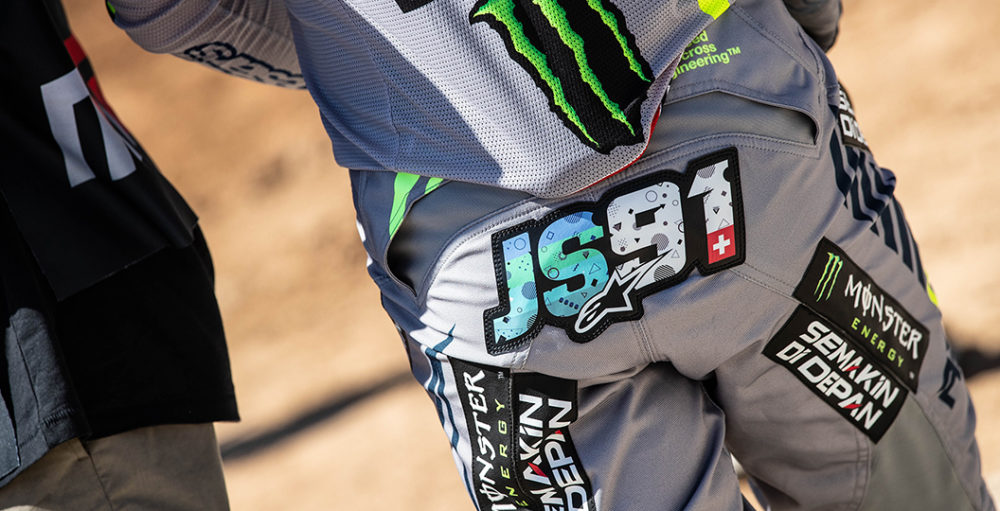 Jeremy Seewer was arguably the star of the Grand Prix of Latvia. A lot will be said about Glenn Coldenhoff, Tim Gajser and Romain Febvre. Those riders stood on the podium and deserve the praise! Seewer was arguably faster than all three and so close to a maiden premier-class victory. Seeing as Seewer did not partake in the post-race press conference, because of his lack of silverware, MX Vice editor Lewis Phillips caught up with him for a socially distanced chat about his breakthrough ride.

MX Vice: A great day from the very beginning. Qualifying was great, the first moto was great and then the second moto was amazing. First of all, the speed through the waves on the last lap of the second moto. Oh my god! I’ve never seen anyone stay that low and go that fast through them. That is the achievement of your day. Congratulations.

Jeremy Seewer: I mean, it is. I also felt it myself, that this was fast. I also put all in on that sector, because this was my strong point all day for some reason. My bike worked just awesome. I had so much confidence already in the first moto. I did not do anything special. For some reason, I just passed guys there. I just went without taking big risks or going sideways. I just had a good flow. In the second moto, on the last lap, I just knew if I [was going to] get Glenn [Coldenhoff] it was going to be the waves. I put extra effort in, and it turned out well. I went super-fast. I went next to him, but it was not enough – Glenn was not bad either. Sadly, could not get him, but it still felt awesome to go through the waves like that.

The sector after the waves, which I guess was like the start straight and coming back down pit lane, was where Glenn was really strong. Did you know that? Did you kind of see the waves as your last opportunity to make it happen?

Yeah. I knew he was strong after, even though the start corner before the pit lane I actually cut him off and I was kind of next to him on the inside. For the next left he was inside, so I could not really cut him off or anything. It did not work out. Four more corners to go, and that is where Glenn had super good lines. There was no way to get around him really in the last sector, like you said, so that was it. Could not get him.

What about your mistake like five laps from the end where you just over-jumped the sh*t out of that single? I am guessing you did not mean to. You were not trying to step on the table, were you [laughs]?

No. I jumped far every lap over there. It was just on this lap I landed one meter or half a meter too far left, which was soft. I did not really expect it to be that soft, otherwise I could put my weight in the back and get out of it. I jumped far every lap, like I said, but the jump before you land in two ruts. One time you take one rut more left and one time one rut on the right side, because you do not really see them. I probably caught one a bit more on the left on that lap, but I still sent it and just landed too far left. My bike just stopped on the landing. It was not a scary moment for me, because I just had to hold on and wait to go again. I lost some time though.

We kind of talked about how your speed in China last year was the first step, then the next step would be having the speed without making mistakes. I guess we are at that phase now, right? Do you feel like you have kind of mastered that on the 450F now, having the speed to win and also the consistency at the same time?

I think so. I felt that after the last few weeks and months of training, I could make a step with the speed and with the way how I can push a 450 around the track. I trust it more. I can go a bit closer to the limit without making those mistakes. It paid off today. It is really, really positive to see that. For sure, I am happy about it.

What are your thoughts on the one-day format? We are going to be doing it a lot. In the press conference [Jeffrey] Herlings and [Romain] Febvre said that it is the best thing ever. [Tim] Gajser said that we need two days. Where do you sit?

It is nice, as a rider, because you can get your job done in one day. You can focus on that one day and you can bring it. I think for the sport in general… The way motocross grew up and the way fans want to see us, two days is just nicer. Most fans at the French Grand Prix or Italian Grand Prix come to the races on Friday and have some beers, knowing tomorrow is quali. They basically spend a full weekend at the race enjoying themselves and, having some parties.

For them, it is kind of holiday and they love to see us racing on Sunday. A one-day event is going to change this a bit, so we take a lot away from the fans. I do not know if it is positive. That is where we get the money from at the end of the day. I enjoyed today, from the point of view of a rider. You have a qualifying practice and two motos. We basically just started and now we are already done, so that is nice to get two motos in like a practice day and that is it. We do another race Wednesday.

I guess the thing is that all of the riders say they want one day because, like you said, you get in and you get out. If we did the one-day thing next year when we are allowed fans and it is normal, you are going to be made to come to the track on Saturday anyway. You are going to have to do signings and all of that stuff. You are never going to get a one-day thing, no matter how hard all the riders want it.

Yes. I do not know. Now most of them… I travel Friday usually. We go one day in front, because of the corona story, but I do not know what happens if we do only a race on Sunday. When do we arrive? Do we travel Saturday then, which is kind of weird? I don’t know. Maybe it is going to turn out that we travel Friday on anyway, so what is going to make the difference? We will see.

A couple of riders have said this is the sketchiest they have ever seen Kegums. What do you think?

I agree. It is quite sketchy, because I think this is the latest that we have come here. Normally we have been here two or three months earlier. It is not mid-to-end summer like now. I have to say, the bumps are not huge. It is not that it is crazy rough. It is just super square-edge bumps and hard underneath. They cannot really get it soft, which is normal at this time of the year. It is sketchy. I agree, but it is the same for everybody. There are still good spots to pass. You can make the difference. It is technical. That is motocross.

Seeing as you said about it getting soft. My opinion is that with racing on Wednesday and Sunday, the base is only going to get harder. It is just going to get ridden on more and more. I just spoke to [Calvin] Vlaanderen and he said he thinks it is going to get softer. Are you Team Lewis or Team Vlaanderen?

Team Lewis, because racing on it… It is getting harder and harder, sure. Sand goes away and every bike takes sand back to the paddock, they wash it off… They do not bring it back. Maybe they saw the racing now and they want to get some changes done. Maybe they are going to get a thing to rip one metre? If they could get the hard base away with a machine, then it can be softer. I think it doesn’t get softer from us riding.

That would help too, because it looked hard to pass today. I guess if it was softer and opened up a few more lines, that would then make for better racing. I cannot see it happening.

Yes, I agree. It was not easy to pass, but still you had some spots. Especially, okay, in the first 15 minutes everybody is fast, but that is the 450 class. You will get that on most of the tracks. The level is high, especially after five months of training. Everybody is ready, but you can still make the difference with ten minutes to go. People start to get tired. If you are quicker, you will get in. Let’s see Wednesday if it gets softer.