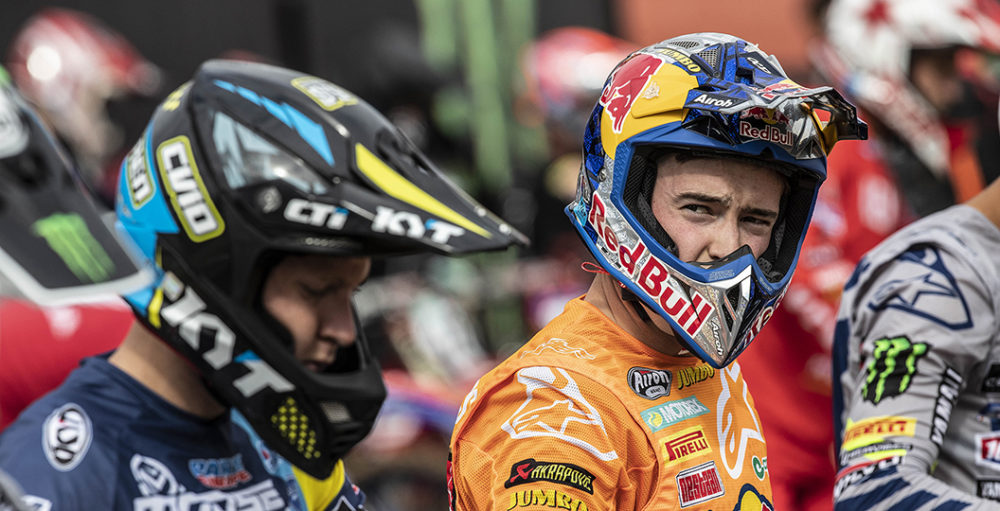 Jeffrey Herlings has been talked about a lot since the Grand Prix contingent descended upon Latvia, as the dominant force that is #84 has not won a single moto. Shock! Herlings is quite candid about that, including throwing one away on Wednesday, in this chat from the Grand Prix of Riga. It’s worth noting that he also suffered a concussion five weeks before leaving for the return of the 2020 FIM Motocross World Championship, which is also discussed at length in this MX Vice interview. Enjoy!

MX Vice: You were yourself and your speed was amazing. Your sector times were amazing, then you were not yourself when you crashed while you were leading. You have also built 30 points onto your championship lead, so that’s amazing. I don’t know how you look at today… There is a lot to it.

Jeffrey Herlings: Yeah. That sums up my last two races. Start crashes two out of four [motos in Latvia]. Three times coming from almost last to the front guys, so it has been a tough journey so far. Some riders have it worse so I cannot complain. Especially coming into it, like last Sunday wasn’t good because I had a start crash and a really bad start in the first one as well. I managed to get 4-4 and lose a lot of points in the championship, like five. Today, coming here, we really wanted to go for the win. Actually, we were supposed to get the overall until two laps to go my front end washed away. We got sent back. It is like it is. We got one more chance on Sunday to get it right. We’ll see how things will turn out.

Knowing you, I presume you are pissed off. Are you actually though? Like I said, there is a lot of good to come out of today.

Yeah, championship-wise a lot of good came out. I never want someone to crash, but due to those crashes I made a pretty big points gap to Glenn [Coldenhoff] and obviously mainly to [Tim] Gajser. I think we were 28 points or something. I don’t know exactly.

I think even more? I don’t know.

Really? Having the points lead right now in a corona year, let’s say, is pretty good, because you don’t know what’s going to happen. After Valkenswaard, nobody expected we would not race for five months at that event. Maybe this could be the last one? Maybe we will still have 15 GPs? I don’t know. It’s better to have the red plate on there.

I think we actually need to go back a bit. I think it was five weeks ago that you knocked your head. That was three weeks off the bike, right? Coming into here you would have had two weeks of normal riding.

Two and a half. I did one and half, and then I did a race in Holland. Then another week before coming here. Basically, two and a half to three now.

Were you feeling that on Sunday then? Were you a bit race rusty?

Yeah, especially last Sunday. That’s why in the second moto… Normally I’m really strong at the end of the motos. With the concussion, I was not out for really long. Maybe 20 seconds? When you break a bone you know it hurts. It’s not good. With the concussion, the next day I felt perfectly fine. I felt like I could start riding again. With a concussion you really just have to be smart. A lot of riders have issues afterwards, so I wanted to really take a break as long as I could. That’s what we did. Now I don’t have any issues. I couldn’t do any off-track training and nothing on track as well. That’s what made my physically go a little bit down. Those were the three weeks I was supposed to train the hardest coming back, but I had three weeks of basically being on the bed.

I guess even less than your physical fitness, the thing that you lost that maybe was more important was intensity. Like you say, that would have been the time when you would have been hammering out sprints and motos. It was the time where you would just be getting that sharpness back that you can only develop in the weeks leading up to a race.

Yeah, definitely. I haven’t had so many races. Some of those guys have three or four professional races. They went to Czech and did some races in Holland or wherever. I just did one and then came here. I haven’t raced for like five months, and I didn’t race that much last year either [laughs]. This year not so much either, because we just had two races before the corona hit. I think today was a good day for the championship.

Everybody is so competitive right now and everything is so close, normally on tracks like this five years ago you would have had way bigger gaps. Now number one, two, three and four are so close to each other. It can be anyone’s race. It’s been some amazing battles and amazing racing so far. We are looking good right now. I’m feeling fit. I haven’t done any major crashes. A little tip-over last week and same today, but no injuries of that. All good. We are going to head up to Sunday motivated and, like I said, my last chance of at least winning one race over here.

You say that five years ago we would have had bigger gaps on this track. Yes, the field is deeper at the moment than it has ever been. Is the track not different this time? I feel like it’s harder to pass and harder to make a gap. I don’t know if it’s because we are in August and it’s drier with a harder base, but I definitely feel like it’s not the normal Kegums.

No. It’s harder. It feels harder and it feels more difficult to pass. I haven’t been here in deep, deep summer like it is now. Last Sunday was really, really hot. Normally for other years it’s a little earlier the races and just prep for one week, but now you have three races here. I think it’s good… The three races thing. I think the more races we can click off the better with this virus going on. If the championship doesn’t stop for any reason whatsoever, then at least a real champion can come out if the championship needs to be stopped one day. Hopefully it can continue like this and we still have a bunch of races to go.

Just a bit more on that second moto. Firstly, the crash. What happened there? Whilst I was waiting for you here, there was a lot of talk about you looking back a few times. Was that it?

No. Normally when I would enter the waves I would look to the left, and I think [Arminas] Jasikonis was second. I could see him coming. I saw him coming, but at the same time my front wheel just washed away and then I lost balance and just tipped over. My bike was basically in the wrong direction, so I had to make a spin. That’s why I lost some time. It can overcome the best, I would say.

That just reminded me. The waves would normally be where you are the strongest, but the second moto the team kept telling you that you need to be better in sector two. Any reason for that? Is that just the same thing? They are harder. It’s not the sand waves section that people would think.

It’s not a sand track this one. If you get to Lommel on a good day, that’s proper sand. This isn’t sand. It’s not a hard track either, but it’s really sketchy with hard bumps and things like that. Not the Kegums where I started racing ten years ago when it was pretty deep sand. Throughout the years it got a bit harder.

When you got up, you immediately hammered down. I think you purple in sector one the first lap after your crash, and then again the lap after. I guess that was just you being pissed off and wanting to win.

Yeah, I was pissed at myself. It was no one’s fault, just myself. I was like, “How could you be so dumb to throw it away with two laps to go when you have a comfortable lead, like a few seconds? No one pressuring you from the back and the GP win was right there.” To mess that up it was like, “Dude, what are you doing?” Now I’m calmed down again. I’m like, “Let’s go get them again in four days.”