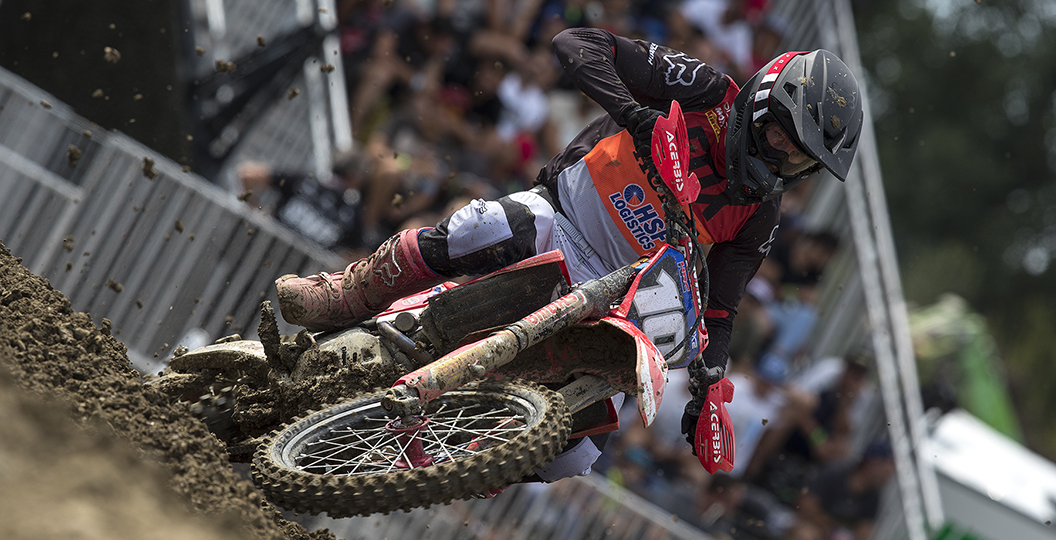 There is a lot going on with Calvin Vlaanderen at the moment. Vlaanderen is currently working on finishing his MX2 career on a high, whilst trying to find a ride for the new season and prove that he deserves a spot on the Dutch Motocross of Nations team. There is so much going on! All of that is discussed in this exclusive MX Vice interview from the Grand Prix of Italy, where he finished fifth overall.

MX Vice: I feel like this was actually a really good weekend, better than maybe the results even showed. It wasn’t the best track in the world… It was difficult to make progress, but you probably made more passes than anyone else. From that perspective, it was pretty good. I guess you kind of showed what you can do.

Calvin Vlaanderen: Yeah. Hopefully I get the hard-charger award this week. Yeah, it was a little bit of an up-and-down weekend. I thought I had a little bit more in me in both races. Unfortunately, the results don’t really show my riding. I felt actually pretty good out there. [This was] the first GP this whole year that I haven’t changed something on the bike, yesterday in practice. Anyway, I felt good. Unfortunately, first moto I had a bad start and had to come through the pack. I think outside the top twenty to eighth. It burned me out a little bit for the second moto, but I was happy to finish third in that second one.

What happened to your starts? They were not good. I feel like they are normally okay. You are not taking the holeshot every time, but they are better than that.

What did you think of the track?

If this is actually a level for MXGP tracks, I think it’s really going downhill. For me, it was really dangerous and really sketchy. Like I said, not on the standard of a motocross world championship track.

They obviously made some changes compared to last year. I can kind of see what they were doing. They were obviously trying to slow it down, with little chicanes, but it did not seem to work. I still felt it was just as fast and just as sketchy. Fair enough, they tried, but it just didn’t work out.

Yeah, they tried. For second moto they actually ripped it in some places. I was like, “Why didn’t you do that the whole weekend?” I don’t know why they didn’t rip it the whole weekend, like they did before the second moto. It was actually pretty good ground underneath. Just some places shouldn’t have had water on. In the first moto I had a bad start and had to come through the pack. My helmet was super heavy, because of all the mud. It was almost like a mud race out there.

Like I said in the interview before, they try their best with what they have, but also before the weekend they should have made… When they took the sand, they should have taken the rocks out of it, like a sieve where the rocks could kind of come out. When I walked the track on Friday there were rocks the size of my head out there, which is pretty dangerous. Maybe they need to spend a little bit more time preparing the track before the weekend and make more places to pass.

Any sketchy moments where your life flashed before your eyes?

To be honest, I didn’t really take any risks this weekend. I was quite… Not scared of the track, but a bit nervous of going down. If you go off the track and you land on the tar, it can hurt really bad. I didn’t do anything stupid. I actually didn’t have any of those sketchy moments.

You made a lot of passes, like we said, so did you actually have a spot that you had picked out where every lap you knew you could make a move? Was it just kind of circumstance and you picked them off when mistakes were made?

I had two places on the track where I could kind of pass, but I had to set it up a few corners before already. If I made a mistake in those few corners before, it was so difficult to make that pass happen. Actually, when someone is in front of you, you are just trying different lines. Outside, inside and outside, inside. It’s good for me, because I normally struggle with passes, so coming through the pack today I actually felt quite good.

If you can even remember last year here, better or worse? I don’t think it was this bad last year.

I think worse. My riding was better, but the track was worse.

Next year. Things are happening, I guess. I don’t think we have even spoken since you found out you are not back here [Team HRC] next year. You know that. That’s fact. Apart from that, what’s kind of going on?

Yeah. Like you said, I’m not here next year, which is a bit of a disappointment. I feel like I deserve to be here. I’ve shown that the last two years and I’ve done quite a bit for Honda in MX2. A bit disappointed to not get the ride in MXGP. Anyway, putting that aside, trying to look forward, trying to stay positive and get good results. I know something will come up, but it’s just not coming up at the moment.

I’m chatting to some teams here and also in America. We will see what happens. I’m obviously looking for a good bike and a good team. I don’t really… I’m not looking at the money at the moment. I just want to pay my living costs. That is it. I know that I have the speed to run top ten and top five in MXGP next year, so it will be interesting.

You should be better on a 450, right? Bigger guy. You are not one of the MX2 guys who just hangs it out and is almost killing themselves everywhere. Both the type of racing in that class [MXGP] and the bike should suit you better.

For sure. I think that I’m definitely a better 450 rider. I think I will show that next year. I think next year I will surprise quite a lot of people on the 450. Give me a few months to prepare for the racing and I’ll come out swinging next year. I’m looking forward to it. Hopefully I’m on a good bike. Good team behind me. I think my riding style will suit a 450 really well. Just got to get some good starts and run up front, get that experience and just build. Obviously next year will be my first year in the class if I stay in Europe. I think it will be a good year.

Whenever a guy wants to go to America, they go on about it non-stop. Like Tim [Gajser]. You cannot shut him up about America. I saw on a Racer X Instagram post like three months ago, you randomly started talking to a fan saying that your dream was to race in America and one day you would be there. That literally came out of nowhere to me. I feel like you have never told anyone this. You are talking to teams out there and you would quite like to give it a go?

I think it’s just something new, a new experience. It would be cool to go and race the series over there. The teams that I’ve spoken to are like, “How is your supercross?” I’m like, “Yeah. I rode some supercross when I was on 65 a little bit.” Coming to Europe, riding sand tracks and motocross all the time, it’s been difficult, because I haven’t had time on supercross.

If I were to go, I would definitely put some time in on supercross first and get a feeling for it. It would have been nice. If I was staying in the team next year, I would have liked to go with Tim for the Monster Energy Cup. Not race, but just go for the training and get some time in on supercross, but unfortunately that’s not happening. Yeah, it will be cool to go to America and race. A new experience.

Big question with the ‘Nations is whether it’s going to be you or Roan Van De Moosdijk in MX2. From what I hear, the team will be announced on Tuesday [the news is available here]. You cannot say anything, but do you know if you are in or not?

If you say yes, that means you could have been told that you are not. I guess we’ll be able to tell from your voice though, won’t we?

Yeah. It’s a really funny situation. I’m in, but I’m also not confirmed yet.

That just doesn’t make sense at all.

Exactly. I’ll be at the ‘Nations, riding or not. On Tuesday it will be announced. For you guys, it won’t be anything special. Still, the actual announcement for the third rider will only come later on.

Basically we are being told on Tuesday that [Jeffrey] Herlings and [Glenn] Coldenhoff are in?

It’s between me and Van de Moosdijk.