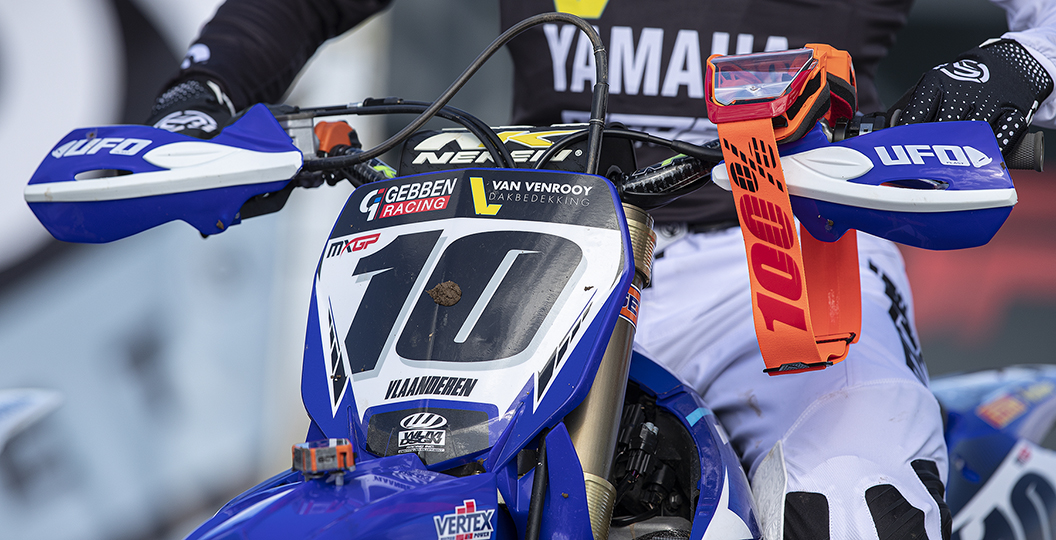 Calvin Vlaanderen has not had the start to his premier-class that he would have wanted – one point has been acquired during the first two rounds of the 2020 FIM Motocross World Championship. There are a lot of different things that have contributed to that though, most of those being out of his hands. Vlaanderen breaks all of that down in this candid MX Vice interview.

MX Vice: We will actually talk about that injury that you had in December first. What happened exactly, how did it set you back, and what did the months of January and February look like for you?

Calvin Vlaanderen: That was not really an injury that we were hoping for. I was training at Grevenbroich trying to get used to the bike, and we were actually testing some suspension. It was the last lap of the moto and last lap of the day. I just came around a corner and just fell over, because it was so muddy and slippery. I put my leg out to stop the bike from falling over and it just twisted the knee. It was painful straight away, but I could still support it. I have done my ACL before and know how that feels. It was not the ACL.

I drove home contemplating whether I should go to the doctor or not and they told me not to worry, just to take two weeks of rest and it would be back to normal. I flew back to South Africa – my brother had a thing on that I had to go to – and it was just getting worse and worse. I could hardly walk anymore, so I had another scan done as soon as I came back. The first time that I went I did not get a scan done. The doctor I saw just thought it was all good after doing a check with his hands.

The guy said, “The meniscus is torn, and we are going to have to operate.” We just operated that day, luckily, and I could get out of there to get the recovery going. The doctor said it would be like three or four weeks of recovery, but I was back on the bike after like four weeks and it was just so tough to ride. I still had so much pain and swelling. I was in Spain at that time, so I was trying to ride as much as I could. It was not anywhere near proper training though.

The first week that I had proper training was the week before LaCapelle [Marival] – that is why I did not race at Hawkstone. I actually had not had one good day on the bike yet. After Hawkstone I had like two days, because I went to France, and I just thought I may as well race. I needed the race time before Matterley anyway. I did that and it was fine, but I was really far behind where I needed to be with speed and fitness.

You rode before the injury, obviously, so had time on the Yamaha. Did you actually get testing done though? Were you just logging motos before the injury to get used to the bike, thinking that you would have another two months to hammer down?

I started testing quite early on, to be honest with you. The testing here is quite different to the testing at Honda though – here you just have your suspension testing. I just rode my training bike at LaCapelle, which was standard, and then the week before England I rode my race bike for the first time. Before then I had not really done any engine testing or stuff like that. It was just before England that we did our first engine test.

I was riding and there was still a lot of suspension testing going on, basically every day at the track. We are lucky enough to have the guy who is working with us on suspension close to the workshop – he comes out whenever we need him. I just asked for him to come along for most of the training days before my injury.

At those first two rounds then, was it a case of working through things as you went? Trying something in free practice, throwing it out if it did not work and then trying something new next time out.

Yeah, that was one thing I was a bit frustrated about. I wanted to come into the MXGP series one hundred percent ready to be up there. It should not be a test, but it felt like a bit of a test for me and team with the bike and suspension. We should have done that before the race, but that’s just how it is. We were quite late with some things and also with my knee. It is unfortunate that we cannot ride now, because everything is closed with the coronavirus. I was hoping that we would get a good few weeks of riding and testing done before the next round. We are just going to have to wait until we can get back on the bike.

I guess the thing people have got to remember is that it is a new bike and class for you, you have never ridden with Solva suspension before and the team has never dealt with Yamaha. There is plenty of new stuff to deal with on both sides.

Exactly. I do not think many people realise how difficult it is to change from one brand to another brand. When I changed from KTM to Honda, it was a big change and took me at least three months to get used to the bike. Again now, from Honda to Yamaha, it is a completely new bike and plus the switch to the 450F. I am not used to the Yamaha, even now. The first few laps, going out on the bike, I do not feel comfortable, because I miss my Honda in that sense. Not that I miss my Honda, but you get used to the bike after that many years.

The bike issues that you had at Valkenswaard. Was that the same thing in each moto or was it a load of different stuff?

It was the same thing on Sunday, both with me and [Alessandro] Lupino. I personally do not know what went wrong. Hopefully the team have it sorted out. It was an electrical issue on Saturday though – I went down on the start and a wire kind of moved to the point where it was touching the frame. After a few laps it just was not working anymore, which is why it stopped. It was a completely different thing that happened in both motos on Sunday though.

I guess you have not really had a chance to properly race in MXGP yet, because of different things, but are you stoked to be on a 450 with your size and everything? Is there a part of you that is watching MX2 and desperate to have another go at that class?

No, not at all. I am completely over the 250F. Even last year I was really looking forward to getting up onto a 450F. I feel like I was ready to move up last year. I have not really had a proper race on the big bike yet. I lined up in the first race in England – obviously we did not have a qualifying race – next to [Clement] Desalle and someone like [Gautier] Paulin. I remember that I went into that gate, and it is so difficult to change the mindset from someone who you look up to over to a competitor.

I had an awful start and I said to my manager after the race, “I did not know what to think.” I looked to the left and to the right, and just needed to focus on myself to get to the first corner first. It was the first time that I had ever lined up to them and for many years I looked up to them as heroes. Now I have to race against them, and it is very difficult to change that mindset. I think that it will come with time. I think that as soon as I get comfortable with the bike and my speed back to where it needs to be, then I think it will come.

I was going to ask you what you think your biggest challenge is, but I guess it is a combination of all of those things. First and foremost, you need to get comfortable with the bike and then after that it is the mentality thing… It all goes together.

I think the biggest thing is getting comfortable with the bike. I know that mentally I am quite strong, but just getting comfortable is such a big thing in this class. Everyone is either on the limit or dealing with perfection with their bike set-up and things like that. In MX2 it was a bit different, but now you have to be really specific with what you want. Getting comfortable on a bike that you have not had much time on is really difficult. I need to spend more on the bike and with the team because, to be honest, I am just not comfortable at all.

We have got this massive break now, and you are not riding at all. Is it helpful? I guess the team can look into the problems. Does this help with your knee? Is it one hundred percent? Is it just bike time that you need now?

The knee is one hundred percent. It was nice to get back to racing, to be honest with you, because I was improving each week. Getting behind the gate was good for me and I was enjoying getting back into the routine of racing. For me, this does not help at all. My knee was great. I do not know if the team are doing much with the bike or anything like that, so I do not think it is helping me or the team at all.