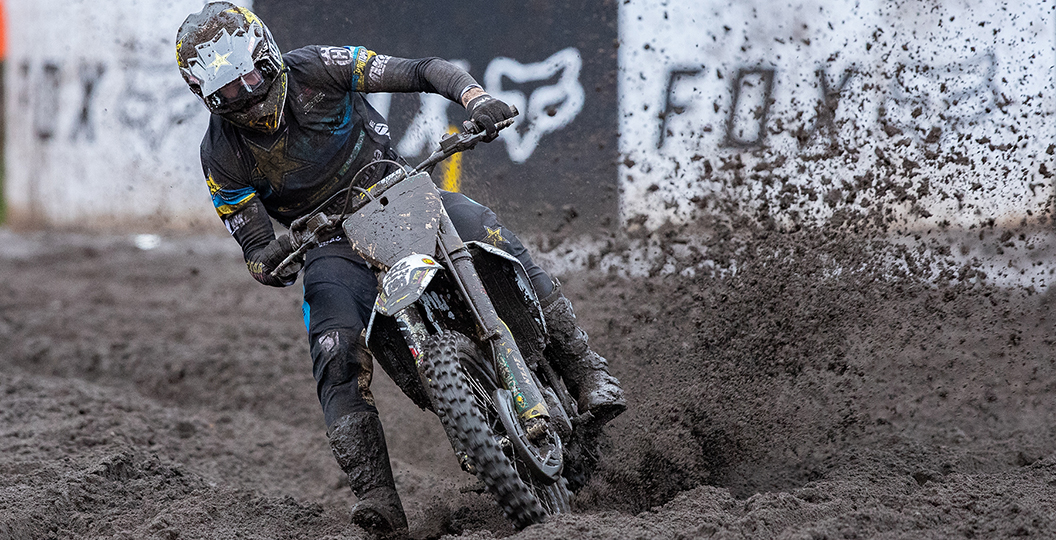 Arminas Jasikonis finally climbed up onto the Grand Prix podium again in The Netherlands at the weekend. It had been almost two years since he last did it in Portugal! Jasikonis was clearly deserving of a spot on the box based on his speed in both the wet and dry – some would have had him pegged as the favourite for the win. Was Jasikonis disappointed to not get a little bit higher on the box or just relieved to get the second podium out of the way? That’s talked about in this exclusive MX Vice interview.

MX Vice: Finally, third overall! I feel like this second MXGP podium of your career has kind of been playing on your mind for a little while, so nice to get it finally out of the way.

Arminas Jasikonis: Yeah. We have been good all weekend long. The last moto gave us a big challenge. We had quite a big crash, I would say, because the bike came on me. Then we had to pit stop for goggles, because it was so bad with the lappers and everything. It gave me a big challenge, but we passed it. We came there on the box, so it was really nice after the first GP that was such a bummer. We managed to turn it around, so I’m really happy.

Everyone keeps saying this is a weird Valkenswaard. It’s not like normal. It was obviously softer, wetter and all of that. You were still as quick as normal, despite that, but did you still find it weird?

When I was on the fast laps, I could feel it quite normal. There were some sketchy places, for sure. The bumps were not like they usually are, but we are all the same in the end and we had to race the same track. I still enjoyed it. If I get on the box, for sure I will not complain about the track.

You are going to tell me this is a stupid question, but here we go. You won yesterday. You went through the fastest guys. Any bit of disappointment that you were not more in the race for the win today?

Yeah. I already talked about it. I had time to think already. Yes, but that podium has been in my head for a while. We had to get that out of our way. Even in the first and second motos, in the first laps I could keep with them easily. It was just playing with my head, the podium thing, later on. I tried not to think. I even tried to concentrate on racing, it was still playing there. I think now we have got it out of our way, so we go to Argentina. We do the best as we can, and then let’s see what comes.

What happened in that crash in the second moto? I did not even know it happened. Was it really gnarly?

Actually, nobody knows. There was not even a video or anything.

I just thought you were slow [laughs].

Oh, well thanks. It was quite nasty. My complete ass ripped off and everything. I was riding and then all girls could see my ass.

Was that on purpose?

For sure not, because it was quite painful. I was standing up and I was so in pain. I was like, “F**k.” It was not easy. I had to drop my goggles, because I got so much water and everything somehow. It was quite, I would say, a big crash, but not something crazy crazy.

This is your second year on a factory team, and you have never actually had this stability. This is the first time you have actually been able to build on something. How much better do you feel, compared to last year, just from having that experience under your belt? Not just in the sand… Everywhere.

Overall, I would say we made it work with the bike better. Our physical condition is better, and riding is better. I would say we had a really great winter. My physical trainer made such a good programme. We worked our asses off. I would say that extra year, that is what we needed to kind of to prove that we are there. Last year we came out of quite a big injury and were struggling. It was not easy for me, but the winter made that difference this year. Everything made me even stronger. That is what we needed.