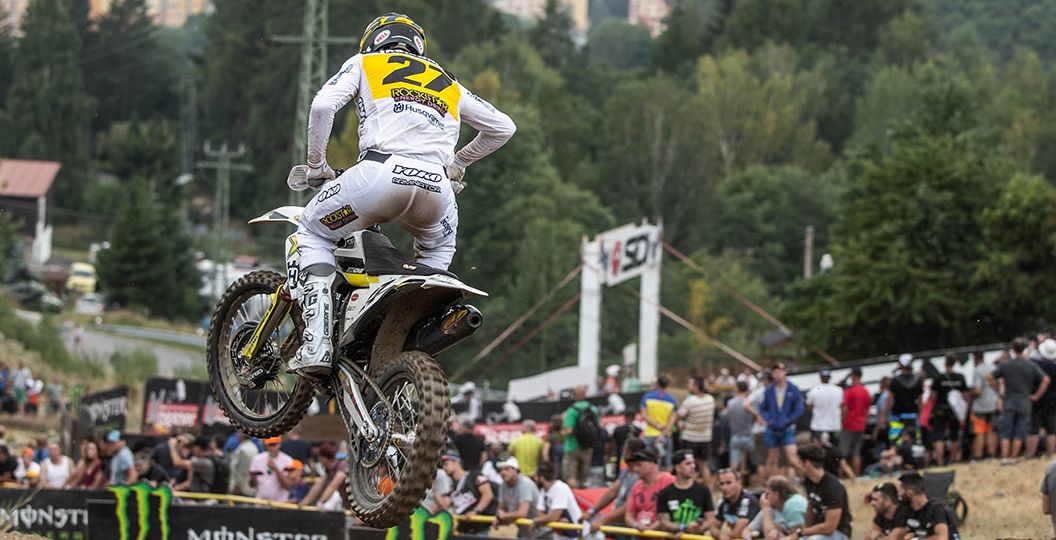 Arminas Jasikonis has had a turbulent time of it lately, but showed a lot of potential at the Grand Prix of Czechia. The hard-pack surface of Loket is not exactly to his liking either. Was Jasikonis pleased with his showing, even though the results did not quite match up with his on-track performance? That topic is broken down in this exclusive MX Vice interview, as well as just how desperate he is for an Instagram edit.

MX Vice: After Semarang where you said that hard-pack was not your thing and you struggled, I kind of came in with meh expectations for you. All weekend I felt like the raw speed was really good though. You were charging. You were making passes. Lap times were good. All of that. I feel like, for you on hard-pack, this was a real step in the right direction.

Arminas Jasikonis: Yeah. Results do not really show that, but yesterday I had a crash in the qualifying race that made me dead last. In twenty minutes, I made quite a good step to come to tenth. My speed was good for top five. In the first moto I actually had not the best start, but we worked our way up in the first lap really well. I just tried to make a pass on Gautier [Paulin], which didn’t work. I tried a couple times and was close but not enough.

Still, fifth in Loket was quite good and quite a good thing. Just in the second moto I had the speed in the beginning of the race, but somehow at the end of the race I just clicked in and went too much on/off a little bit on the track and should have kept just that overall speed there. It wasn’t the best. Still learned from it. We made some changes coming to here with the bike and a little bit with me also. We found some things with the trainer, so it is good. We’re going forward.

Just to be clear: You are happy with this weekend, right? I feel like I came in with a lot of happiness and I am not sure you are matching it. We are happy, right? This was good.

No, it was good. It is a hard-pack race and there were positive and negative things, but of course. In the end I am healthy. When I look back, Semarang was the exact same result actually. That is what I thought… I was like, “Okay, this was not bad, but Semarang was the same results.”

I feel like you are confused about your results. I am just trying to make it clear for you.

No. Of course. It was good, but we still need to improve. That is for sure. There are positives.

Did your improvement on hard-pack this weekend come from having a team like IceOne behind you with their experience and knowledge? Did they kind of point you in the right direction and take you to a point where you are good on the hard-pack?

Of course. We have been working a lot on hard-pack. We had different settings with the suspension a little bit, so thanks to the suspension guy. He did a great job. He made me feel much better on the hard-pack tracks. Of course, we are going to work more now for Lommel. To be honest, I haven’t been riding so much sand, but we have still a week to go to Lommel and we have to prepare good.

Every rider I have spoken to has said this is the roughest Loket they have ever seen. Agreed?

To be honest, downhill bumps were quite big ones. I still could manage to find some flat places. I don’t know what the others are talking. There were still places where it was flat, but they were quite nasty bumps. That is how it should be. That is how a GP should be. The speed was lower, and it was kind of you could either get in a rhythm or not. It was physically more demanding. It was a proper track.

Onto Lommel. Thinking back to your Valkenswaard speed. That was good. You are good in the sand. You are good at Lommel. You are feeling good at the moment. You are healthy. Couple of the fast sand guys like Jeffrey [Herlings] and Tony [Cairoli] are out. This is all good stuff. Are we feeling positive? Tell me.

Of course. I’m feeling positive. It is coming the day that I waited for. I don’t want to go crazy about that, because I know once you go too crazy it can either work or either break everything. We will take it easy. We are going to show up there and just work the best I can. Nothing too much, nothing too less. Just try to do good motos, enjoy and get a good rhythm. That is all we need.

No, everything is fine. There were some people who promised me one and they are liars. That is the thing. That is what pisses me off. That is why I am being a little bit like, “Shall I give them interviews?”

That aggressive tone is not going to help you get an Instagram edit.

Yeah, but hands down about that.

Actually… Win at Lommel, which could happen, or podium… Deal. On record so everyone can hear it. Podium at Lommel, you get an Instagram edit. Done?

If you come fourth, no edit. Nothing. Not even a little edit. Absolutely nothing. Podium or nothing.

Even if I make podium, I am sure you guys will find a solution to not do it. Okay, deal.