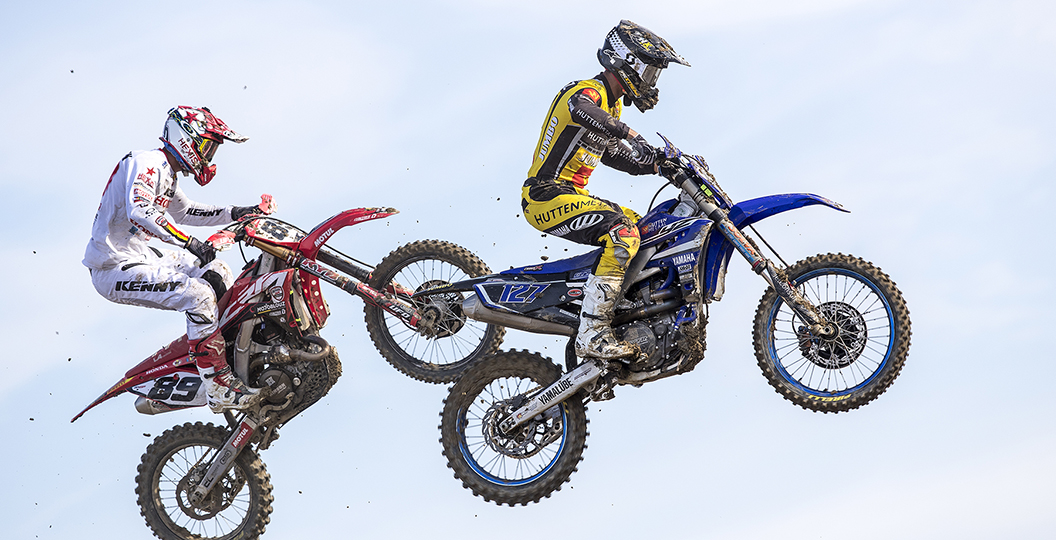 Anthony Rodriguez’s road to the Grand Prix of Italy was far from smooth, as he had to negotiate a tricky team situation and get accustomed a YZ450F. Points were the result of all of that hard work, however, so one could certainly argue that everything worked out in the end. What led to that series of events? Rodriguez covered everything in this exclusive MX Vice interview from the historic road-race facility.

MX Vice: You are back, again. We thought you had a back injury that would stop you from racing here and Sweden, but somehow that’s just gone away. I guess you are fine. New colours, a new team and a big improvement, which is surprising. Based on what I read, I didn’t think there would be one. It seems like this has helped.

Anthony Rodriguez: Yeah. I did tear a muscle at Lommel. That is correct. Then I did some physical therapy and it became better. The rest I’m sure you guys all know about. Yeah, it was a good weekend for me. I was able to put in a lot more effort. I showed some speed in the beginning of the first moto. I think staying in the top fourteen for quite a while was good for myself, especially just being on the bike a few hours. It was expected for me to get tired quickly. I’ve been flying all over the place.

I thought I was not going to race a few days ago, so I flew to Portugal. I had some family there that I could stay with for free and then I flew to Belgium. A lot of things have happened. I don’t know what I can say and what I cannot say. I’m a little bit frustrated with everything that’s been happening, but a new door has been open for me. I think that I showed some potential.

Next week I’ll only ride one day, because I already know the bike. I did a lot of riding here. I’ll save some energy for Sweden so that hopefully I can feel fresh and do much better. Just as you guys have read, I raced Keiheuvel and I didn’t do any better there. I got really tired for this weekend. Even though I was trying to push as much as I could, on Saturday morning I was already tired. We will work on that and improve. The future should be brighter than it is at the moment, even though it already got better.

Yeah, that’s correct. This is a subject that I will try to refrain from talking about, because to be quite honest they did try to make everything work. Things happened the way they happened. It’s sad. I wish it had worked out, but it didn’t. I just don’t want to say a lot about it right now, especially because I don’t want people to get the wrong idea. It’s frustrating, because we need a lot of people in the sport like BOS as well. We need teams. We need people with money to start teams so there are more spots.

They do need to be done correctly. It’s a tough subject to talk about. I don’t know what I can and cannot say, but as you all guys know it wasn’t a tooth-fairy story. It was a bit of a stressful situation for me. Honestly, it put me in a dark spot. I didn’t know what I wanted to do. It was one of the most challenging things I have had to overcome mentally. It opened new doors for me to understanding what people have gone through when they talk about mental issues. Now I can understand what they mean. I’m glad that I was able to bounce back from that and I’m looking forward to continuing to improve.

You knew the MXGP class was going to be tough. It was always going to be more difficult than MX2. When you got to Loket, were you surprised by just how intense it is and all of that?

I don’t know all of the statistics, but I’m sure everybody in front of me had a podium in MXGP or MX2 race at some point in their career.

Thinking about where you were, probably.

It’s a stacked class. It is an honour for me to be battling with guys like Tanel Leok. I’ve seen him race since I was probably like twelve. I think my best lap time was three and a half seconds off of the fastest of the race, which considering the situation… It’s not a whole lot. There were sixteen guys in front of me and they are all really close in speed.

It’s a challenging class. I’m glad that I get to battle with these guys, but I’m sure in other countries being three seconds away from the lead may get you a top six. It’s definitely a bit different, but it’s a challenge that I like. It’s a personal goal for me that I just hopefully want to try and break into the top ten by the end of the season, if I get to go to the overseas races.

Odd, because I thought you’d say this made you worse. Next year you obviously want to stay here. The whole reason you are really here is to kind of audition for a spot. When you were not here, everyone in the paddock was saying good things about you. Apparently, you are quite a good rider to have on a team. Have you had a lot of love since you have been back?

Yeah, it’s obviously great seeing all the people that I worked with last year and people who I worked with from HRC in 2017. Every time I see Dominic, who works at Dunlop, he is a good talk and a good catch. I do have a lot of friends here in the paddock, and riders as well. I’m not going to go into names, because then I’ll be naming too many people. It’s cool to come back here and see that I’m appreciated to be back.

I did come here, because I was honestly in a bit of a desperate situation in America. I didn’t even have a bike to practice on. I was just doing cardio. I think all put together, all year round, even including the supercross training that I did with a loaned bike, I may have close to three months of training this year on an actual dirt bike. I’m talking about less than thirty days of riding this year. When I saw a door opening here in the MXGP, there was no second guessing for me.

I asked a lot of people a lot of things and some of them were not positive. Some of them were positive thinking about a future scenario, but it was all I had. I either continued to do road bikes and go to the gym for a while or take this offer and ride a dirt bike. That is one thing that I was thinking during the race. Second race, I had a rock hit my collarbone. It hurt a lot. My pants broke and came down.

I don’t know if you know how the Yamaha seat has that cap in the front, but I lost that. My butt was hurting quite a bit. It was like sitting on sand paper. I had a lot of issues. I was just like, “You don’t get this type of training quite often.” The track is brutal. There’s a lot of racing. I continued to push as hard as I could. Actually, when [Glenn] Coldenhoff lapped me I tried to follow him to see what lines he was taking. There is no better training than that. I’m just taking the advantage of every lap that I get to do to try and become a better rider.

The good thing for you is Sweden will be a good track for you. I don’t know if you have ridden there before. I don’t think so. Turkey, which you know, is a really good track for you. If you keep building race fitness and get accustomed to the Yamaha, there is an opportunity for you to do well.

Yeah, of course. Yes, this class I believe is tougher than what I was racing last year, but I think everybody was a witness of how good I can improve. Last year I came in with no preparation. By the end of the season, I was doing a ton better. I hope I can do the same this year. I already got a lot more confidence. I hope it doesn’t sound cocky, but I think I’m just going to get better every weekend. It’s meant to happen.

To do what I’ve done with just a few hours on a new bike with new suspension and everything, it’s quite impressive for myself honestly. Yes, a seventeenth and a nineteenth are not great results but, like I said, my lap times were not terrible. Being three and a half seconds a lap slower from the fastest guy in the world, it’s just mind-blowing. Even though I shouldn’t be happy, because my results weren’t the greatest, I’m quite satisfied with what I did.

We are both bummed.

For sure and, as you guys probably know on social media, we are pretty good friends. I actually had texted him, “Hey, what time are you having lunch?” After he had broken…

That’s not a good move. That’s a dick move [laughs].

No. I didn’t even know he had broken his radius! I was like, “Sh*t. I feel bad now!” I texted him again like, “Shit, I just found out you broke your arm. Sorry about that. Hope you heal better.” Then I saw him. It was a tough situation for him. He was just getting a lot better and just getting a podium in Lommel. I hope he’s smart about the situation, because his last year is next year and I’m sure he can go for a top three. If it does good in the winter, maybe go for a title. Who knows? He’s a good rider, so I’d like to see him do good next year.