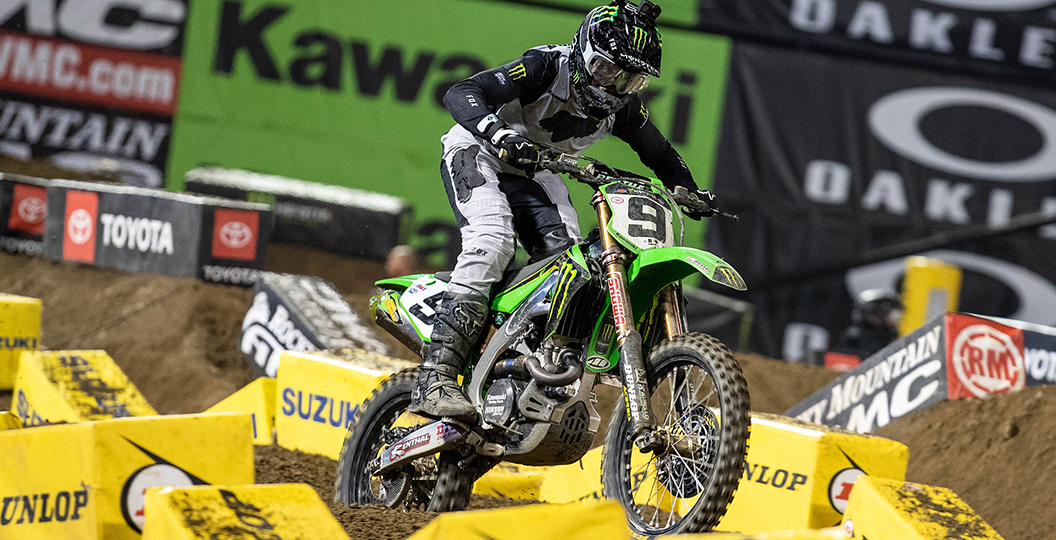 Adam Cianciarulo has had an eventful time of it recently. A gnarly fall at the fourth round of 2020 Monster Energy Supercross left him with a bruised tailbone, for instance, so things were trending downhill. Everything got back on track in Oakland over the weekend though – he battled for the win early on and kept it steady to take fourth in the premier-class main event. Was AC pleased with that though? MX Vice editor Lewis Phillips caught up with the Monster Energy Kawasaki rider at the RingCentral Coliseum on Saturday night.

MX Vice: You would want a podium, and you were right in the fight for the win so maybe you could have had that, but considering the last few weeks and the tailbone thing then I think this was good. This is a nice way to get things back on track, not that they were ever too far off track…

Adam Cianciarulo: I really feel pretty good about my season so far. A lot of rookies have really, really struggled coming in. If you think about the last group of rookies that have come in over the last four or five years… It’s hard. Even tonight, it sucks. You get fourth and are on the podium or whatever, but I rode really good for fifteen minutes. It’s just you have to be good those last five or six minutes to be a podium guy or to be contending for a win.

I felt super comfortable riding that pace with Ken [Roczen] and Eli [Tomac] in the beginning. I hate to be the guy who says, “Arm pump, arm pump.” I barely rode this week and I think that maybe had something to do with it though. It really caught up with me like twelve minutes in. I was a disaster after that. All things considered, I’m super stoked with how everything is going so far.

There is one thing I need to ask before I forget. After Cooper [Webb] passed you, I looked down at my phone and the crowd went wild because you did something. I have no clue what, so what happened?

I basically let Cooper by, because he was coming. He was going to the front as he always does at the end of the race, especially on tracks like that. He was riding well. I knew he was going around me so I was like, “I don’t want to get cleaned out or something, so just go ahead. Save it for another week.” He passed me in that left-hand corner and I went double. I damn near whiskey-throttled off the three. I almost quadded the thing into the corner before the finish line. I cased the jump so hard I thought I was going to do a front flip. It seems like at least one thing like that happens in races. I just learned to hold on tight.

I guess that was a nice little wake-up call to settle for fourth, because that is actually pretty good.

Oh, absolutely. I got a bone bruise on my tailbone and I can tell you I felt it in my teeth when I cased that thing. All things considered, stoked.

How bad is the tailbone? I guess it really was up in the air whether you were even going to race here?

Yeah. It’s just a bone bruise. I was in the hospital all night Saturday night getting scans and stuff like that. Sunday, Monday and Tuesday were rough. I was really worried about this weekend. Then it started coming around a little bit. I was able to do some starts and roll around the track on Thursday. Then another day of rest really helped me out. I can’t say it really held me back too much on the track besides just a lack of preparation.

You were fastest qualifier again this week, which is great. Amazing. Is there a little part of you that’s like, “Maybe second would be nice.” Then people can lay off the practice hype!

Oh, one hundred percent, but it just goes against what I’m about. I’m a fan of this sport, man. People don’t understand that I get it. Even I see [Dylan] Ferrandis… Every weekend he’s fastest in practice. I’m like, “Can you just give it a rest? Don’t try so hard.” But he does his best every time he’s on the track – that’s what I do. A lot of times I don’t even look at the board when I get done with a lap. I don’t even look at the board. I think I was third or fourth in the first session, and I’m totally fine with that. I just go out there and I do my best. I’ve always been super good at learning the tracks quickly.

Then I think just the new bike suits me really well and that’s it. It’s not a conscious effort. I don’t even think about it up there before I go out. Like, “I’ve been fastest a lot – let’s get this one.” Those guys are right there. If you are within a second and a half… First through twelfth is basically a second. If you are within a second, you are fine for the night show. Take fifth gate pick in the heat race. It doesn’t matter. My goal is just to do my best every time I’m out there, no matter what. If that’s fourth, that’s fourth. If it’s first, it’s first.

I guess this one was a nice surprise as well. Coming off of a week off effectively, you didn’t expect that at all.

Yeah, but I have a lot of confidence in myself. I think just a few days off the bike is not going to really kill you.

Last thing. We are five rounds in now. You have got some decent seat time under your belt. Is there anything that you have learned or know you need to work on moving forward just to tidy things up and get you to that next step?

No. I think the same things as always. I could have been in the fight for a win today if I was better in the last five minutes of the race. I can chalk that up to arm pump today. A2, for example, I was tired as sh*t. I could barely even ride. Just one of those tracks where I wasn’t flowing. Today it was arm pump, so it’s just about figuring it out.