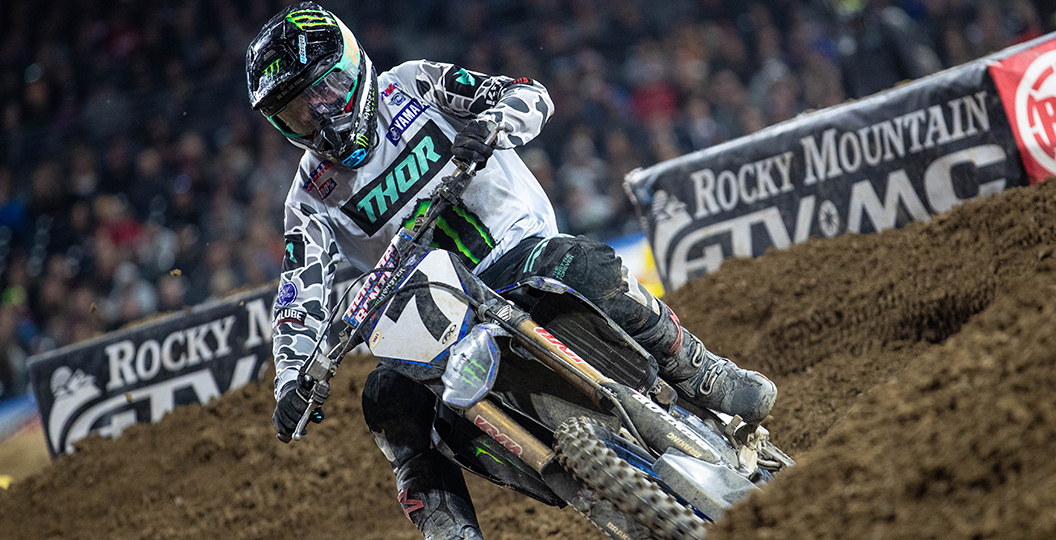 Aaron Plessinger is back! There was a sign of life from the Monster Energy Yamaha Factory Racing rider in the premier-class main in San Diego, California, as he started third and had no problem running the pace at the head of the field. A fall stopped him from fighting for a spot on the box in the end, but there were so many positives to pull from Petco Park. Plessinger unpacked everything that went on in this MX Vice interview.

MX Vice: We almost had the whole scenario of good start, run up front, finish good and break through. It didn’t quite play out that way, but this was still good. This has got to give you something moving forward.

Aaron Plessinger: Yeah, definitely. It was off to a great start. I don’t think I had the holeshot, but I might have. Adam [Cianciarulo] got me and then Cooper [Webb] got me. I was running right with them. I was confident. I felt comfortable. I think I could have ran that pace for a while. I just made that little bonehead mistake and it put me back a little bit. The experience was awesome. I learned a lot. Now I know I can run that pace. With a couple good starts maybe in the next couple weeks hopefully I can work my way up to the top five and hopefully a podium.

I think that’s one thing that people maybe need to note. You didn’t just start third and sit in third. You actually went after Cooper and looked like the fastest guy on track for a little bit. It wasn’t a case of you just sitting around like, “This is nice.” You were going.

Yeah, for sure. I was right on Coop’s wheel for a couple laps. I think [Blake] Baggett was behind me and I didn’t let that shake me at all. I was going after him. I was going to get #2. Anything could happen. Unfortunately I went down. We are going to go back this week with confident laps under my belt and come back in Tampa.

Have there been any big breakthroughs since last week that kind of led to this, or was it just a case of circumstance and a good start does good things?

We changed a lot on the bike this week, suspension-wise, and it’s showing. We worked a lot with Ross Maeda at Enzo. The KYB guys are really putting in the work. Sergio is amazing. The team is starting to link together. We’re all starting to speak the same language. It’s starting to show. Me and Justin are inching up, closer and closer to the top. I think in the next couple weeks we’ll be up there.

The problems that Justin has had recently and the results that he’s kind of found, have you been dealing with similar stuff? When he finds something, has it been helping you? Have you been fighting separate battles with the bike?

We are opposite with the bike.

Yeah. Maybe a few things will help me, but we are kind of the opposite. I’m on an air fork. He’s on a spring fork. He likes his bike a little more stink bugged. I like mine choppered out. It’s pretty different testing-wise. We have kind of been working the opposite battle. He helps me sometimes, but overall it’s all up to me.

When we spoke at A1 you mentioned how good you were at the test track pre-season and how good everything was rolling. Then you had that crash. You are still not quite back to that pre-crash form, are you? There is more to come.

Yeah, there’s definitely more to come. I’m working towards it. Tonight was close, but I really think that I can break through even more and come out. Once I get the confidence, I’m going to show it for sure.