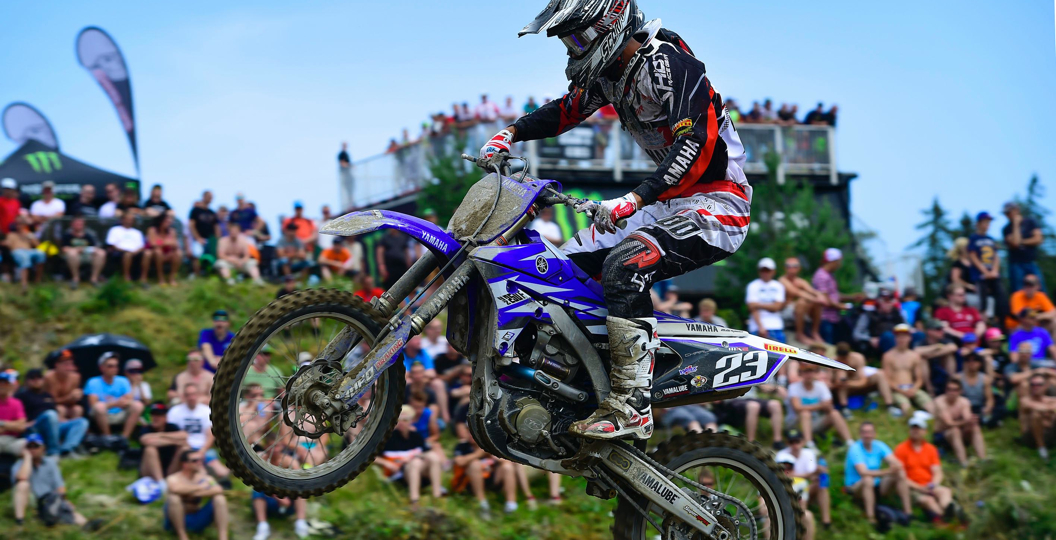 Warm temperatures and sunshine coated the 17,000 attendance and the shallow bumpy sand of Hyvinkää where Christophe Charlier took Yamaha’s best finish today with fifth place for the Grand Prix of Finland and the thirteenth round of the FIM Motocross World Championship. The second Grand Prix of Finland at Hyvinkää (the small venue hosted FIM MXGP for the first time last summer) brought the teams and riders to the hard and rippling sand one week after a slippery set of motos at Uddevalla in Sweden. Temperatures touched twenty-five degrees and although the short layout was not too demanding – and even very quick in places – the sand soon became a mess of short lumps and holes. This was particularly tough for the riders in the second motos.

Charlier didn’t start particularly well but his aggression in the opening laps of both motos helped push him into top ten positions. The Corsican was lacking decent training time in the sand but this did not dent his determination and his fourth spot in the first moto came after he tracked Tim Gajser to sixth place. After the penalisation of Jose Butron and Dylan Ferrandis for overtaking on yellow flags the Yamaha man was bumped up to fourth. In the second outing Charlier fought some late race fatigue to take tenth place on the YZ250FM. The Grand Prix was notable for his best moto finish of 2014 and his highest overall classification.

Kemea Yamaha’s Petar Petrov was twelfth but the Bulgarian could have been much further forward in the Finnish ranking. He was part of a multi-rider crash on the first corner of the opening moto and needed to ride hard from last place and a big distance adrift of the pack to arrive to twelfth. His potential was shown in the second moto where a drama-free start meant he was set to pick his way past rivals and arrive to sixth position to equal his loftiest result of the season. Team-mate Luke Styke crashed on the first corner of the first moto and was struck from behind by Viacheslav Golovkin. The section of the track was under yellow flags for two laps while the Australian was treated. Eventually he was taken away and an initial diagnosis at the track indicated a stretched shoulder joint.

Bike it Yamaha Cosworth’s Max Anstie was not present on the scoreboard this weekend. The Brit made a decent start in the first moto and was fighting Jordi Tixier for a slot on the fringe of the top five when he crashed and knocked his head. Anstie was OK but the right side of his face was swollen and bloody and he was having difficulty seeing after the area around his eye socket started to swell.

Hyvinkää was also the scene of the penultimate round in the European EMX250 series. Nick Kouwenberg rode his YZ250F to a fine third position on Saturday and then in the second sprint on Sunday grabbed a sixth place to walk the podium for the second weekend in succession with third overall.

Petrov is still the highest placed Yamaha rider in the MX2 points table with 11th position. Anstie is close with 13th. Successive races for the FIM Motocross World Championship in Sweden and Finland now means a small break in the calendar and a free weekend before the final meeting in July at Loket for the Grand Prix of Czech Republic.

Christophe Charlier: “I’m quite happy because I haven’t ridden in the sand much and when I wanted to the weather was not good in Belgium. I didn’t get good starts today but I could pass quite a lot of riders in the first laps and I’m happy for that. My feeling was not great on this type of track but I was able to push hard and I’m glad. My physical condition was a bit weak for the final parts of the races. I know if I was 100% then I could have been top five all through the motos. I like Loket, which is up next, especially for the downhill start where my 83 kilos should not matter so much!”

Petar Petrov: “The weekend started well with the fourth place on Saturday. I was confident for the races but unfortunately I got involved in a crash at the first corner in the first moto. I had to start again at the back of the field and noticed my shifter was bent. I had to stop two times to fix it a little and only managed to come back to 15th. In the second race my start wasn’t good once again but this time I managed to pass some riders in the first laps. By the time I got to sixth the gap was too big to do any better but I was feeling really good on the bike. The speed is right there but it’s just up to me to get better results.”

Nick Kouwenberg: “It’s good to be on the box again but I’m not too happy with my performance. Saturday I wasn’t feeling too fit and I couldn’t follow the leaders but I knew I could do better on Sunday. In the second moto I had a bad start and tried to come forward as soon as possible. I couldn’t get in the rhythm though. I was struggling in the corners, hit the berms wrong and my timing was bad. That cost so much energy and I had nothing left. In the end I’m happy with the podium but it’s a bit bitter. Getting beaten straight up by two countrymen does hurt a little but Lommel is next and I will be ready to step it up there.”