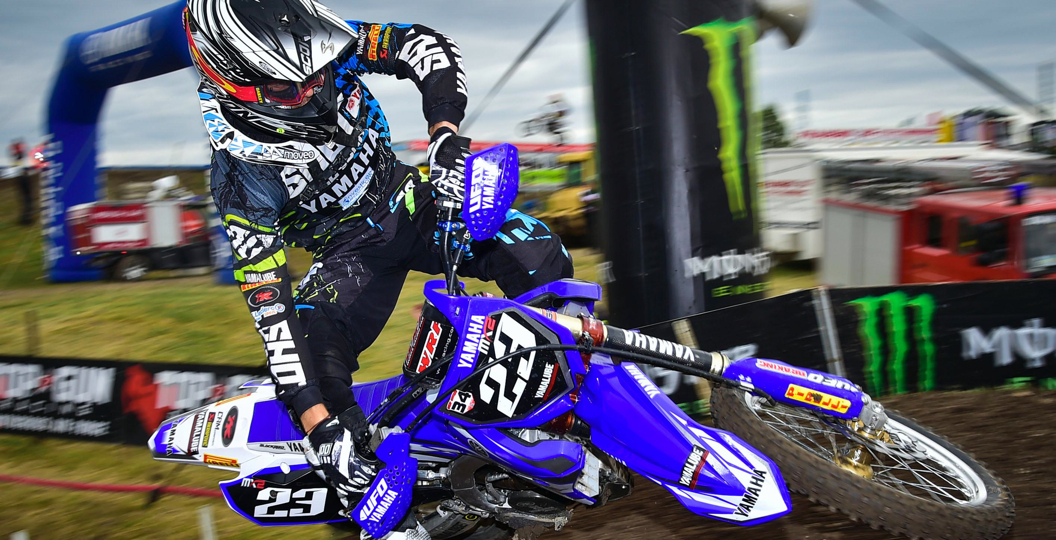 Charlier back on the gas in Germany

31,000 spectators came to a bright but windy Teutschenthal for the Grand Prix of Germany today and saw Yamaha count on Christophe Charlier to take ninth position overall for what is the eleventh round of seventeen in the 2014 FIM MXGP term. The hard-pack of the Talkessel circuit was restrictive in places and the bumps and ruts added an increased technical edge to the racing surface. The narrow and flowing layout shared similar characteristics to Maggiora in Italy last week and placed tall emphasis on the starts and the importance of decent positions in the opening laps.

Yamaha Factory Racing’s Charlier returned after knee surgery and was a welcome sight on the works YZ250FM. The Corsican had been training at home last week and felt ready to rejoin the MX2 fray. Naturally cautious and a little rusty, the former European Champion had a mechanical problem on Saturday that caused a lowly gate position for Sunday. Undeterred Charlier fought hard and exercised some of the frustration that has affected his 2014 season so far. He rode to tenth positions in both motos for ninth overall and a return to Grand Prix that can best be described as encouraging for the rest of the campaign.

Kemea Yamaha Racing’s Petar Petrov was twelfth overall. The Bulgarian classified a personal best of fifth for Saturday’s Qualification Heat but could not reach those heights on Sunday. He enjoyed a sizzling battle with Jeremy Seewer in the first race on his way to ninth place but the second moto was ruined by an early crash with Dylan Ferrandis that meant he had to judge the track carefully to push up to fifteenth.

After eleven rounds Petrov is currently Yamaha’s second highest-placed athlete in MX2 as the youngster occupies 12th place. In 11th and two points ahead is Bike it Yamaha Cosworth’s Max Anstie. The Brit experienced mechanical bad luck on Saturday, which prompted a gate position almost last and on the outside. His fortunes did not improve in the first moto with a DNF but he recorded Yamaha’s best finish of the day with eighth position later in the afternoon. Anstie and his hard-working crew are set to continue development with an appearance at the fifth round of the British Championship next weekend. Kemea’s Luke Styke returned from a chest injury to finish sixteenth at Teutschenthal.

Grand Prix pauses for a week before another doubleheader takes place across the first two weekends of July. Trips north to Sweden and Finland lie in store for rounds twelve and thirteen on the MXGP slate.

Christophe Charlier: “I’m happy to be back! I have a good feeling with my knee and I had fun on the bike today. I am focussed on the next race and to get back into the top five. It was tough today with my position on the gate. Next time we have to work hard to make sure Saturday goes well because we need those good starts. I liked the track because of the hard-pack and I have many kilometres under my belt on similar circuits in Corsica and Italy.”

Petar Petrov: “Saturday was really good. I had my best qualifying so far and felt good on the bike. On Sunday they did a lot of work on the track and it was totally different. In the first moto I had a good start but was riding tight. I dropped from 5th to 11th and tried to fight back. We were having a battle from about fifth place to twelfth, it was a good race and in the end I managed to finish 9th. In the second moto I hit Ferrandis in the first corner and crashed. I tried to come back but as they had flattened the track it was hard to pass. If I didn’t crash a top ten was possible again, for sure, but it is what it is. I’m looking forward now to Sweden and I’ll keep working hard in between.”

Luke Styke: “After having been off the bike this was a good race. I was feeling good on the track and had no pain anymore. The first race went really good. I had a good start and was able to fight with the riders in front of me for quiet a while. I was happy to finish 13th in my first race coming back. In the second race I had an average start but I felt exhausted throughout. I couldn’t push anymore and finished 19th. I didn’t get a lot time on the bike coming into this race, so I kind of expected this. Overall this gives confidence for the next races so I’m looking forward to Sweden.”

Max Anstie: “There are some positive parts of this weekend and we made some decent steps. The bike was working really well this weekend until we had a few little problems. Today was tough because of our setback on Saturday we had to start to the outside of the gate. I did the best I could and coming through the pack those rocks were like machine guns. In the second moto I came from last to eighth and it was a decent way to end the weekend. We have to keep the ball rolling from that second moto into the next one. We’ll go to the British Championship next week for race time, which is what we need. Onwards and upwards and I know it doesn’t look great from the outside looking in but the team have worked so hard and we just need to keep plugging away.”