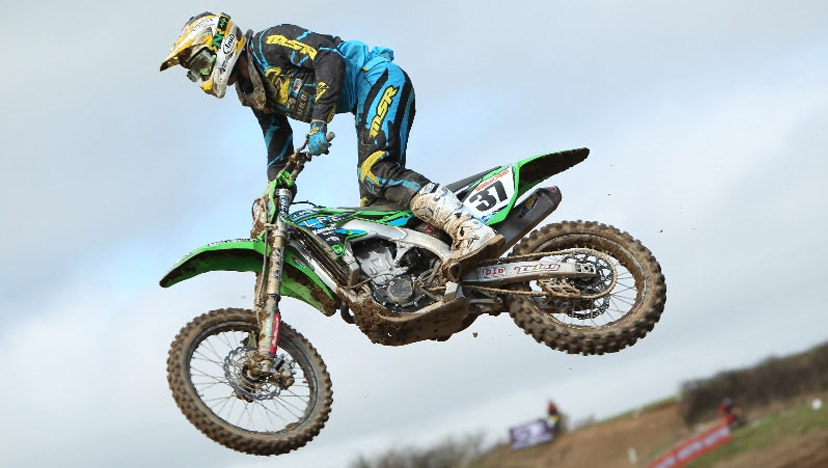 Challenging start to the season for Apico LPE Kawasaki Racing

For both riders it was going to a tough day as it was Erki Kahro’s first race back in the British Championship for a couple of seasons, while Gert Krestinov would be lining up in the ultra-competitive MX1 class.

Sunday morning started with the qualifying sessions for both MX1 and MX2, in the MX2 session Kahro struggled to find his rhythm on the track and managed to finish in 23rd fastest. In the MX1 class Krestinov was able to quickly set a number of fast laps to go 6th in Q1 progressing into Superpole. Once in Superpole Krestinov was able to improve his time by over a second and finish 7th fastest.

After the lunch break it was time for the first MX2 race of the season and as the gate dropped Kahro struggled to make the jump and was buried in the pack on the opening lap. During the race Kahro worked hard and made a number of moves to progress forward from 30th to 22nd at the finish and just outside the points.

The opening MX1 race of the season saw Krestinov miss the start and round the first corner deep in the pack and have to work really hard on the opening laps to get up to 11th place. Unfortunately with three laps remaining Krestinov suffered a heavy crash and remounted to finish 15th.

The second MX2 race saw Kahro make a much better start inside the top 15, from there he was able to push forward a couple of places before a crash dropped him back down a few positions. At the finish Kahro recovered to finish in 18th place and score some points.

After the nightmare of a first race Krestinov was looking for a much better start in the second race, but a malfunction with the clutch, caused Krestinov to round the first turn almost last and with a lot of work to do. As the laps ticked by, Krestinov was passing five riders a lap in the opening laps on a very tough circuit to pass. By mid race Krestinov was well inside the points and still moving forward to finish in 13th place.

With points in the bag from the previous race, Kahro produced another top 15 start and soon moved up into 12th place. Towards the end of the race Kahro made a couple of small mistakes and finished in a well earned 14th place to finish 19th overall on the day with 10 points.

Gert Krestinov – qualifying was ok considering that I’ve not been doing a lot of hard pack riding due to the weather, but I finished 7th fastest so was happy. The first race I got bumped by another rider in the first turn and then I had a heavy crash late on in the race, which I was lucky to get up from. Then in the second race we had some clutch issues and it messed up the start so I had to battle hard to get 13th. Then in the last race we overcome all the problems and I got a decent start and felt much better on the bike. I worked my way up from 15th to 6th place and that gave me 8th overall. It’s not the best start to the season but all things considered it could have been worse and now the next round should be much better.

Erki Kahro – Overall the weekend has been good, I started the weekend a little bit off the pace and struggled with nerves in qualifying. The first race I wasn’t happy with my riding and then in the next two races I felt much better. The second race would have been better if I hadn’t crash mid race, but then in the third race I got a 14th so that was really good and something to work on for the next event.

Steve James – Team Manager – this weekend has been eventful, it’s not been the best start but it’s not been the worst either. We have had a few problems today and in the first race Gert got boxed in off the start and had to come from the back, before crashing heavily and was lucky not to get injured he remounted to recover for 15th place. Then in the second race there was a problem with the clutch on the start and he was almost dead last and had to work hard to get up to 13th place. We fixed the problem for the last race and things were much better, Gert got a better start and pushed forward to finish 6th and run the same pace as the guys in 4th and 5th which is where we want to be. We can now refocus and prepare for the next round and look for better results there. In the MX2 class it was a bit of a learning day for Erki as he has been away from the British Championships for a couple of years and had to readjust to the shorter races. By the end of the day he finished 14thin the last race and had the speed for top 10 which is where we are aiming for. We can now go to Lyng for the next round looking for much better results in both classes.