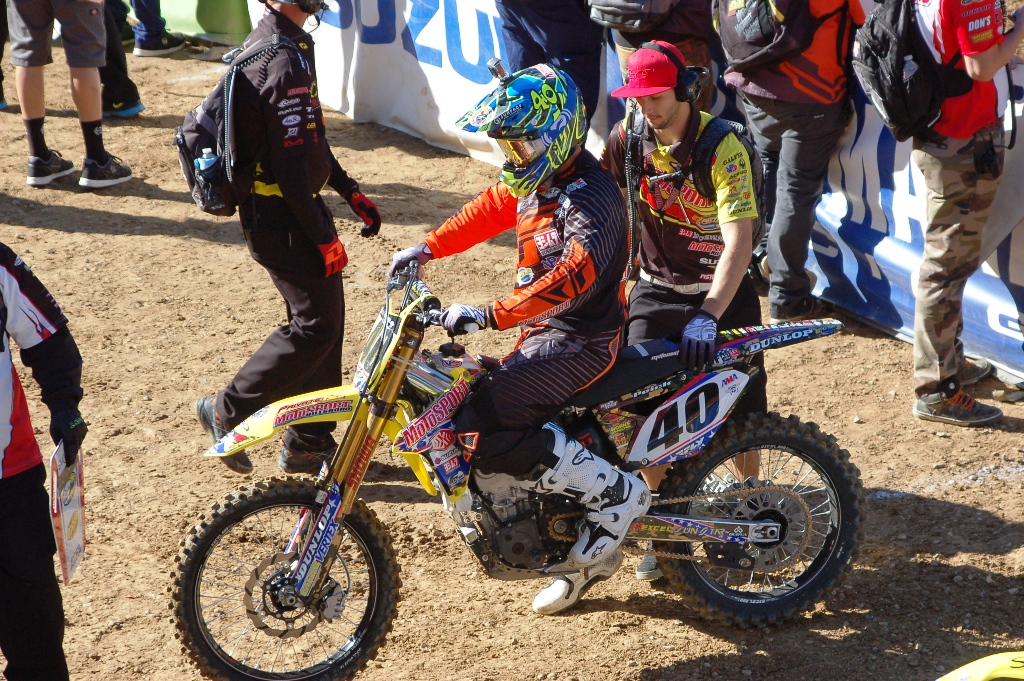 Catching up with: Weston Peick

The privateer Suzuki rider had a brilliant season last year but this year, despite no factory help, is doing even better!

Peick got his second fifth place in row on Saturday night but this time he did it coming from 15th and passed Tomac and Barcia to get there.

The small team around him were understandably pumped with his performance and for everyone on the team to beat the factory boys is a great achievement.  It is a great David and Goliath story even if Peick is built more like Goliath that David!

Peick spoke to us after the race to give us his take on his memorable night.

MX Vice: That was a tough night – you had to race every race!

Peick: Yeah definitely, first practice I took a digger and hurt my head a bit, I kind of did a front flip. But I rode like crap all through practice and suffered because I didn’t get the best of times.

I didn’t have good start to the main event, I think I started 15th and just put my head down and I think we had some solid lines out there tonight and we were just killing it.  Just rode solid and came from 15th to 5th and it was a good race.

MX Vice: You were battling with Barcia and Tomac at the end and passed them both.

Peick: Yea they had some weak spots out there that I saw I could capitalise on. I saw the opening and I took it.

MX Vice: What’s it like sitting in the LCQ knowing you were fifth last week, was it nerve wrecking?

Peick: It pisses me off. I hate being in the LCQ having to ride with people that don’t have place on the track, just don’t know how to ride. But other than that it was good, we got another top five and we just go from there.

MX Vice: You are back here in the privateer section of the pits, yet you are beating factory riders every week, what is the deal with you not being able to get a factory ride? You were good last year and this year you are even better.

Peick: Yeah definitely next year should be even better, we will just keep building off this and see how next year goes.

MX Vice: Is it frustrating when you are running with those factory guys?

Peick: I’m not too frustrated, my team and I build a solid bike and we bust our asses during the week. We put it to them, we do what we have to do with what we have and it’s really good.

MX Vice: Is this above you expectations this year or is this where you see yourself now?

Peick: We set our goals for top five, it’s not easy, it’s hard work but this is where we are at so it’s good.