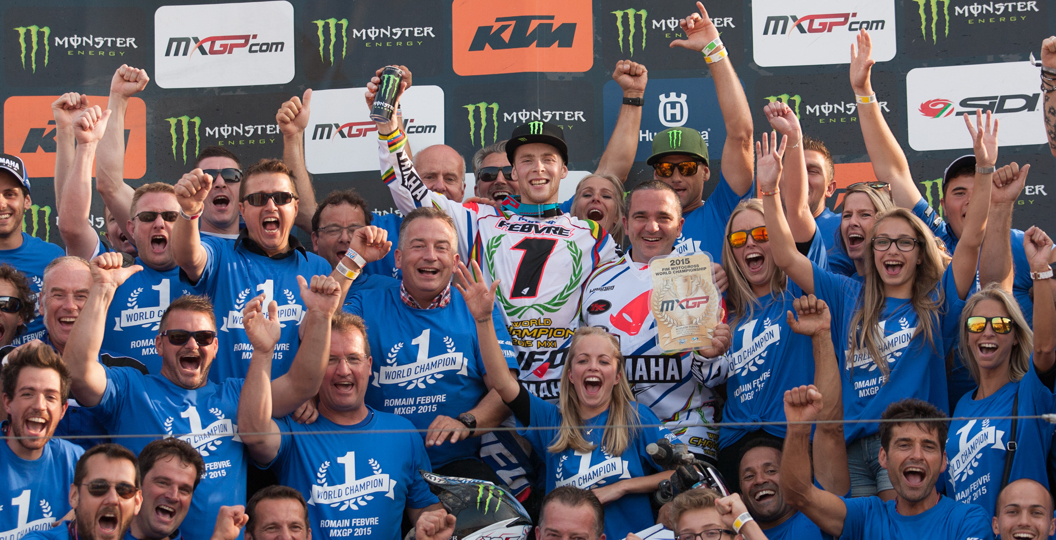 Catching Up with: Romain Febvre

Romain Febvre is perhaps the most unlikely champion in recent memory; most pundits were unsure whether the reserved Frenchman would be able to finish on the podium at all this year. Although it was unpredictable, Febvre was certainly the most deserving thanks to many dominant showings across the sixteen rounds run thus far.

The most recent fixture, Assen, was undoubtedly the most stressful for him with the pressure of locking up the title, a new high-profile sponsorship deal and being pulled from pillar to post as ‘the man’ in MXGP. That did not start to take its toll on him until the final two laps of the day, however, he admitted; “Until the last two laps I was not looking back, then after that it was really difficult to stay focussed.

“I was looking back and saw Coldenhoff and Simpson were behind me, so was counting the points a little bit. It was difficult to say though, as I saw nothing on the pit board. I crossed the finish line and everyone was happy, so I understood that it was done.”

Talking not too long after his triumph, the Frenchman was still quite nonchalant. Offering a brief recap of the race that eventually led to him lifting his maiden crown. “In the second race the start was a lot better and I just passed everyone to win the moto and the 2015 world championship.”

The relaxed approach would perhaps indicate that this is something Febvre expected, following the pre-season programme he undertook. He admitted that he felt calm, but couldn’t really pinpoint an exact reason; “I was always calm, I don’t know why, but with some confidence. Last year I didn’t have that. I didn’t do anything special this winter, but I felt comfortable on the bike. At the beginning of the season I wasn’t ready and got some good results, so knew with some more preparation we would be even better. It is strange, but until now I didn’t put any pressure on myself.”

He counteracted that by stating if someone had told him he would in this position, he “wouldn’t have believed it.” You would be hard pressed to find someone that would have, to be completely honest, hence why the Frenchman found it hard to find a factory-calibre ride pre-season. Yamaha were the only ones who stepped forward, but are now obviously reaping the rewards. The last time we saw a world champion in blue was when Cairoli lifted the crown in his rookie season (2009). David Philippaerts delivered a number one plate for the Rinaldi squad the year before that, also.

Despite some being quick to stick an asterisk on his title, due to the amount of injuries in the class, Febvre has proven to be superior and has beaten Gautier Paulin consistently. The week before Cairoli got injured, Romain ran him down and dominated moto two to win his maiden GP. It just so happens that his rise to fame intersected with the unfortunate streak of injuries. That is motocross, as the new champ quite rightly said; “It is the championship – it is like this. This is not the first year we have had many injuries, last year also with Desalle and Nagl. I have nothing to say [to the people who say this].”

This will be the talk heading into the 2016 season, as Febvre will get his chance to defeat the likes of Cairoli and Desalle straight up. It is a challenge he is seemingly looking forward to; “When you win a championship your confidence is on the top, and I’ll come back next year stronger. When you have the speed that you can win, you need to win, but on some weekends you’re not one hundred percent so need to take it easy. That is the most difficult part, to accept bad results sometimes.”

For now the focus will be firmly on the final two MXGP rounds, where Romain will be able to bask in his newfound fame. Then of course he has his Motocross of Nations debut to consider, where he’ll be hoping to make 2015 a truly unforgettable season.