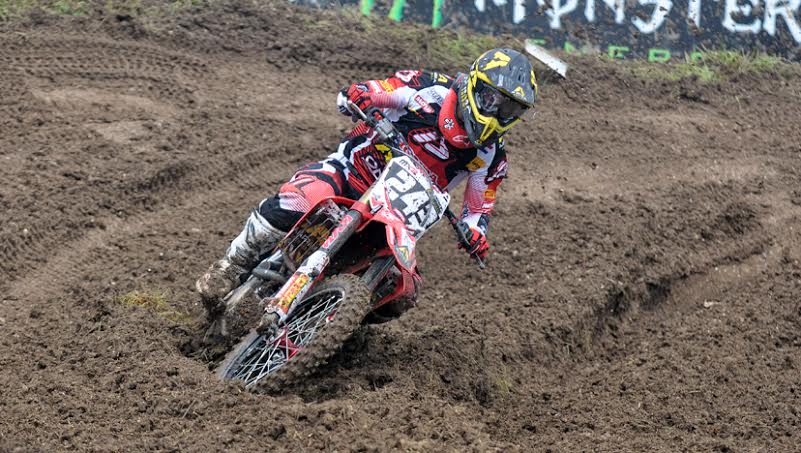 Catching up with: Tim Gajser

Talent combined with confidence can be a deadly weapon and young Tim Gajser is discovering just how good he really is in 2014.

The talented 17 year old Slovenian has a Kevin Windham-type smooth style and seems to float across the track with effortless momentum.

Coming from Slovenia, Gajser has not had an easy path to GP front runner and HRC factory rider. But showing his tenacity and sheer riding talent, Gajser has worked his way through the ranks and through the European divisions to become one of the best young potential talents in the world right now.

While Adam Cianciarulo and Cooper Webb have been highly touted amateur prospects from no age in America, as has Dylan Ferrandis in France, Gajser has had to come in quietly under the radar and only finished school last year – but he maybe has the most talent out of them all.

The next step for Gajser is to believe in his own talent 100% and his podium at the British GP might just help him do that. Tim is still the nice, friendly humble kid from next door who just happens to have an immense talent for riding a motocross bike.

But deep down he holds big ambition to be World Champion and if he continues to progress at the rate he has and believes in himself, there is no reason why this quiet kid from Slovenia can’t become the best rider in the world in MX2 in the next few years.

We caught up with a smiling Gajser as he came back from his first ever GP podium.

MX Vice: You are on the podium, but it was hard work in that second moto after getting held up with Ferrandis!

Tim Gajser: Yeah it was a tough second race. I didn’t have the perfect start, I was around tenth place but then I made many passes and got to fourth I think. Then in front of me Dylan made a mistake or the bike turned off or something like that, then I was caught behind him. Three riders passed me and again I had to do my best to get them back to finish third and get third overall.

MX Vice: You regrouped well after you lost those places, you didn’t seem lose your rhythm…

Tim Gajser: I knew I need to be in front of Tixier and have someone in between us. I knew I had to do my best for sure and in the end it was good!

MX Vice: You made a big step up from last season, even though you had a few good results, but did you expect to be consistently running top five this year?

Tim Gajser: In the beginning I was expecting top ten, to be always riding in the top ten but now every race is getting better. The Japanese guys are improving the new Honda. Things are getting better every week so I hope there are many podiums in front of me.

MX Vice: You were on KTM last year how did you adapt to the Honda and was it better than you expected?

MX Vice: Do you know what you are doing next  season? There will be a lot of teams after you with these results!

Yeah definitely, it is one of the smallest countries in Europe, there are just 2 million people so it is really hard to progress in the sport and come in the top of motocross. So it’s really unbelievable!

MX Vice: You are still really young so are you looking to be World champion in the next few years?