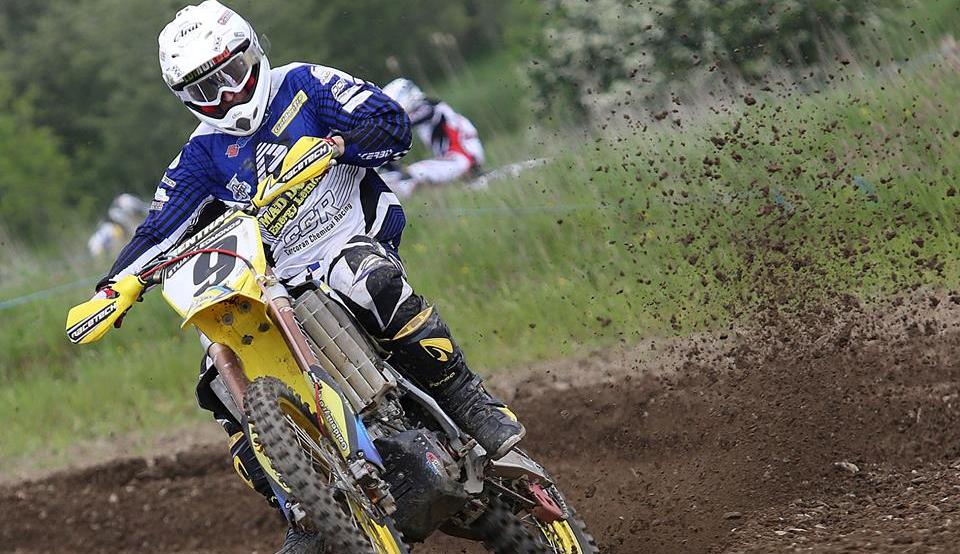 Catching up with: Stuart Edmonds

Stuart Edmonds won the third round of the Ulster motocross championship and the Billy Hutton Memorial tropghy last weekend but it was close run affair!

Wayne Garrett hounded Edmonds for most of moto one but the Mad Dog/CCR Suzuki rider minimised the mistakes to leave Garrett unable to find a way through. A bad start and a collision ruined any chance Edmonds had of winning race two as he came from the back of the field to fourth.

With Richard Bird and Wayne Garrett going 1-2 in that moto it meant the top three overall were separated by just two points going into the final and deciding moto. In short it was winner takes all!

But tt was Edmonds who quickly got into the lead after passing Robert Hamilton in the decisive moto and, despite a late race charge and a last corner dive for the win by Wayne Garrett, it was Edmonds who held on to take the moto win and the overall victory.

We caught up with a happy and champagne-soaked Edmonds to discuss his day and also his come from behind performances in the British championship at Canada Heights two weeks ago.

MX Vice: Two moto wins out of three but that second moto fourth meant it was all down to the third moto for the overall!

Stuart Edmonds: Yeah, I collided with someone off the start and I got hit on my funny bone! So I had a dead arm for a lap and it caused me to get passed by a couple of riders coming down the hills because I couldn’t hold on. Then I collided with another rider and went down because I couldn’t hold on. But once I got into it i pushed as hard as I got and got up to fourth. My dad said just relax because I could see Hammy in the distance but there was only a couple of laps to go. But that’s the way it goes, I had a good day, I was trying some new settings and went to have to some fun and that’s what I’ve done.

I’ve missed this (racing at home) with last weekend (winning all three at an irish champsion) and this weekend winning here, it’s good. It’s been a long time coming,I feel  a bit more like myself so I will just keep pushing on. At the start of the season I was probably expecting too much of myself ( coming back from the injury).

MX Vice: Wayne was really putting you under a lot of pressure in the first moto and right at the end of the last one, but you didn’t really make any mistakes.

Stuart Edmonds: Yeah, in the first moto we were running a bit soft in the back and I was just trying to play it safe, every bump I hit I was getting bounced back. But he was definitely keeping me honest! Then the last moto I wasn’t expecting him, I heard him with two laps to go and thought I would be ok but then he came up on top of me on the last lap and I made a couple of mistakes but i knew the last section was pretty tight and if he did try anything I could keep it tight. He tried going round the inside of me and I shut the door, he tried round the outside and I shut the door, so it was good racing and he definitely kept me on the ball!

MX Vice: Does it give you confidence going into the British championship to come home and get wins and have some good close racing in the process too.

Stuart Edmonds: Definitely, it’s been a long time since I won a race, it was maybe in an Irish championship last year. It is giving me confidence but I am overworking the team, my dad is even chipping in! We are all pretty stressed trying to get things right, they have all worked overtime the last few weeks trying to get things right and we are getting to where we want to be.

MX Vice: Just on the last round at Canada Heights, you were riding well, but you seemed to be coming from the back in every single race!

Stuart Edmonds: Aw it was terrible! I made alterations to gearing and I just wasn’t getting out of the gate. I was riding mega on the track but I just couldn’t  figure out what I was doing. I think I was actually starting in the wrong gear so it’s just one of those things! I got an okay start in the first one but I got caught up in a few things and fell off.

The second one I got caught up in a pile up with Nez Parker – he had a bit of a whiskey throttle moment! So that put us back to last but I was able to come through the pack well, some people question my fitness and i was questioning it as well but to do that in 28 degrees and keep pushing forward, it was very good. But you just can’t keep coming from the back in the British, it’s just mad, you hit 20th place and everyone is within a second up to the top ten!