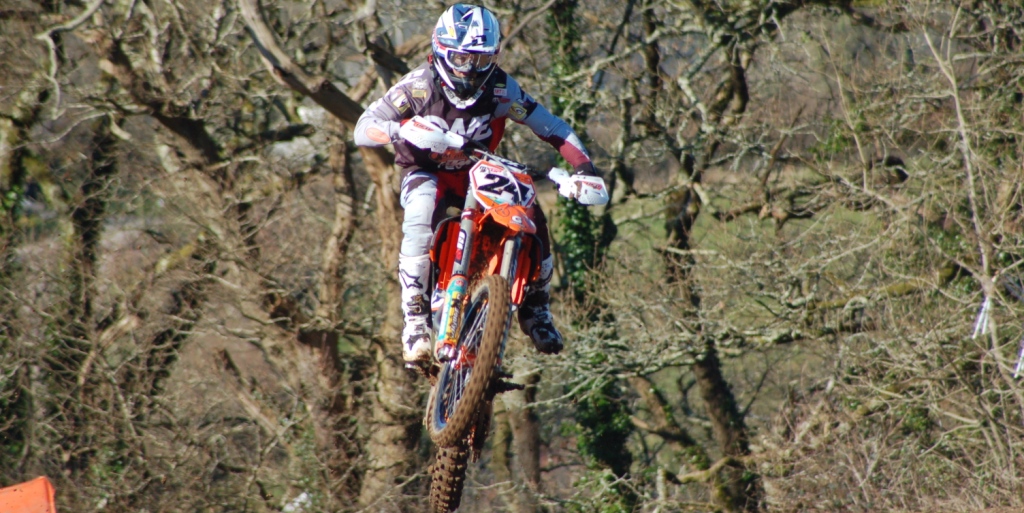 Catching up with: Shaun Simpson

Ever since his win in Lierop at the final MX1 GP, Shaun Simpson has been on a high.

But now, after re-joining the HM Plant KTM team for 2014, it seems all the pieces of the puzzle are finally back in place for the friendly but determined Scotsman.

Simpson is clearly very relaxed and comfortable both on and off the bike this year. It has been a long time since Shaun has been this happy in his team surroundings and his on track performances prove he is back to his best. They say a happy rider is a fast rider and Shaun Simpson is pretty happy right now.

His GP speed has been very impressive and at Landrake Simpson won 2 out of 3 motos after battling with a very fast Jake Nicholls and Kristian Whatley. It was Simpson though who won the overall and took home the red plate – something he doesn’t want to relinquish for the rest of the year.

We caught up with Shaun at the end of the day for a quick chat about his victory at Landrake, being back with Roger Magee and his speed in the World Championship.

Shaun Simpson: Yeah it’s been ok, shame about the first one.

MX Vice: What happened in the first one? I think people where surprised you weren’t closing the gap to the leaders?

Shaun Simpson: All credit to Jake and Kristian they are riding good. You seen in the last one I can’t pull away so their pace is good. It was all down to the start today and I got them in the second and third one. We did go for a different set up in the second one, so I am little but disappointed we didn’t make them changes in the first race otherwise I think I might have been able to make it three out of three.

But no I have had a good day. It’s been stressful actually trying to keep the pace up lap after lap.

MX Vice: It’s different to what you are used to in the GPs…

Shaun Simpson: Yeah the short format takes a bit of getting used to. It’s quite hard to keep the pace up, come in, get cleaned up then go back out, three starts – it’s keeping the consistency up as well because a lot can happen in three motos. That’s three starts and three first corners to get through. But we managed to stay out of trouble so I look forward to the next one and trying to keep the red plate.

MX Vice: You didn’t seem to make any big mistakes all day – you were riding solid with consistent laps.

Shaun Simpson: We don’t like big mistakes! That’s something I try to avoid, I try and pride myself on being quite a smooth rider and not riding above my limits. That’s the name of the game every time I go out on track, I got solid laps in from the start and showed that my pace is there and my fitness is definitely there.

I am looking for another ten or fifteen minutes – the races are way too short! I would rather do three thirty minute motos than three twenty. But it’s been a good day also for the team to have the red plate in each class. You can’t beat that.

MX Vice: Talking about the team you are back with KTM and Roger Magee. Everything seems to have went flawless, you seem happy and confident and speed wise at the GPs it couldn’t have went any better.

Shaun Simpson: Yeah it feels like home. We are given the tools to do the job and sort of left to our own devices which is what I wanted for a long time. There is nobody telling me what to do, when to do it, I make my own program together with my trainer and we have got things dialled in. I am enjoying riding again, I am enjoying coming to the races and that makes a huge difference on track as well if you are feeling confident.

It’s just nice to be back somewhere where people believe in me and we work together to get the right results rather than fighting against the team the whole time. That’s seems to be what I have been doing for the last few years which is disappointing.

MX Vice: And that conflict is probably in your head even when you are going to the line?

Shaun Simpson: Yeah it definitely is. It’s never nice to be fighting the team or asking for an improvement to the bike that you feel will improve your results and it’s hard work to get it – it seems wrong.

MX Vice: That holeshot in Thailand must have felt great, it seems you feel you are back to the level you were a again in 2008.

Shaun Simpson: The starts are back where they need to be and I got another two holeshots today which shows the bike is up there with the speed and the engine is good. We still have a few things to work on but I do feel like my speed in good in the GPs too.

Top six is really where I feel I am at there and hopefully keep the red plate in the British. To be British champion and top six in the world would be good but as I said it’s a long year so there is plenty that can happen and I just have to stay out of trouble.