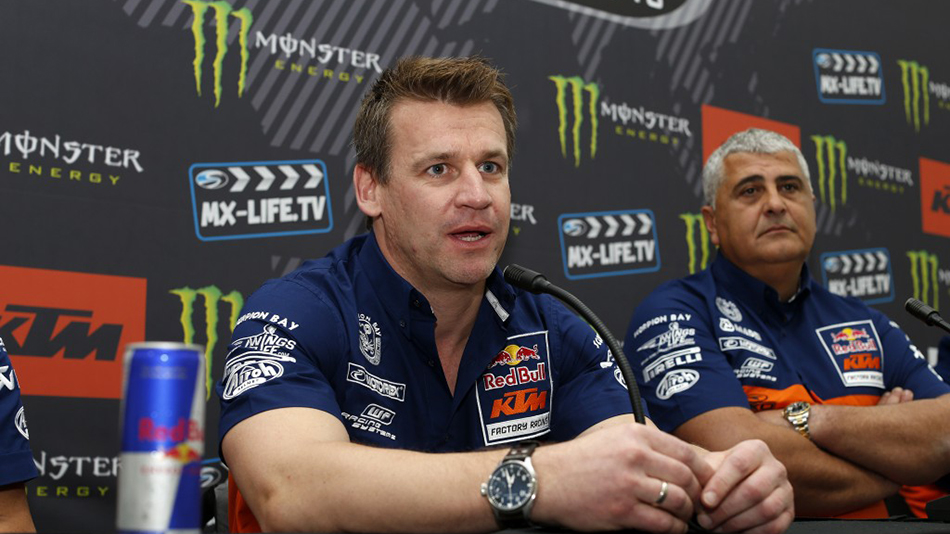 Catching Up with: Pit Beirer

Pit Beirer is certainly one of the busiest people in the MXGP paddock, as the head of Motorsport at KTM oversees many different things, as you would expect. This also gives him a unique outlook, and his opinions certainly make a lot of sense, hence why we chose to catch up with Pit following the opening two rounds of the FIM Motocross World Championship. So read on to find out what he thinks about his riders, the fuel situation in Thailand, and much, much more.

MX Vice: What does a typical week consist of for you, now that the season has started?

Beirer: My job has changed a lot over the years! I started working at the track, but in the meantime I am responsible for one-hundred and eighty people linked to KTM Factory Racing – sometimes I cannot believe it! There is a lot of office work to do, but first of all I have to present all needs for Motorsport to the board of directors, and if I get the green light, we go racing!

If I come to the race, it is more to enjoy the racing and stay in close contact with all of our team members and the riders. Back in Austria, I have to make the right steps for the future. When the season starts, I have the best people out there with the best riders, they don’t need me there, but I’m already working on the next season. The nicest part of my office work is I can still sit down with ‘my’ riders to work on a new contract with them.

MX Vice: What are your thoughts on the Qatari and Thai MXGP rounds? Does it make sense for KTM to travel to these locations?

Beirer: Yes it does, we are an international brand with a very global market. So, for us as a manufacturer, it is important to present our products all around the world. Don’t get me wrong, I know all of the difficulties involved for all the teams to race overseas, which is mainly a cost problem. But, you asked me as KTM, and as a manufacturer it is a clear yes, without a doubt. We had two GP’s with really good organisation, and talking to my team, everybody enjoyed the trip.

But, as the manufacturers benefit much more than the race teams from overseas GP’s, we must sit together with the promoter and the other brands to find a way that all strong teams can afford the costs for these races.

MX Vice: It seemed like everyone struggled with their fuel in Thailand, except for KTM and Husqvarna. What was the reason for this? Why could KTM cope with the change better than the other teams?

Beirer: I think the problem was related to the heat in general, and the fuel started to boil on top of the hot engines. Our engineers found a great balance between performance and engine heat, which means we don’t run our engines on their maximum power level in these conditions, as it keeps them very healthy and cool. It looks like this idea paid off for us!

The fuel that we used in Thailand was very similar to the race fuel we use in Europe, so our bikes did not react strange at all. I really don’t understand why other bikes had these dramatic problems; all teams got the spec sheet for the fuel before the race, and nobody had any doubts looking at the data.

MX Vice: Are you happy that Herlings is still in the MX2 class? I know Stefan Everts has openly stated that he wanted Jeffrey to ride the MXGP class this year.

Beirer: First of all, we listen to our riders, and if a rider that is eighteen years old tells me he wants to stay  on a 250f instead of a stronger MXGP bike, I will respect this wish for safety reasons. Imagine if I pushed a rider onto a big bike against his wish, and he had an accident!

Jeffrey works harder than anybody else in that class, he trains in rain, snow, storms, and also sunshine. The results he has are just a payback for the work he puts in. Why should we tell him he is not allowed to enjoy many, many wins in the MX2 category when he is just eighteen years-old? We would be penalising him for his hard work. He worked so hard for this, and he deserves every single win in this class.

MX Vice: We all know that Herlings is the best rider in MX2. How do you keep him focused, when he goes to the races knowing that he will probably win?

Beirer: To be honest, I am not with him enough to help him on the race track. The kid is very focused and he has the same stresses as any other rider. He is not super easy and relaxed before the race, because he thinks that we have already won before the start. He knows that everybody wants to beat him, and the first races have shown that the guys are closer to him than last season. His own will to win will keep him motivated.

MX Vice: You are surely happy with how Cairoli and Herlings have ridden at the first two rounds. What are your thoughts on how Jordi Tixier has performed so far?

Beirer: Yes, Tony and Jeffrey did a great job. Jordi needs to bring it up to the next level. What I mentioned before, about the competition from the top five guys being stronger than last year, Jordi can feel that too. But, as long as he trains hard and he gives it one-hundred-percent, I am happy. I cannot expect this or that result from my boys – I just expect them to give one-hundred percent every single day. Jordi is doing that, so over the season I’m sure that he will stay in the hunt for the top three.

MX Vice: How involved are you with the two Husqvarna factory teams on race day, and in the week, in comparison to your work with KTM?

Beirer: I was involved one-hundred-percent to build the first racing structure for the brand. MX, Enduro, US, Moto3 everything is on it’s way. But, from now, we will try to split the organization between the two brands to give them both their own identity. One of my best friends and former KTM Manager Robert Jonas is now leading the Motorsport operation for Husqvarna, so you can imagine what our goal is.

We want to make both brands strong in racing, but with friendship between KTM and Husqvarna members. For next season I will give my thoughts but Robert is fully in charge.

Q: Did you expect Ken Roczen to come out in his rookie 450 season and consistently beat Ryan Dungey? Do you know if this has made for a tense atmosphere in the truck in the USA?

Beirer: I was at Las Vegas last October and saw him ride the 450, and I was sure we would see him fighting with the top guys from the beginning. His win at A1 was of course a bit more than we all expected, but the situation in the team is still very good. Roger is a great leader that keeps everybody happy on his way; Ryan and Ken are both really cool people. So, you will not see the big fight that everyone is waiting for in our tent.

MX Vice: The switch that Dean Ferris made to KTM was one of the biggest talking points in the off-season, how did all of that come around?

Beirer: It’s a bit complicated, but let me try to explain it as short as possible. When Dean asked for a test day he told us that he is free of contract; we still had a spot free, so we invited him to test our bike. In the meantime, Steve Dixon informed us that this was not the case and that he still has a contract. We immediately told Dean that we are not interested anymore, but in that time he has also lost the trust from his former team, and they also did not want him back.

So, for one moment he was without any ride at all. He created all this mess to live his dream and ride for a top team in America, and we decided not to let him down like this. I spoke to Steve and explained to him that we will give him the ride, if there will be no friction left at all between KTM, Yamaha and Steve’s team. The rest is history!

MX Vice: When do you expect Ken de Dycker to be back in action? I understand his injury was worse than originally expected?

Beirer: He had a really bad hand injury with different fractures – we are confident that he can be back for Arco [di Trento].

MX Vice: Finally, what is next for KTM? You are challenging for championships all over the world, so where do you go from here?

Beirer: I go from here straight to the airport to follow the Moto 3 test down in Jerez tomorrow [laughs].

MX Vice: Thanks for your time, Pit!