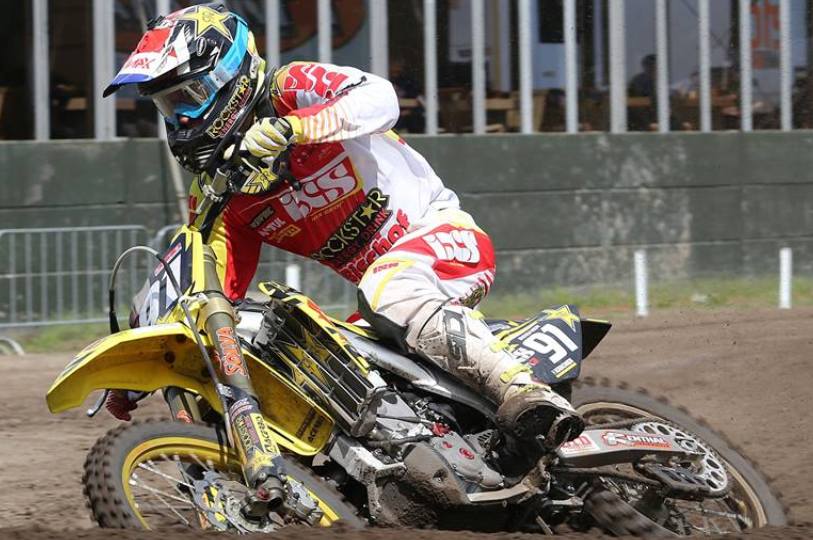 Catching up with: Jeremy Seewer

Jeremy Seewer has showed flashes of brilliance this season in his first full year of GP racing. The young Swiss rider was second in the European Championship last year and has raised his game this season in the factory Rockstar Suzuki team.

Seewer surprisingly still isn’t a full time professional rider as he is still finishing off an apprenticeship, wisely covering his bases should motocross not work out. So expect Seewer to get even better once he can dedicate all of his time to motocross!

Andrew McKinstry caught up with Seewer at the British GP to discuss his season so far.

MX Vice: Last year you did the European championship, were you happy with how the season went?

Jeremy Seewer: Yeah, it was my second year in the European championship and my goal was really to make podiums and maybe even the championship but then I finished second. I had a good year, Valentin Guillod, my countryman, was really strong too so we had a good fight and stuff like this and my riding was good most of the time. I feel I improved and learned a lot getting ready to do the GP’s this year and I think it was a good year for me.

MX Vice: You rode some MX2 GP’s last year, do you think the class has improved this year or is it pretty much the same level?

Jeremy Seewer: I think this year it is more riders at the same level, last year maybe the top five riders where really good and this year we have ten, twelve or even thirteen riders which can finish in the top three or top five so we have a lot riders with the same level this year.

MX Vice: At the fourth round in Italy you lead the GP; that must have felt pretty awesome!

Jeremy Seewer: Yeah that was great, first time leading an MX2 GP race. Yeah my riding there was great, I got a good start and everything was just perfect, I was in front of Herlings and then he passed me. I did two or three laps behind him so it was really amazing for me.

MX Vice: There has been much debate about the 250 Suzuki in previous years, has the bike improved this year?

Jeremy Seewer: Yeah we changed a lot in the team and also for me the bike is working not a lot better because also last year the bike was good, for the Europeans it was just perfect for me.  But this year for the GP’s to compare to other teams and other bikes this step we made was really important and I think we have a good bike and we can challenge with it.

MX Vice: Not many people know but you aren’t even a full time professional motocross rider yet as you are doing an apprenticeship, can you tell me a bit about that?

Jeremy Seewer: Yeah, I am still making school and work like you said, an apprenticeship. I finish this in the next three weeks and then I will be a full pro. Like this until now I still go working and school every Wednesday, I learn and still have exams and stuff like that so I am pretty busy at the moment with everything but when I go full pro for three weeks or one month I believe I can make another step as I will finally be a pro.

MX Vice: Have you got a deal with Suzuki for next year to race MX2 again or are you still talking about it?

Jeremy Seewer: At the moment we are still talking about it, for now we just have a contract for one year but yeah we are just talking for the moment so we will see what happens.

MX Vice: What is the plan for you long team, do you want to go MXGP in the future or make the move to America?

Jeremy Seewer: Until now I am really not sure because I have been really busy and I have had no time to think about it with school and everything but I will be pro soon so I will get to think about it, for sure some things are going to change. I am going to think about my future, I would like to sign a contract to ride in MX2 GP’s for three years; the age limit is 23 so I have three more years left and this is my plan. Right now, my plan is to improve in the MX2 class this year step by step and getting on the podium.

MX Vice: It is a pretty good year for Switzerland this year as Arnaud Tonus and Valentin Guillod are also having good seasons in MX2, You must be looking forward to the nations?

Jeremy Seewer: Yeah that is really good, we have three really good riders that are in MX2, we have made some top five results with three Swiss guys so it is really amazing and as for the nations I think we have a pretty good team to do well.

MX Vice: Thanks for your time Jeremy and good luck for the rest of the season!