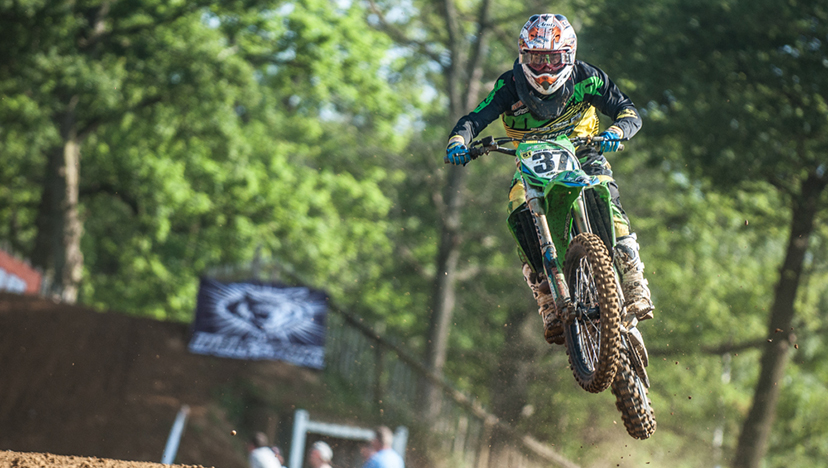 Catching Up with: Gert Krestinov

Gert Krestinov has had a relatively good start to the season, as he currently sits sixth in the Maxxis British Championship standings. In the final moto at Canada Heights this past weekend, he claimed his first moto podium finish of the year too, so he certainly seems to be moving forward. I would argue that he has been a little better than his results indicate, as the speed is there, evidently. We caught up with Gert following the final moto on Sunday, to discuss his season, among others things.

MX Vice: Gert, it was a pretty mixed day for you, as the results were not what you would have expected in the first two motos, but you were in contention for the win in the final race.

Gert Krestinov: The first two races were pretty bad, as I crashed in the first turn two races in a row. I had to do a lot of work to come through the pack. The first race was okay, there was some other accidents as well, so I came back to eighth, from last. The second race was even worse, I had to do more work to come to tenth – I used so much energy. In the final race I finally got a good start in second, and I was following Shaun; the pace wasn’t that fast, so I could stay with him. But, in the end I just got so tired, and Whatley found another gear and passed me. I settled for third, and I was happy with that.

Do you feel like if you had got a good start in the first two motos, you would have been up front battling for the lead, like in the last race?

I don’t want to say that, but I would have been closer to the top five, that is for sure. I just made it harder for myself, because I used so much energy in the first two races.

Although a lot of people look at you as a sand specialist, you are starting to prove that you are competitive on all surfaces. How did you find the track today?

I’ve always been pretty good here. I like the sand, it is easier for me to go fast, but I also like the hard-pack. I’m not just a sand guy. I’ve been in the UK for a lot of time now, so I’m familiar with all of the tracks, which is quite good.

Have you gelled with the Apico LPE Kawasaki team? Are you all happy with how the season has gone?

The team has been behind me the whole time. I have done a lot of work, and they have been backing me, which I’m thankful for.

What are your goals in this series? Are you exceeding them, or are you right where you thought you would be?

Of course, there are always what ifs. I’ve had some bad races, you know, with some bad starts. But, I have had some good races as well, I’ve shown that I do have the speed. If everything goes my way, then I can be up there.

With your GP background, do you feel like you are one of the riders that could do better if there were two shorter races?

At some tracks, definitely. Like today, if there had not been two races, I would have done quite bad. It’s hard to say, some tracks I would prefer two thirty-minute motos, but then at places like this, it is okay.