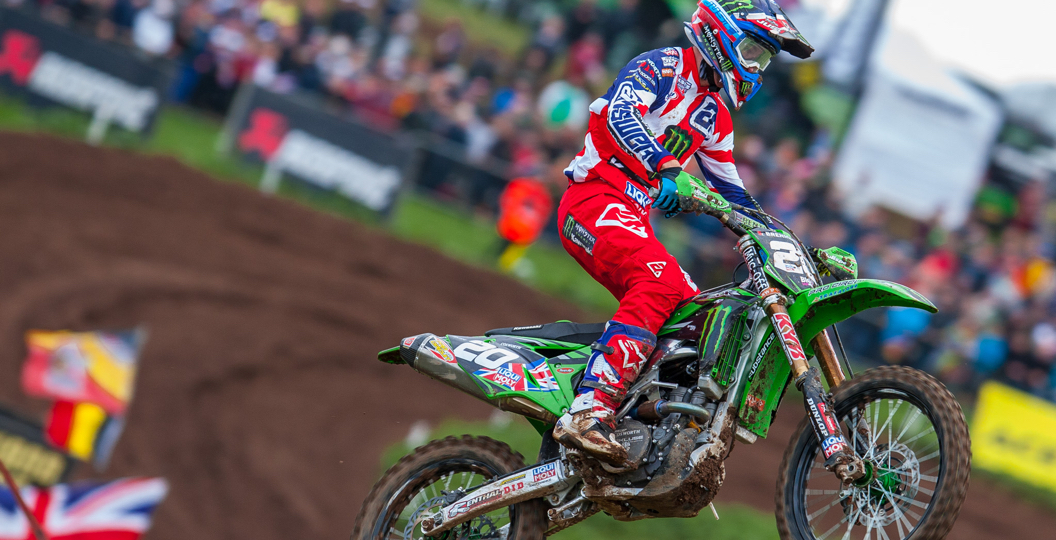 The Motocross of Nations was far from easy for Tommy Searle. However, in the end he achieved his goal of standing on the podium with Team Great Britain. There were some issues along the way, hence why the team had to drop his score from the first moto, but the fifteenth that he acquired in the second moto proved to be valuable.

MX Vice: Obviously a bit of a rough day for you. You were kind of just coming from the back each time as you would expect to on a 250F, but in the end you got on the podium. I think this is your ninth try at it, so I guess you’re stoked?

Tommy Searle: Yeah, very happy with the team performance and to be on the podium when I was up there with the British crowd. I think it was great for motocross in our country and just everyone to cheer for with the weather and how the race was. I think we owe a lot of that obviously to Max. He was unbelievable with what he did today. It hasn’t quite sunk in for him yet. He said up on the podium, he was like, “How did I do it?” I don’t even think he knows. He’s just riding amazingly at the moment along with Dean [Wilson]. He put in solid results, which is exactly what we needed from him.

Me, I had a problem in the first race so all the pressure was on for the second one. Mark [Chamberlain] said, “Look, we just need one solid result.” A top fifteen. Obviously if I’d have got a start I feel like I could have run in the top five or top ten, no problem, on a 250F even. But it’s hard on a 250F. You’ve got to start and I didn’t get a great drop. I think I was thirty-first on the first lap and I managed to come through to fifteenth. I kept charging. I didn’t do anything amazing on the bike, but I just kept going and going. I needed to race without any mistakes and just get some points for the team.

It seemed like your starts went wrong immediately out of the gate, even when you were lined up against other 250s. You were just getting swallowed up immediately. Any particular reason for that?

No, I don’t know really. I didn’t feel like I got too bad of jumps. I just sort of hung off it. I just got really sucked down in some of the mud spots, so I don’t know if I was just in a softer spot. I was way, way behind. Just halfway up the start straight I was already getting filled in. Everything was so heavy in those conditions. It’s just a difficult race. It was almost survival and then you found your rhythm halfway through and it went a little bit better from there. Survival weekend really for me. Just happy for the team and happy that we managed to get on the podium.

What was the issue in the first race? I guess there was no chance of you continuing?

No, I don’t know really. It happened so early on that it seems weird. It was obviously the clutch that went. I could barely get up the jump in the end. It seems strange why it went so, so early on in a race. Normally if you wanted to burn a clutch out in two laps you’d struggle, even if you were trying to. I managed to do that. So, not really sure what the problem is there. It seems strange. I actually felt really good in that race. I was charging through and I got another bad start, but was already up behind Cairoli. I was going for it. That was sort of a game-changer on my weekend.

Yesterday was quite just slow and a bit sluggish on the bike. Not racing it like a 250F. I used my legs because I was worried about my ankle. We taped it up and that gave me a little bit more confidence I needed for the second race.

I don’t know. It’s hard to say that. It was a lot different. Obviously, Steve has a three-speed gear box. I think in these conditions we could have just done with doing a little bit more testing before the race. We did what we could. We just had to ride what I had at the end of the day. It’s just what it was. We made the best of it, but it didn’t go that great this weekend. I know that. I know it wasn’t like the ‘Nations in the past when I’ve been the top guy for Great Britain many, many times that I’ve done it. This weekend it was different, but we got on the podium and that’s the main thing.

We’ve spoken about keyboard warriors and haters a lot this year. Now that you actually got to the event, did you have any of that or was it business as usual? Once everyone is stood in front of you, they want to be your biggest fan?

No, I’m sure I’m still going to get a lot of hate online. I don’t know why. People seem to do that in Great Britain. All the fans here were really great. Unbelievable having them all supporting us. A really big thank you for them, all the kids and the adults. I think they’ve been so supportive and they all get behind us on the day, which I knew they always would. I had no doubt about that. So, really big thank you to them coming out and braving the weather and getting behind us all weekend.

Obviously your first ‘Nations was here in 2006 and that was massive. Did this weekend meet your expectations? Did you expect a bigger crowd or more energy? Was it kind of in line with what you thought it would be?

I think the weather put a dampener on it a little bit. It was just a stressful one for me. Normally I really enjoy the Motocross of Nations race, but this year it was hard to enjoy it. I’ve had a little injury in my ankle and I was worried about that. Worried about a lot of things. Kurt came, my trainer, before the race this morning and he settled me down a lot and got me in the zone. Thank you to him for that. I felt ready by the time the races came. I don’t know. It’s sort of hard to enjoy this weekend with the little injury I’ve been carrying and stuff. I just wanted so badly to do well and not let anyone down. Luckily I didn’t do a too bad job. I got fifteenth, which is the result we needed. Max and Dean pulled through.