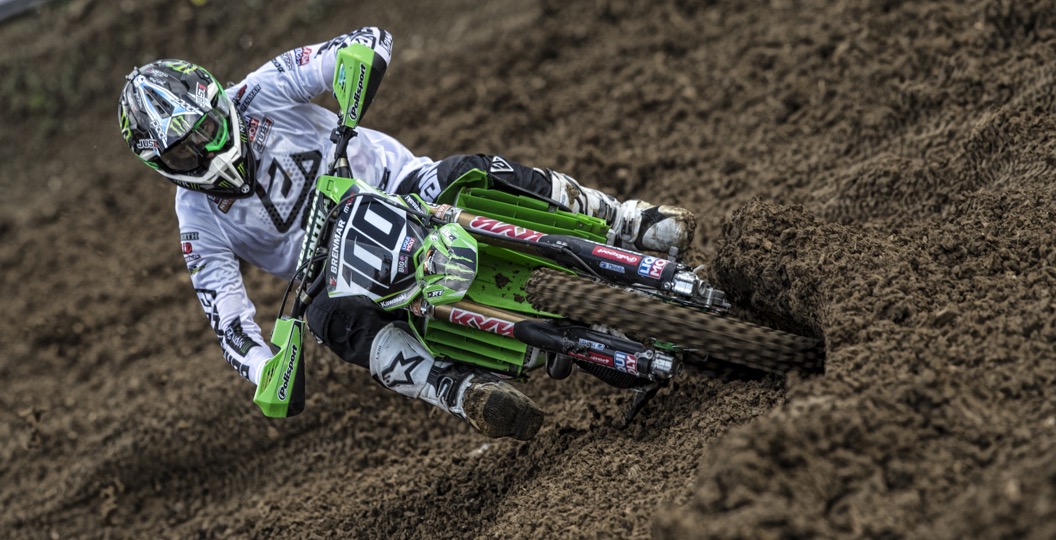 Why was Tommy Searle not racing at the MXGP of Pays de Montbeliard? That question was asked countless times across the weekend, but there is nothing to worry about. The Monster Energy DRT Kawasaki rider confirmed that in our exclusive interview from the event, which acted as the final round of the FIM Motocross World Championship, and also discussed his plans for next year.

MX Vice: Obviously, we are doing this interview between motos, which is proof that the weekend has not gone how you planned. But, from what I understand, everything is good and there is no need to worry?

Tommy Searle: No, no need to worry. I got hit in the first or second corner last week in Assen and my ankle just swelled up a lot. It is not like a ligament injury or a bone, but just like an impact. There was a lot of swelling. I did not ride this past week and then was just going to come to race. In the warm up and timed qualifying it was alright. A little bit of pain, but it is nothing to worry about.

Then when the conditions changed and the rain came, there are ruts and stuff and the boots are heavy and you have to use your legs a lot more with paddling through the ruts and stuff. It is just too much of a risk for me to ride in those conditions with my ankle how it is. I don’t want to set it back. I want to have next weekend and be able to ride from Tuesday on the 250F. Obviously my priority is the ‘Nations now, so I did not want to do anything that could jeopardize my preparation for that.

After Assen and the hours after you crashed, were there any worries that you’d broken it? Did it feel like something more serious?

Yeah, really worried, especially at the time when it happened. I got hit so hard that I thought it was broken. I couldn’t put weight on it. I knew myself it was bad, but then after I’ve had so many injuries in the past that I know when something is broken and when it is not serious. I said, I don’t think it is broken. It is just swollen. Then I’ve had physio every day this week and they say the same.

It is just like a contusion there. It is swelling from an impact injury, so that is good news. It is just a bit sh*t I’m not out there today, but it is just in these conditions for me it is not worth risking it when I’ve got one of the biggest races of my life coming up in the next couple of weeks. I’d rather miss today and then start preparing Tuesday for that race.

I guess that’s kind of the nice thing about the situation you’re in. You’re a good pick for the ‘Nations. You can make these calls, whereas the other guys have to go out there and risk it all and potentially do some more harm before ‘Nations.

Yeah, somewhat, but not really. I feel like sh*t for not racing, do you know what I mean? It’s my job to race. Thought we’d make the choice, but with Steve and the team they said, “Look, you have got to do what is right for you and right for the future.” It just was not worth me risking it to be out there today.

I guess you wanted to be in front of teams and the industry as well, because you obviously have not got anything locked up for next year yet.

No. It is done with this team. I’m going to stay with Steve Dixon and Kawasaki, which I’m really happy about. But now my focus is on the Motocross of Nations in two weeks and then it will be… Obviously the season’s not gone to plan this year. Even in this short amount of time I’ve been on the track, mentally this year has been really tough. It is probably one of the worst in my career, so I’ll be glad to see the back of it. But hopefully at the ‘Nations I can turn that around and we can get Team GB to end the year on a high.

So, same deal next year? 450 alongside Darian [Sanayei] and the British Championship, I guess?

Yeah. It will be 450 and the British Championship. I like racing in Britain. I think it is good. I like the tracks. It is good for me to go and get some wins there and confidence up. I just enjoy doing those races, so that’s in the contract as well.

Finally, how has the prep been going on the 250F? I guess you rode it a bit when you missed America?

Yes, I rode it. Then I rode it a couple of times. Steve’s bike is really good. I enjoy it. It is three gears, so quite different to the 250F I last rode, but it is good. I’m really looking forward to getting a few more weeks on it these next two weeks and then hopefully I can feel good for ‘Nations.

Does it feel like going home when you get on a 250F? Obviously, we know that was where you had your best years. We even saw at Latvia that you can jump on it and be right up there. So, do you get on it and immediately have a smile on your face?

Yeah, I did that. When I rode that the other day, I did. They brought it out to my track and it just felt good. I just enjoy riding it. It is just different. It is not that I do not enjoy riding the 450F, because sometimes I really do, but that bike is more fun. I just seem to get along well with it. I find it, I don’t know if I would say easier, but it is just easier when I’m at a race. In a race situation I think I can just push a lot harder and just make it happen on that bike, where a 450F everything seems to come together and it has not really been doing that the last couple of years.

Fun equals results, which is why everything should go well at the Motocross of Nations and hopefully you’ll be on the box.

That is the plan. Obviously, last couple of weeks a lot of other countries and teams have been changing with injuries and stuff. But, like we say every year, we always have a good chance for Team GB. We’ve got a lot of good riders. The list we always put out, there is always potential to beat us. It is just what happens on the day. I hope with Dean [Wilson] and Max [Anstie], I think they are both riding at their best. I think with me on a 250F I can do the job we need to get done. I really, really hope we can do it. I think it is going to be an amazing race. It will be unforgettable if we can get on the podium.