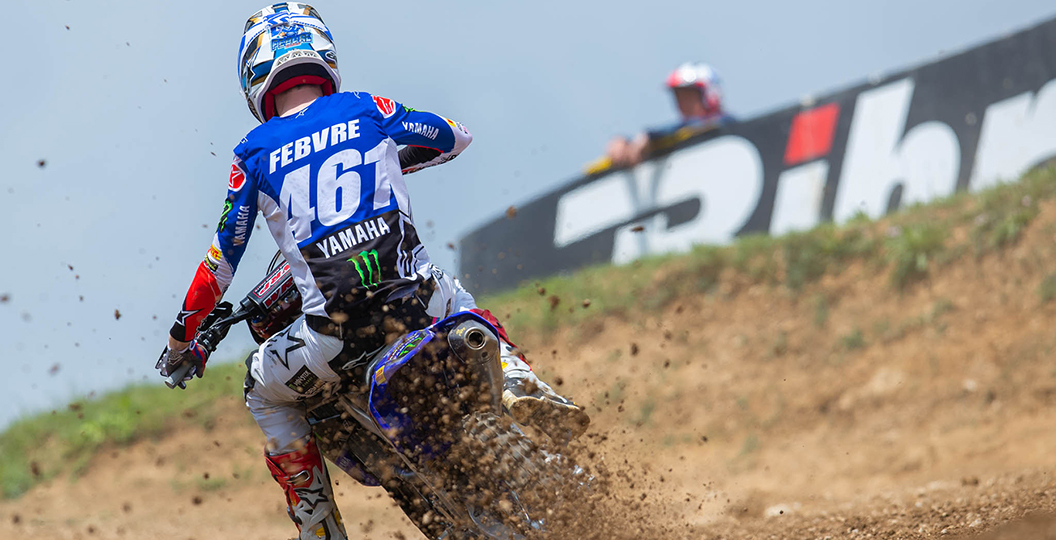 Romain Febvre only returned to racing a little over a week ago, yet he has already proven that he will contend for wins in the very near future. The Grand Prix of France was very positive, as he led laps and stood on the box in front of 38,000 passionate fans, but is he surprised that he is making such rapid progress? Lewis Phillips caught up with the former world champion on Sunday evening to discuss everything that happened.

MX Vice: Obviously this is just your second race back, so we should not have really expected much, but from one week to now it seems like you have made a massive step up and proven that once you are back to one hundred percent you are going to be right in the fight for wins.

Romain Febvre: Yeah. This is the goal. The season started pretty good. We still enjoy it. It has been a hard time and a long time. I think it is not finished. I was better. I think my speed is pretty good, because since Portugal for one lap I can do a really good speed. I know the races are a little bit more difficult but, overall, I am really happy. Ending up on the podium is a little bit the cherry on the cake.

I had a really good second moto. I had the holeshot and it was much easier on this track. I led a lot of the time and I said, “Maybe I’ll have something to do at the end?” Tim [Gajser] passed me… He was faster. I tried to follow him for one lap but made a few mistakes and he went a little bit away. Overall, I’m happy. Fifth and a second… It is pretty good. For sure with more training then I should be able to battle for the win.

The first moto was interesting, because you were pushing hard for the first half. I then saw your times start to drop and I was thinking, “Okay. Obviously, he has only just come back from injury and he will start to tail off a little bit.” You picked it back up though! Did you just get a second wind? How did that all work out?

I had a good start and then I was behind Arnaud Tonus and following his lines. I was even sometimes close to make an attack on him. I was close, then I think in the fourth or fifth lap I got a big stone on my goggles. It opened my eyes on the top and then I started to have some blood inside my goggles. I slowed down, because… I could see, but not perfect.

I slowed down a little bit and then I started to think, “Oh sh*t. Maybe I will not be able to finish the race,” because of the blood, and then I started to make some mistakes and got really bad arm pump. I just slowed down in the middle of the race, to get back the rhythm and also the flow. I did not have the flow. Once I realized who was in front of me, [Clement] Desalle and [Jeremy] Seewer, and I was not going faster, I was feeling really bad and that I could go faster.

I decided to try a little bit of everything and then I came back out on them. Clement made a mistake, so it allowed us to pass. I was close to my teammate for fourth but did not make it happen. For the second moto I said, “If I want to finish on the podium then we need to do something a little bit special.” That is what I did in the second moto.

Seeing that intensity at the front of the pack for the first time since your injury, were you surprised at how it has progressed since Argentina? Did you look at it and go, “Okay, once I am back to one hundred percent, I can do this quite easily?”

Honestly, I don’t know. I expected a little bit the guys to go faster in that period that I was injured, for sure. Like I said in Portugal, I was only on the bike for eight days and then decided at the last moment to go there. Just to not come back here on the home soil, because it is a little bit more difficult, so I went there and then already the Saturday I had really good speed. Sunday as well. Like I said, I knew that the race would be a little bit more difficult.

I was surprised that the guys didn’t… I was not, let’s say, surprised at myself going fast, but I was more surprised that they were not going faster than me sometimes. For sure it helps and then you think I didn’t know so much, so it will come back soon. I was also sick this week. I could not ride between Portugal and this weekend, so that made it a little bit more difficult. We are thinking if I have a little bit more riding and more hours on the bike then I should be able to battle for the win, for sure.

You mentioned something there that I wanted to ask you. Obviously, the French MXGP is amazing. You love it. The fans are incredible. When you come here and are not one hundred percent, like now, is it difficult in a way and you almost don’t want it to happen? Fans are great, but sometimes they do not understand exactly what is going on. Is it hard to manage? I am sure you have had fans come up to you this weekend and go, “1-1. It is going to happen.” You are almost like, “No, you do not understand.”

For sure. The fans are great. That is for sure. Sometimes they think everything is possible and for sure I am realistic. I do not want to overthink or something like this. Like you said, many guys came to me and said, “Podium this weekend.” I was like, “It is going to be difficult,” because they do not know everything. I was sick. My foot still hurts sometimes. Many things. I was not expecting anything myself, just to progress and to be on the bike playing with the other guys. It is what I did. For sure the fans, to ride on home soil like this and lead the race, it was really special. I hope to be able to win next time we come here.

How close to one hundred percent would you say you are at the moment and how long do you think it will be before you are back to your Argentina form?

It is difficult to say. I think already with the two weeks that we are going to have now I can be close. Now I don’t know. I cannot say, but maybe if I don’t get arm pump then I might be eighty percent or something. I always care about putting my legs [down]. This weekend was much better, but in Portugal every right corner I was careful to put my foot on the ground and not twist it. I was really riding defensive. This weekend was less but, like I said, I have not had many hours on the bike. I need to be a little bit stronger, mentally and physically. I think with two more weeks I think I would be close in Russia.