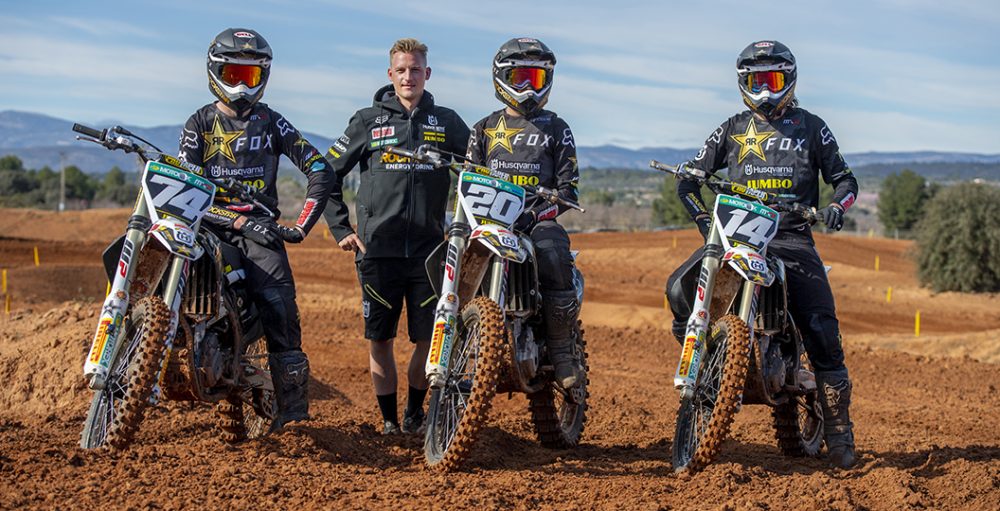 The Rockstar Energy Husqvarna Factory Racing MX2 team is one of the most exciting in the paddock, with rising stars like Kay de Wolf and Maxime Grau. The experienced hand of Jed Beaton, who is entering his final year in MX2, adds a lot of strength to that line-up as well. It is highly likely that the team will make a splash when racing begins in Russia in less than a month, so this seemed like an ideal time to find out how the off-season has gone for the trio. Rasmus Jorgensen, the team manager, talked us through everything that has happened and what to expect.

MX Vice: It has been the longest off-season in history, but how has it gone for you and your three guys? Wrap the last couple of months up for us.

Rasmus Jorgensen: Yeah, obviously it has been really long. It feels like forever ago that we were in Trentino, but when you look back then the time has gone fast. It is always like that though. There was a changing of roles a little bit, with Thomas [Olsen] moving up to MXGP and Kay [de Wolf] moving into MX2. There are not too many new faces in the team. The atmosphere in the team has been really good, like last year, and the transition onto the factory bike has been nothing but positive for Kay. Not only do I think that he has made a good step riding wise, but also mentally.

With Jed, I believe that he too has improved in certain areas compared to last year. It has been positive. Our new guy, Maxime [Grau], has been a good addition to the team as well. It is always good to have a young guy in the EMX class, so we can try to get him ready for MX2 whenever he will be ready. It is not a must that he has to be ready for 2022. It is always quite interesting to guide these young guys into the MX2 class, just to see them grow. When we get them that young it is almost like watching them become a man. It is like what we have done with Kay.

With someone like Kay, who goes from EMX250 to MX2 in the same team, what changes? There was no full-factory bike in EMX250, so that is a big change. I guess there is a lot more to test as well. What about his off the bike programme?

Yeah, like you said, there are a lot more options with the bike. You can personalise the bike a little more. We do not want to spoil the EMX riders too much, because if you give them all of the good material straight away then there would not be anything to add or anywhere to progress. We always try to bring our riders to the best level possible in our team, no matter what class they are in. We need to adapt with younger guys and whatnot obviously, with what level they are on and what they can handle. The intensity for Kay has gone up, but he is still super young and just 16. The training is more, I would say, professional and there is more intensity. I think that for him it was his mentality towards training that changed a lot and that was on himself. It is obviously a big step, but the things that we have done with him seem to have worked. We are just working off of that.

You could have signed another MX2 rider and left Kay in EMX250 for another year. I guess that you could see that he was ready for this though, so why not bump him up?

Yeah, exactly. You do not want to move them up too soon and burn them out. When you have a promising talent like Kay, with a good family behind him who will back him up fully, then you know the ingredients are there. It was a good time to make this step. I think that it is very important to come into the first year in MX2 as an underdog too, so that you can enjoy that moment. No matter how much we try to prepare him for the challenge this year, mentally, you have to go out and experience it for yourself. You need to experience the travelling, the heat in Indonesia, the intensity in the motos and all of these things. You need to experience that to realise how tough it is, and the only way to do that is by doing it. I think this was the right decision.

Kay was impressive in Sweden at the weekend too. Was that not much of a surprise for you? It was a rough weekend for Jed, on the other hand, but it was only a warm-up race, so moving on…

We knew that Kay made a big step. I was surprised to see how well he controlled the races from the front and passed the guys for the lead, plus that he stayed calm. There were still a few mistakes and crashes, which took away the overall on both days, but it does not really matter. It is all a learning process, and this was just a pre-season race. The same with Jed. We do these races to feel where we are with the bike – to see how the changes that we have done perform when the gates drop and the pressure is on – and the physical conditioning. It is usually a bit of a different feeling compared to training. A race like that is just to confirm everything and make sure that the steps we made were the right ones. The guys seem to be very happy with their bikes and are feeling good, so we are looking forward to Russia.

What was it that you wanted Jed to improve on in the wintertime? What things were outlined towards the end of last season?

It is difficult when you have a guy who is battling for podiums. When Jed would get a good start, he would be right up there. Starts, for sure, as those are always super important and then consistency. Jed had a super good year and achieved the goals that he set – we wanted to have a healthy season, be on the podium a lot and be in the top five in the standings. He was in the battle for third the whole way as well. When you get to that level, it is the small details that make a big difference. We have worked on that. I feel like Jed is in a good mental place; he knows that he can do it now and is ready for the challenge. It is his last season in the class, so it is going to be a very interesting year. We will see what happens. The competition is tough, but I feel like we have done our homework. Jed is in a good place, happy and calm.

Do you notice that this being his final year in MX2 changes him in either a positive or negative way? Is he different? It could make him more focussed or he could put more pressure on himself. Do you see that it impacts the way that he does things?

I would say that it does impact it a little bit. The MXGP class is so stacked, so you always want to get results that make you deserve a good ride. On the other hand, however, you cannot really force the issue. If you are too set on that then you are going to lose your focus. Jed is in a good mental place right now, like I said, and he is quite realistic about it. If he performs and deserves a ride then he will get one, but if not then it is a different situation. It is not easy. They are 23, so when they do not have deal then it is not an easy situation. We will see.

It looks like we are going racing in Russia. What are your thoughts on the schedule? Russia is not the easiest place to start, then there are a lot of races in a row.

I think the calendar is good. Russia is not the easiest place to start, in terms of organisation. We are starting so late now and I would prefer this calendar over doing triple headers again. I know that a lot of people enjoy the one-day format, but I also feel like it is nice to have the Saturday as a warm up when we are travelling that much. It is what it is. We just need to make the best out of the situation right now and the calendar is good. It is going to be intense for the guys, but it is the same for everybody.

It is tough to talk about expectations, but is it realistic to sit here and say that Jed is going for a world title? Is the focus more on getting a medal then, hey, maybe that ends up being gold?

I think that realistically you have to take one race at a time. I think the same applies to anyone who finished in the top five the year prior. You have to focus on yourself and take one race at a time to see where you are towards the end. To talk about wanting to be world champion too much, when you have not done it before, is a bit dangerous. There are so many races and so much can happen. You have to take one gate drop at a time and minimise the mistakes, then see where you are. Our goal is to win. That has always been the goal – the same goes for Jed himself. He got a taste of winning in Mantova and definitely wants more. We just have to keep our heads down and keep working. I feel like we are in a good place.