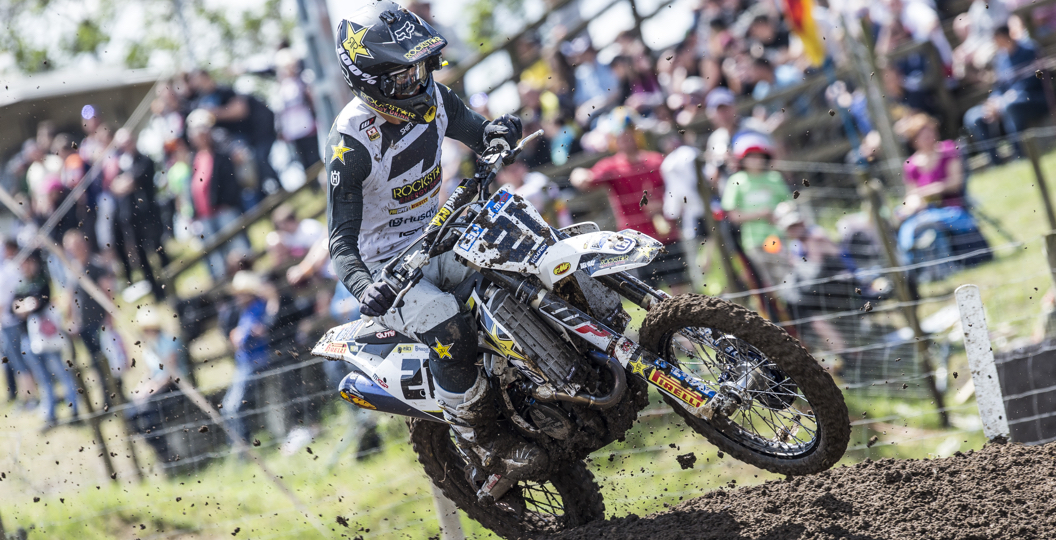 A really good race for you today, both races. You looked in really good form. Do you feel good at the moment?

Yes, I am in good form. I felt good. I worked hard and it paid off. I’m going to work hard during the week to have a good weekend. Today was a good day, of course. Third overall this weekend, but it could have been better. In the first moto I had a good start, but in the first corner I think I got hit by someone in my rear-wheel or something. I lost traction and then after the first few turns I was like ninth, but then come back. I did three really solid laps, but then the guys up front were really gone. It was tough. There were so many lines where I could see where I have to improve myself.

It wasn’t easy and I wasn’t super happy about my riding, because I couldn’t walk away from the guys from the pack. Yesterday was solid, then in the second moto I did a good start again. [I made] a mistake in the first corner and I didn’t holeshot. I was in the lead in the first corner, then I didn’t get out of the corner so good. I stayed with Cairoli for momentum, then he started step-by-step to walk away. I wasn’t happy about that. He continued working to that point, then when Jeffrey passed me I made a mistake. I thought they are coming from the inside.

I saw him a little bit from the side and I thought it was a mistake. I went straight and I was a bit disappointed about this, then I get loose again with good lines and came back on him really strong on the last four laps. With a lapper in-between I couldn’t do the timing I had on a few spots, where I was doubling that hole before the pits and stuff. For two laps I couldn’t make it. It’s really close and this is where I was earning a half second and I had a chance to pass, so it was really close and I couldn’t make it. Still, I don’t stop charging.

It was interesting the way that you rolled Jeffrey [Herlings] back in in the second race. You were coming down into the pit lane and kind of launching across the rollers into the corner. Was it each lap that you were finding new lines or smoother lines?

Each lap. Actually, first moto I was really tight. I never watch back. I do my stuff, but I could hear bikes behind me so I was like, here I’m really struggling. Then I feel that I’m struggling. I was always changing lines and stuff. It didn’t pay off, but in the second moto it paid off. I changed lines and I found a better reason. I could earn a bit of time anywhere, then it paid off because I went back on Jeffrey.

Then after the pits I was crossing lines, which is tough because when you stop crossing lines they are hard-pack with bumps. It can be like you go right, left and over the bars. You need to cross the line and then keep it straight, good reason and keep that throttle open. Then I made it and it paid off. I was very open minded. I was finding new lines and it was good. I didn’t pass, but still I tried and there was a little position that I could do it. This is the position I want to be in the future. I don’t want to be that close defending my position. I want to be attacking.

In the second part of the race, it wasn’t a case of everybody else going slower. You just seemed to get faster. You were putting in your best laps right at the end of the race. Is that down to training?

Yes, this is down to training. I’ve had some solid weeks. When I’m racing it’s tough to find tracks like racing. The more you race, the better it is. Now always that bike I feel really good and I start finding myself again all the right spots. I would like to be a better rider and better racer. I am really fast on training, but there are many good guys on training. There are not so many good racers. Mentally I’m there. Physically I’m there. Just sometimes I could be better. This is what I’m working for and it’s good that I find all points to work on, because third is not a win.

Yes, because it’s a fine line. You are on that fine line and you get out really quickly. It’s really long to get in and now what I will do. I’m that type of guy; I understand each step and it works out good. I understand better my bike. I set up better my bike, because I made many mistakes in Latvia. I’m not happy about that and not proud, but I’m there. Now this was a tough track.

I kind of like every track. Sand, mud, whatever. But, here especially, I know it’s a tough track, because for many, many, many years you can see that someone who has never been winning a GP comes here and they win everything. Watch on the story of Teutschenthal. I know when I come here that it is a strange GP and I need to do it well for myself and I did, so it was okay.