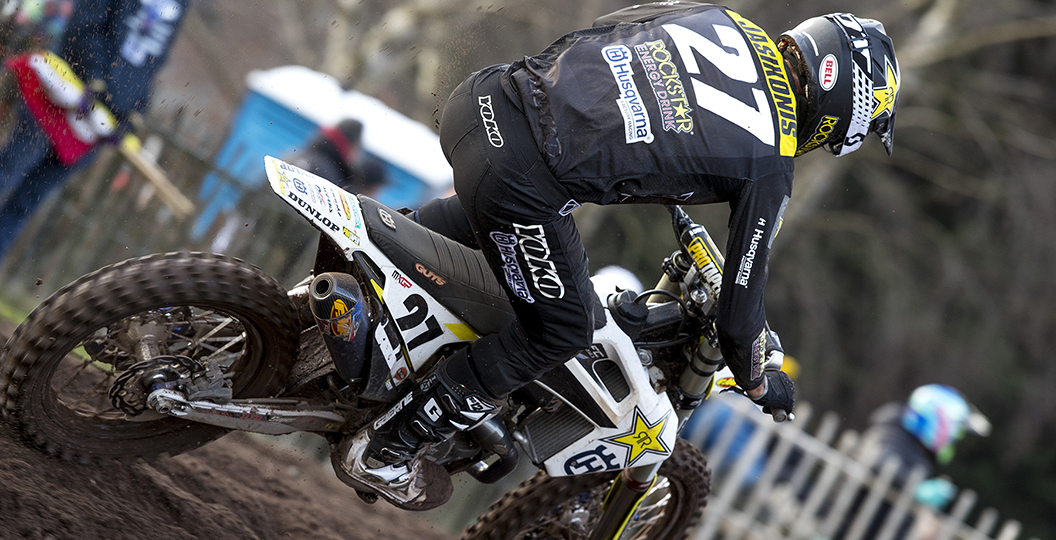 Arminas Jasikonis has arguably had the most eventful month of all the Grand Prix contenders. There have been crashes, flashes of speed, minor injuries and other hurdles. The 2019 Hawkstone International was a positive experience though, even though there was one hiccup when he collided with Tommy Searle in the air. What actually happened there? Jasikonis explains his side of the story in this exclusive MX Vice interview.

MX Vice: Good day, I thought. Speed was there. Qualifying was good. Obviously there were things that stopped you from getting the results that you wanted but, as far as preparing for MXGP goes, I feel this was a positive experience.

Arminas Jasikonis: Yeah, I would say it was the first race that was a little bit more positive because the first two I had the crashes. Also today timed practice was quite good. I didn’t hit the perfect lap, but it was still okay to be first. First moto I went through the pack and everything was going well and then [I had] that crash with Tommy [Searle]. I don’t know really whose fault that was. For sure everyone is stand for himself, but I’m happy that I didn’t injure myself.

I just hit my leg, but that was okay. It’s going to be sore for a couple days and then it’s finished. Then second moto I said to myself, “I have to take it more easy.” I was a little bit riding too slow, to be honest, but at least I finished without any crashes and also in the Superfinal I took it easy. I could have went through the pack also, but I think I should start taking it a little bit easy and then build it step-by-step, because we need some proper motors.

Can you just talk about that crash with Tommy [Searle] a little more? Obviously, there are no TV cameras here. No one is going to see it. I heard you collided in the air. It sounds gnarly. What happened?

Yeah. Basically I was taking outside line, which no one was taking. That’s what I like, hitting some outside lines. Then after the turn, it was just a jump like table and then from inside it was always pushing a little bit out. But we jumped and I thought maybe we will not touch, because I tried to jump on the right, but he was just quite wide open and jumped into me. Then suddenly just before landing we already touched. We had quite a gnarly crash, but I’m happy that he and me are okay. That’s most important and we could keep going afterwards.

Was he ahead of you when you took off then? Were you hoping to make a pass on that jump and kind of pinch him off heading into the next corner?

I was going there for the pass. It was already decided that I’m going to do that. We touched front with front and rear with rear. We were really even. That’s how it happened, but it was already my plan to get it there. That lap… He a little bit jumped too much on the right.

You mentioned you have got a sore leg, which is nothing. I feel like you have had a lot of sore legs lately though. After every Italian Championship round when I go online it’s like, “Yup. AJ’s got a sore leg.” Is it the same leg? Is this becoming a problem?

It will not become a problem. I’m building myself like a real man, because that gnarly start crash where the guy rode over me it was the same leg as now of course. It’s not too bad. Also Mantova I hit neck and shoulder, so it’s not easy to go on the track every time. You have to get warm and everything. It’s quite painful, but still I’m happy that I can race.

Is that kind of the one thing you want to still work on before Argentina? Maybe slow down to go faster and just keep it on two wheels?

Well, I know that my preparation went good… Really good. I’m strong physically and everything. It’s just like I’m a little bit struggling with the arm pump in the motos. Already today by every moto it went a little bit better, so it was good. It’s just an international race at the moment, but still you always want to show some of what you got there. At the moment we couldn’t show that, but we build it up and then we come into MXGP and make some good stuff.

Obviously, you have got a full off-season in with this team now. Compared to Assomotor last year, I’m guessing this is just mind-blowing and amazing? Everything that you want, you have got?

Yeah, of course. It was always my dream team. I have everything what I need. I have my trainer. I have great mechanics. Everything just works great. It just all depends from me how hard I work. The rest, everything is there. Whatever you need, it is there.

Is there one particular thing on the bike that you still want to fix before the first GP? Is there something that you know you need to go away and work on in testing?

To be honest, I want to fix that me and bike would work together and not crash. That’s the only thing. I’m happy with the bike. I’m really happy. It’s just about making it work for myself, getting good rhythm on the track and finding good lines and everything. The bike works just great. We have been testing and we know it works.

Argentina and the whole MXGP season, what do you expect from yourself? Obviously, you have had a podium before, so I guess you just want to get back up there at some point?

Sure, I want to get in the top. That’s our thing. To say that I’m going to go every time on the podium, no. It’s hard work. I need some experience and everything. I know I can be there and the team also trusts me. That’s why I’m here and everything. So, of course, I want to do good. Maybe Argentina it will be just a building step. We’ll see. I expect for myself to be there.