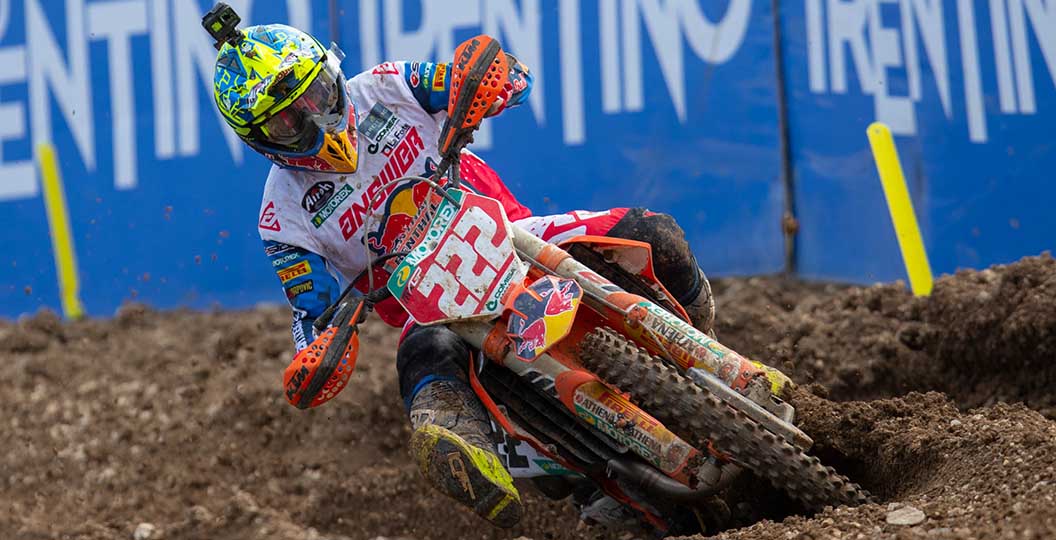 Antonio Cairoli had a difficult time of it at the seventh round of the 2019 FIM Motocross World Championship, the Grand Prix of France, but kind enough to give us some time and recap the gap in the form of an exclusive MX Vice interview. Technical issues meant the first twenty seconds of this interview did not record, but all of the juicy stuff is still below. Enjoy!

MX Vice: It was obviously not the weekend you wanted, even though everything looked like it was going to be okay after the first moto. That second moto cost you dearly, after some mistakes, so just sum it up.

Antonio Cairoli: [Ed. Note: The first half of this answer, where moto one was discussed, was not recorded due to technical issues.] I was a little bit not really feeling one hundred percent, so I was a little bit struggling. In the second moto, again we were really careful with choosing the gate because we have some problems with this gate all the time. Some gates drop, some gates don’t drop. I didn’t calculate so good, so I take one gate that didn’t really drop like the other ones. I start when everybody else starts next to me, then I just got tangled in the gate and started last.

I came back quickly to a good spot, eleventh or twelfth, then again crashed trying to pass some riders and then get again ran over by [Ivo] Monticelli, and then started out of top twenty again so tried to make some passes. [I made] another mistake trying to pass, then stalled the bike and it didn’t start immediately. Back to twenty-first and then we ended in seventeenth. For sure, it was a struggle and I tried to forget the second moto and build another comeback for the next race. We should be fully motivated.

Obviously you came through the field in qualifying and then in moto two again today. What was easier based on track conditions? Obviously, yesterday was really hard.

Actually yesterday was easier, because I was not banged up. After the first crash in the second moto [Ivo] Monticelli got the bike over me and I had some problem with my ankle already, then I was a little bit banged up. My clutch lever was completely bent. I couldn’t really get a good feeling with the clutch, so I was struggling on those ruts and had not so much speed. Everybody was trying to fight for their life on this hard spot. Of course, I’m really not happy about my riding. I should be a little bit better, but this is racing and of course we will try to regroup.

More often than not, you are first or second. That is pretty much your whole career. After a day like yesterday, were you really frustrated or are you quite level-headed when it comes to that stuff?

For sure I’m frustrated, because I know on this track you need to get a good start and you need to have the choice of the gate. That is very important here, because we already know that this gate is not really dropping as a normal gate should be. With the fourteenth place I didn’t really have the best chance to choose a good gate. I tried to count good, but it wasn’t good enough. The second moto I chose a bad gate and didn’t really drop on the perfect spot, so it was the consequence of a bad result of yesterday.

Were you chasing bike set-up all through yesterday? Were there a lot of changes or not really?

Yeah, there was some set-up of the bike changes. We found some problem on this track that is not really common, as we don’t really have a lot of time to find this track. [It was] hard and slick, especially yesterday, so we tried to make some changes, but it’s not always good when you change during the weekend. You don’t really know where you are. It was not the best choice. After the second moto I went back to another setting, which was my setting that I use all the time. The luck was not there. I had to come from the back and crashed, so we don’t really know exactly what happened. We try to be focused for the next one.

Maybe you’ll call me crazy, but I actually think there are quite a few positives you can take from this weekend. Do you see it the same way or are you just like, “I need to forget it?”

I don’t know, actually. Positive is okay, because I’m not hurt bad and on this track it’s so hard and slick you can be hurt coming out of this weekend. Since I’m okay with no injuries, it’s okay. We can try to regroup for the next race.