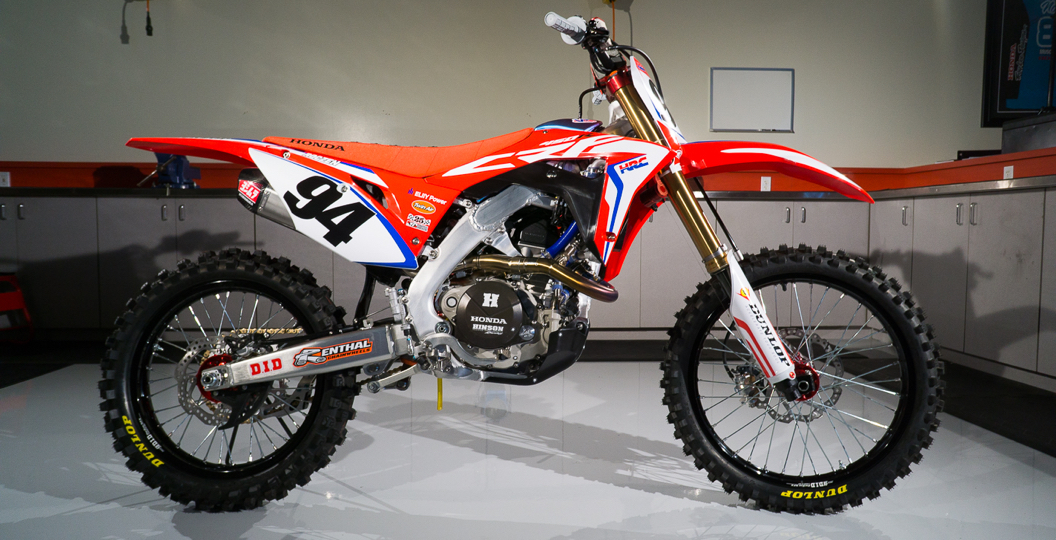 Although October is a fairly uneventful month for motocross fans, various intriguing talking points tend to arise on the first of the month. That, of course, is when a handful of riders and teams make their plans for the following season public, as a majority of contracts tend to expire at the end of September and current racing season.

Fans have been sat on the edge of their seats for days now, however, as official announcements have filtered through at a slow pace and left everyone wanting more. Rather than attract fanfare, some have simply opted to unveil their new deals through a discrete social media posts so, with that in mind, here is a brief overview of all that has gone on in the last month that you may have missed.

One would think that it is safe to assume that everyone is aware that Jeremy Martin is now a Geico Honda rider. The announcement regarding this deal was hurried along in order to ensure that he could line up at the MXGP finale, Glen Helen, and familiarize himself with his new surroundings in a race environment. Martin will race a 250F in 2017, before jumping up to the 450F in the final year of his contract.

Rockstar Energy Husqvarna Factory Racing are making very little changes to their 250F programme next year, but they did announce at the start of September that Thomas Kjer Olsen will be joining the European squad. He’ll sit alongside Thomas Covington and Conrad Mewse for the full season, which makes them one of the more inexperienced teams in the paddock.

Perhaps the biggest surprise in this piece; Arminas Jasikonis was signed up by Suzuki World MXGP to be their second full-time rider in 2017. A fill-in guy through the latter part of this season, Jasikonis has appeared in the top ten a couple of times in the sand but not proven to be a contender on the hard-pack. That is, of course, where Stefan Everts believes he can mould the Lithuanian.

Announced much earlier that it was supposed to be due to leaked photos, HRC revealed that Ken Roczen would be replacing Trey Canard beneath the American Honda awning days before the MXoN. A majority of fans knew about the deal for quite some time, of course, but no one was certain when the contract would expire. It was confirmed in the press release that Roczen will be on red until the end of 2019 at the very least.

Jose Butron and Marchetti KTM go together quite well, from the outside looking in, so it is hardly surprising to see that he re-signed and will be continuing his relationship with the turquoise outfit. The deal is for one year only and, in that time, Butron hopes to return to the top ten in MXGP. At the same time it was also announced that Alessandro Facca would be contesting EMX125 for the team.

Sneaking in just before October, Stefan Everts and Suzuki World MXGP made their intentions for the future quite clear. Jeremy Seewer already re-signed for his final 250F season, but has now signed an extension that’ll see him make his MXGP debut with the manufacturer in 2018 and then stay on for another year. Rarely does a rider with no wins on the world stage acquire such a sought-after deal.

Kawasaki tend to ensure they are the first to break some news at the start of October and, well, this year they were the only ones to even do it. Adam Sterry and Stephen Rubini will join Petar Petrov, who will move into the role of the star rider, beneath the Monster Energy KRT MX2 awning in 2017. Michael Maschio will return to the paddock with the team also, as he occupies a full-time position that will include working with riders and testing the bikes.

Electing to stagger their announcements somewhat, Marchetti KTM waited a handful of days to announce that Ivo Monticelli would again complete their team. Another one-year deal, Monticelli will compete in the MX2 class for the final time before he reaches the age limit enforced by Youthstream. The team actually played with the idea of moving him up to the 450F a year early, but obviously opted to head in the other direction. Later the squad announced that Roman Lata and Ethan Lane would represent them in the youth ranks.

A rider who was once heralded as the next big thing, Jorge Zaragoza will enter 2017 with a point to prove. There was no longer a spot for him at HRC so, instead, he’ll head to the Ausio Yamaha outfit and compete in all European Grand Prix rounds in the MX2 class. Zaragoza is also expected to ride a 450F in his homeland, which is a move that could pay dividends based on the potential showcased at the recent Motocross of Nations.

Back on the other side of the Atlantic; Justin Hill wasted no time in getting ahead of an official press release. Leaked thanks to his social media, it became common knowledge that he’ll return to the confines of the Monster Energy Pro Circuit Kawasaki awning in 2017. Hill will be joined by Joey Savatgy, Austin Forkner and Adam Cianciarulo beneath that awning.

It was already quite clear that Trey Canard would be moving on from Honda, a manufacturer he had ridden for at a professional level since 2008, once they released a video thanking him for his commitment. Red Bull KTM, where he will sit alongside Ryan Dungey and Marvin Musquin, is where he has landed for the coming season. The length of the deal was not made public knowledge.

More KTM news that, again, has been known for quite some time, despite the fact that a press release has still not emerged. Jordon Smith was initially set to return to Geico Honda, but felt that it would benefit him to move onto pastures new and move forward with his career. Troy Lee Designs Red Bull KTM picked him up and soon after it was announced that Alex Martin will be the second new rider beneath the awning.

Another deal that has been known for quite some time, but was only just formally announced. Colt Nichols will be moving over to the Star Racing Yamaha outfit next year, following a breakthrough season on the CycleTrader Rock River Yamaha. His teammates will be the returning Mitchell Harrison and Aaron Plessinger, along with former MXGP competitor Dylan Ferrandis.

A brief trip back to MXGP, where one of the smaller outfits confirmed their plans for next year. 8Biano Massignani Husqvarna have signed Iker Larranaga, Ivan Petrov, Tanel Leok and Rui Goncalves for next year, a move that will see all four riders compete in the full FIM Motocross World Championship. Larranaga, Leok and Petrov were unable to do that this year, as they were restricted by their former teams.

Another newly-signed Husqvarna rider, Brian Hsu, will strengthen the manufacturer’s presence in MX2. Hsu was initially expected to race a Suzuki in the USA, but has made a drastic change and will return to Europe with the smaller Maurer Racing Husqvarna squad. The deal is for two years and, through that time, he’ll be joined by Jernej Irt and Martin Krc beneath the awning.

A move that is away from the professional scene somewhat, but will have a direct impact on one of the sport’s biggest stars. Andrew Short has joined HRC as a brand ambassador and, as a part of that role, will be doing a lot of testing for both Ken Roczen and Cole Seely. Short, who retired in August, will still be present at a majority of the races, starting at this weekend’s Monster Energy Cup.

The Butler Brothers have had BTO Sports as the title sponsor of their team for quite some time, but the tide is changing. Rocky Mountain ATV/MC have taken control of the spot and, consequently, will have their logo littered across Davi Millsaps, Blake Baggett and Benny Bloss in 2017. Millsaps will become full-time, rather than just a supercross only, and Bloss will compete in 250SX before stepping up to the bigger bike outdoors.

A topic that sent the rumour mill into frenzy was finally confirmed yesterday: JGR Suzuki has officially been born. Justin Barcia, Weston Peick and Phil Nicoletti will continue to sit beneath the awning, but will find themselves sat alongside two 250F riders who have not yet been named. Matt Bisceglia has been heavily linked to one of those seats, although nothing is official just yet. Monster Energy, Autotrader and Toyota will continue to be the team’s primary partners.

When Valentin Guillod was spotted at the MXGP finale in a Honda shirt, it was quite clear which journey he would be embarking on in 2017. It was only just officially announced, however, that the Swiss pilot will lead the Assomotor Honda team into action in the premier MXGP class. Alessandro Lupino, Alfredo Bevilacqua and Mathys Boisramè (a new signing) will join him beneath the Italian awning.

Whilst Valentin Guillod moves away from Yamaha, Shaun Simpson and Arnaud Tonus will join the boys in blue in 2017. The new Wilvo Yamaha structure will house them in MXGP and both riders, who have tasted victory in the past, will benefit from factory equipment. Simpson obviously moves across to Louis Vosters’ set-up following the demise of Wilvo Virus Performance KTM, whilst Tonus returns to Europe following a failed attempt at establishing a base in the USA.

Like Tonus, Tristian Charboneau and Ryan Surratt will travel across the Atlantic in order to move forward with their careers. Charboneau obviously has the highest profile of the two, following some encouraging rides in his maiden Lucas Oil Pro Motocross campaign. Injury caused him to miss a majority of the season, however, hence why finding a deal for next year proved to be problematic. The pair will reside in the EMX250 category for Bud Racing Kawasaki.

Maxime Desprey will also find himself beneath the Bud Racing awning at select European supercrosses and French events, but it has been announced that he’ll jump across to the Gebben Van Venrooy outfit in order to race the 450F at the European rounds of the FIM Motocross World Championship. It’ll be the first time Desprey, who only recently breached the age limit for MX2, will contest the premier division.

The CreyMert Racing team shot to prominence this year when Iker Larranaga posted multiple noteworthy rides from beneath their awning. The Spaniard is, of course, set to move on for 2017, but the team have announced that Freek van der Vlist will fill his role. The Dutchman will compete in all European MXGP rounds in MX2 and will be joined beneath the awning by three EMX riders.

Back in America, Chris Alldredge has finally acquired a deal following a turbulent time with Monster Energy Pro Circuit Kawasaki. Alldredge has signed a contract with BPRMX Home Depot Yamaha team for the 2017 season, a position that will allow him to benefit from the wisdom of Rick Johnson. Johnson was announced as one of the people who would help the team move forward earlier this year.