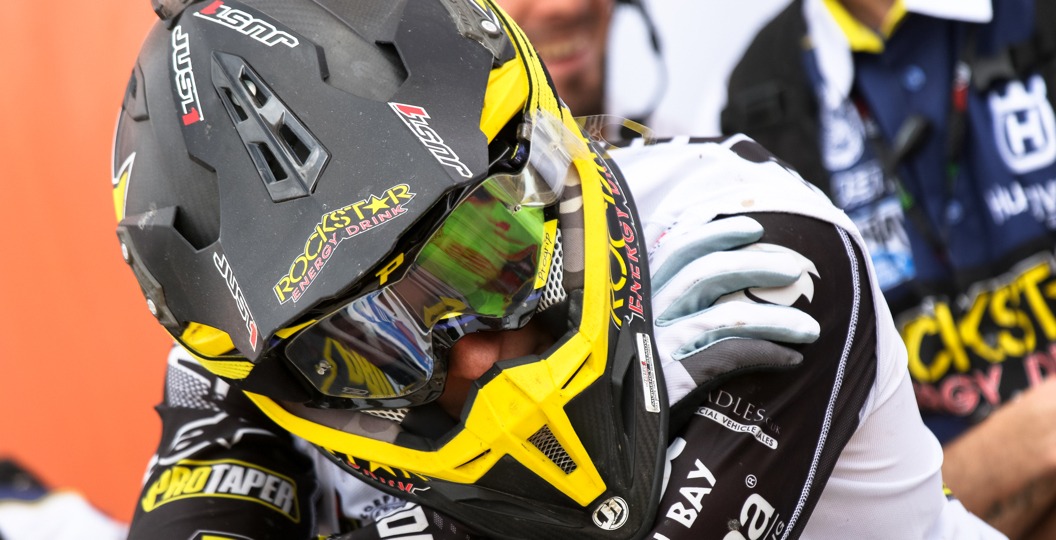 Max Anstie has arguably been the most pleasant surprise through four FIM Motocross World Championship rounds. Although the results have not been exceptional, ’99’ has shown great speed at times and could certainly contend for a spot on the box in the very near future. Who would have thought that we’d be talking about Anstie as the top MXGP rookie this early on?

MX Vice: The last time I interviewed you was Qatar and I feel like it’s pretty much the same story. Speed’s there, speed’s great, results could be better but they’re going to come because the speed’s there and that’s what you want!

Max Anstie: Yeah. To start with, yesterday was a good day. We did well in the qualifying race. We put ourselves in a good position. Start was dialed in, riding was good, I felt relaxed at that pace up front and that was nice. We’ve worked hard with the bike the last two weeks and I definitely think we’ve made big steps since Qatar. Now I feel like I’ve got another half a second. I can push harder. I can pass good guys. Then today I just felt really good going into the first race and I just really wanted to get a good start. I know that people say when you try too hard or whatever, but I was thinking that if I got a good start I’d be right up there.

I messed up the first one. I went too soon. I was too eager, anticipated it a bit. It didn’t go down. I braked, then I had to go. It was like, uh-oh, mess up. Then I came through, rode strong and made some good passes. I actually felt really good. On a track like this on the bike I’ve never felt this good in my whole 250 career. I’m on the 450. Normally I’m good when it’s flat and grippy but I actually felt really good today when it’s dry, hard, slick, bumpy and quite horrible. I felt good. I felt like I could push. So I knew second moto, again, if I got a good gate I could be right up there.

I was a bit too aggressive on the start and I wheelied a bit, so I was a little bit pissed at myself for doing that. Then I was in sixth or something on the first lap and I don’t know what it was but I just thought, ‘I’m going to go. I’m going to get to the front. I’m going to pass these guys now.’ I feel like I’ve got more speed on the first few laps than the guys that I’m riding with, so I feel like they’re going slow and I feel like I can just really push. I tried passing everyone. I was just going outside and then I ended up on the floor so I said, “Oh, great.” It didn’t go to plan. But then after that I just did what I could to salvage as many points as I could and come through.

It was pretty dusty out there in that second one. Shame, because yesterday was a strong race and I think result-wise could have been like that, but it’s a strong class. There are a lot of good riders. Everyone’s so fast. But I feel like I’m at a good place. I do feel like I’m at a good place, only four rounds in. If I were slow or I felt shit then I would be a bit worried, but I actually feel like if I just relax a little bit and get a couple of bits to click… I know when the sand races come as well I’ll be a lot happier. But I do feel good on these hard-pack ones, surprisingly. so the work we’ve been doing has paid off.

Obviously it’s your first year on a 450 so you’re learning constantly. When you start at the back like that or mid-pack and have to work your way through, can you take stuff from that that you can apply moving forward?

Yeah, definitely. I rode a lot with Febvre, Strijbos and those guys in the first and I can see them. I feel like I’ve been doing it the last four GPs now so I’m a bit pissed off at getting ninth and thirteenth. I keep getting ninth and thirteenth or whatever I finished today. I keep pretty much doing the same thing, but yesterday showed what we can do. I’m really pleased for my team and my teammate, Gautier. He’s been riding well but the thing is, we all ride together every day all week. We train together. So we know if one of us gets up there then we can all be right there, so it will be a nice day when we’re all right behind each other up the sharp end.

Yeah. The team did really well, actually. Yesterday I struggled a bit in timed training. I thought I’ll just make the bike as fast as it will go for here, but the bike felt like it does in Europe. It felt almost too fast. It’s a little bit slower, but it was too fast and too aggressive yesterday. So then I mellowed it down for the qualifying race and it was loads better. It’s weird. I assumed that, riding a 450, you just want the fastest bike you can, but you don’t. You’ve got to be really gentle on a 450 and especially on the start, too. Starts are really hard because you have to be so smooth and not too aggressive, otherwise you wheelie or it just doesn’t go to plan. I am learning a lot.

Through the first four rounds I feel like you’ve been a positive surprise. Obviously the results could be better but, like I said, the speed’s there. So I’ve been trying to figure out where this is coming from and whether we should have expected this. All I can think of is the Lommel ‘Nations when you were on a 450 and you were really fast then, so did you know all along that you’d be able to do this?

I knew I would be good on a 450, but it’s not so much that. I would have been really good on a 250 this year. It’s about the work and the way the off-season’s gone. Each year I’ve changed teams, which has been difficult, whereas this change, literally being a meter over there to a meter here, has been the easiest change. Going from 250 to 450 Husky has been the easiest change of my professional career. At the end of 2015 when I got landed on at the ‘Nations, it knocked me out for three months. I’ve actually had the full off-season to train.

I’ve got a great team and a great group of people around me. That’s what makes the difference. Honestly that makes a massive difference; these guys, having great teammates, being able to learn off them, being able to do my work, just go to the races and race and not worry about who I’m riding with or who’s around me. I think that is the main thing, the team and having time to prepare. That’s made a massive difference to me.