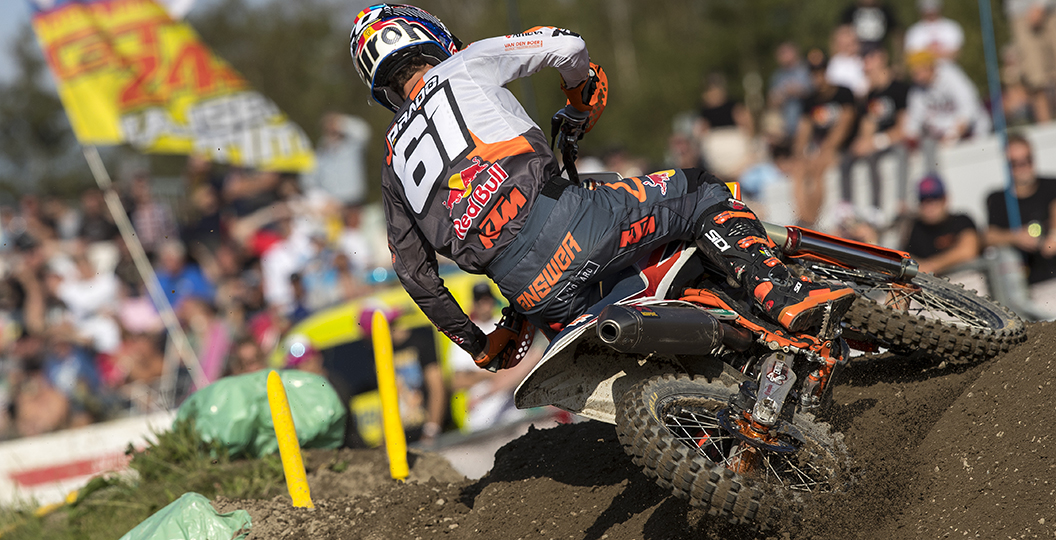 It’s not surprising in the slightest, but Jorge Prado was crowned the MX2 world champion after the opening race at the Grand Prix of Sweden. Prado did not stray from his normal routine in the thirty-minute stint, despite the high-pressure situation, and took a commanding win in front of the many Nordic fans who have flocked to round sixteen of the 2019 FIM Motocross World Championship.

The writing has been on the wall for a while now, as Prado has won twenty-seven of the twenty-nine motos that he competed in this term and claimed all of the overall victories that he has chased. From the sand of Lommel to the hard-pack of Semarang, he has been unstoppable and left his competition with no retort. It has also been well-documented that he is set to match the number of consecutive overall wins that Jeffrey Herlings today, should he stand atop the podium. The streak dates back to his Assen win in September last year. Greatness is oozing out of the Red Bull KTM camp at the moment.

There are so many facts that one can cling to in order to express just how impressive he has been this year. Four hundred and fifty-two laps had been led by him going into the Grand Prix of Sweden, out of a possible five hundred and thirty, and that even includes the round that he did not compete at! Take the Grand Prix of Great Britain out of the equation and he has only failed to lead fifty-one laps this season. Insanity. Twelve pole positions have been claimed too, out of a possible fifteen.

Prado has stood atop the box twenty-nine times in his career now, not including a potential victory in Sweden today. There was that maiden win at the Grand Prix of Trentino in 2017, in conditions that were not too dissimilar to what riders are experiencing at Uddevalla today, and since then he has won twenty-eight of the fifty MX2 rounds. It flew under the radar at the time, but that was a turning point in the class and one that was a sign of things to come. Another new era is upon us too now, as Prado only has two more races left on his trusty 250F and will soon embark on a journey into the unknown.

The first time that Prado will face those in the premier category will be at the Motocross of Nations, as he is set to step onto a 450. The prospect of a battle between Prado and his predecessor, Herlings, has fans watering at the mouth, as it is rare for the careers of two phenomenal talents to overlap. “He has done pretty well,” Herlings said when addressing the success that Prado has experienced in MX2. “We can admit that he would have won all of the races, had that not happened in England with the races that he missed, but it would have been the same for me.

“If I had not missed a race back in that time, I probably would have won them all as well. He will probably match it [my record for consecutive wins] and then go over it in Turkey and Shanghai, or wherever the last race is. He was really great this year and deserves to win the championship. He was the best by far. It is a good time to go to the big boys, which he will do at Assen. I respect that. He doesn’t have another option, because of the rule, but I respect that a lot… Going into the MXGP class at nineteen and fighting with the big boys.

“Next year will definitely be tough for him,” Herlings continued. “He will fight for wins, don’t get me wrong, but it’s different than the MX2 class. He had a great MX2 career. I would say almost as successful as mine: I won three [titles] and sixty-three GPs, but I was in the class way longer. If he stayed in the class for that long, then I think he would match that or even be better. I am happy I have still got some of my records, but he has done great.”