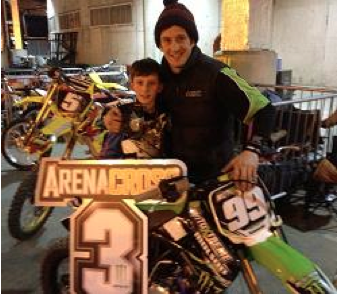 The waiting is finally over, the first round of the Arenacross UK series was held at the fantastic O2 arena last weekend in front of 7500 noisy spectators ready for the first action of the year. For our rider Callum Gasson, it was a venture in to the unknown. Callum has not competed in a national indoor race prior to stepping up to the 85cc class and we did not know how competitive we would be.

The track looked awesome during track walk, the surface broke up after the pro’s had gone out and gave the riders a very difficult test. The loose surface required Events22 to scrap a qualifying practice to ensure the maintenance team had sufficient time to prepare the track for the night show. Unfortunately we lost an oportunity to familiarise with the track. Callum qualified in third but the gap to the front two more experienced riders was substantial.

In front of the large crowd Callum delivered the first team podium of the year bringing the MotoXtreme Kawasaki home in third position. What’s even more satisfying, Callum halved the deficit in laptimes from the qualifying session.

Congratulations to Kawaski’s Dylan Woodcote who rode a fine race from the front and to Harry Kimber who finished second.

Nice to see Ross Burridge of Kawasaki Motors on hand to congratulate both Dylan and Callum immediately after the race for collecting two of the three Kawasaki podiums of the evening.