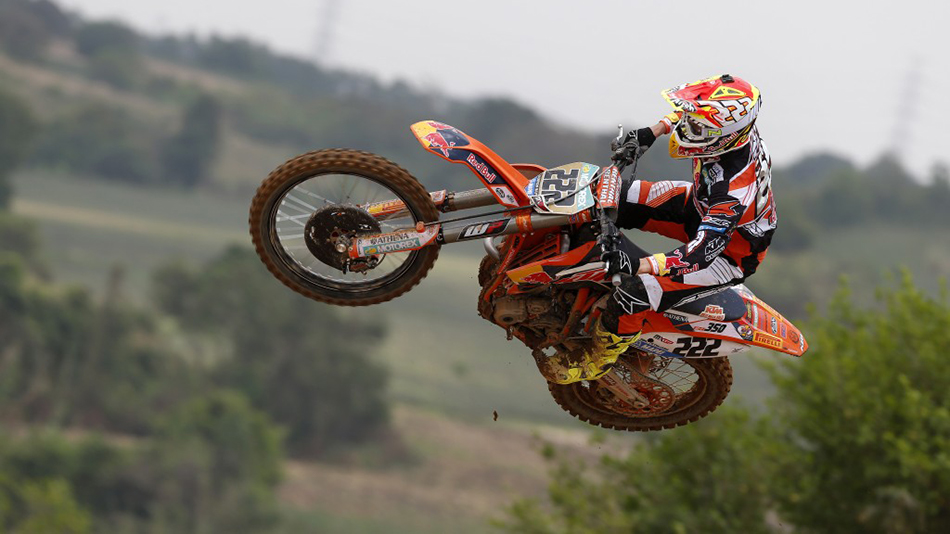 Cairoli and Herlings Win in Thailand!

Red Bull KTM Factory racers Antonio Cairoli and Jeffrey Herlings both delivered double moto wins in the MXGP and MX2 classes at the MXGP of Thailand on Sunday to take their respective GP victories and the red plates as championship points leaders.

While it is early days in the 17-round championship, KTM’s two reigning world champions signaled their intentions in the second round of the championship with the kind of flair that has allowed them, and KTM, to dominate their classes in previous seasons.

Both Cairoli and Herlings laid down the marker of their intentions in their opening motos on the St Racha circuit with Herlings getting the action underway in the opening MX2 moto. His second place in qualifying earned him a place next to Dylan Ferrandis on the starting line and their recent rivalry was evident with a touch of wheels as they launched out of the gates.

But Herlings, who returned to racing last week in Qatar after a near six-month injury layoff, had taken control of the race 10 minutes into the 30 minute plus 2-lap race, and with an advantage of six seconds. Looking much more comfortable on the track than he did in Qatar last weekend, the double MX2 world champion went on to take a solid win while his rivals fought it out behind him for the minor places.

In the opening MXGP moto Cairoli was very much at home on the track that was both rough and technical, despite blistering tropical heat and high humidity. The Italian superstar was also clearly in good shape after being hindered by a small ankle injury in the opening round last weekend.

A clear winner in Saturday’s qualifying where he led the race in every lap, the Italian powered his KTM 350 SX-F out of the start gates into third place. A winner of both motos on the Thai circuit in 2013, Cairoli wasted no time capturing the lead in the opening laps, dominated the first race and crossed the line with a confident 14-second lead over Clement Desalle.

Herlings returned to the track for his second race and got away well, quickly settling in behind leader Max Anstie. The Red Bull KTM factory rider then closely shadowed Anstie in the middle part of the race, carefully casing the circuit for opportunities to pass him. The British rider determinedly held onto his lines and Herlings’ opportunity finally came with 10 minutes and 2 laps to go. He ripped past Anstie and set about putting distance between himself and the rest of the field, finally crossing the line on his KTM 250 SX-F almost eight seconds in the lead, to pick up his double race, MX2 GP victory.

Herlings had been home in the Netherlands in between the two fly away races where he said he had been working hard on his starts and while he dominated in 2013, he said the competition was tightening up: “I’m on the same level, but the competition is stronger this year. I’ve been injured for a long time so I’m just happy to be here and on the track again. For this year I want to have fun and to win as much as I can. The bike was perfect this weekend and we had no problems, but it was a big adjustment coming from Holland where it was 5-10 degrees, into this heat and humidity.”

Herlings Red Bull KTM Factory Racing teammate Jordi Tixier of France ended the day with a 5-6 result in the competition for overall seventh. Tixier said, like last year, he struggled with the heat and had problems with his stomach. “ I tried to find a solution but it was not enough to keep me fit for the entire race. But I did get good starts and my first laps were not so bad, but after about 15 minutes the pain was too bad. I just did my best and gave all I could.” Tixier said he had had a similar start to the season in 2013 but came back strong to finish second overall, so he was confident for the season ahead.

When the MXGP riders returned to the circuit for their second moto, Cairoli was third out of the gates and quickly moved up to second behind Desalle after slipping past second placed Jeremy van Horebeek. He rode a typically careful and calculating remaining race, even though the result was going to determine the outcome of the overall GP. Desalle was in the lead right through to the final five minutes, but Cairoli was always in striking distance and in his inimitable style, made a successful bid for the lead with just minute to go.

Tony Cairoli: “It was a nice weekend for me and I like this track a lot. I think everyone struggled with the heat but it was the same for us all. I was just happy to finish the race and win the GP.”

Cairoli’s factory teammate Ken de Dycker is still recovering from injury and did not contest the opening two rounds.

Both Cairoli and Herlings leave Thailand with their respective red plates as championship leaders in their luggage.