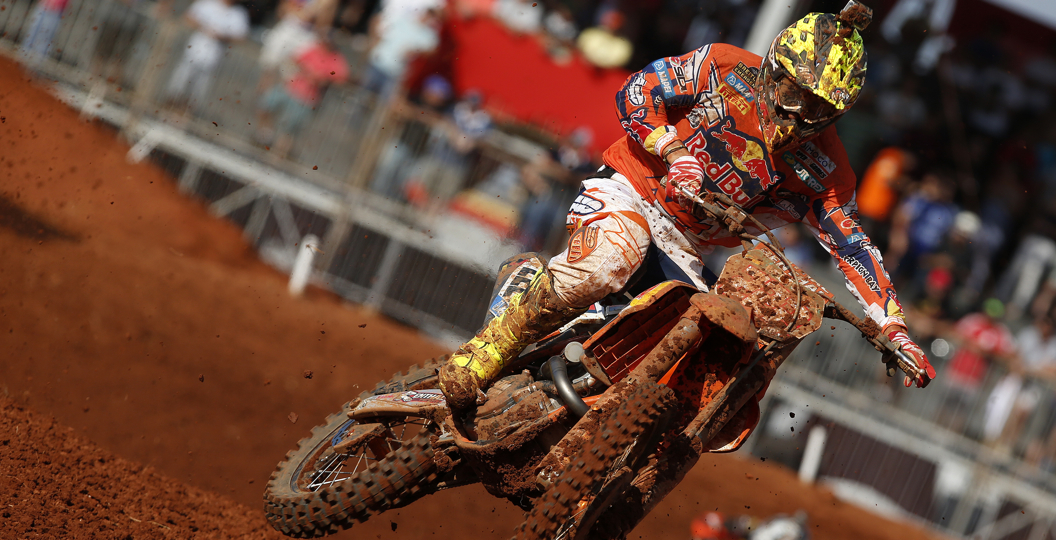 Red Bull KTM Factory Racing’s Tony Cairoli settled his career eighth world motocross title on Sunday in the opening MXGP moto at the Grand Prix of State of Goias in Brazil to send the Brazilian fans into a frenzy of excitement as they chanted his name.

Greeted by jubilant members of KTM’s factory team, Tony Cairoli crossed the line in fifth place in the opening race to give him an unassailable lead in the championship points of 89 with just 75 up for grabs in the three races that remained.

With the victory he moves another step closer to challenging the ten world titles of Stefan Everts, manager of KTM’s MX2 factory team and one of the first to congratulate Cairoli in the finish area. It was the second time that Cairoli has secured a world title in front of the enthusiastic Brazilian crowd.

Despite racing with a painful eye injury picked up in Saturday’s qualifying, Cairoli, a Red Bull sponsored athlete, rode his KTM 350 SX-F to a 4-3 result on Sunday for his eventual overall third. The GP went to Germany’s Max Nagl, with Gautier Paulin in overall second. His teammate Ken de Dycker of Belgium did not compete in Brazil as he has undergone recent surgery to correct a wrist injury and opted to finish his season after the last European round.

Cairoli said it was amazing to have taken his eighth title. “When you are a kid you wish for such a thing but you never think you can do it,” he said. “Its hard work but it gives you back many good things. I managed to finish on the podium in all but three races and that was good to achieve points for the season. This was a track that was nice for training but when you race here there’s a lot of big jumps and not many places where you can really ride your bike and make a difference. Now I will go to Mexico and it’s always my goal to win. Then the next big goal is the Motocross of Nations and I will try to be on the podium for the Italian team.”

Tixier still in the hunt for MX2 title
With the championship title in MX2 still up for grabs, it was another dramatic day on the MX2 track in Brazil. KTM’s Dutch rider and championship points leader Jeffrey Herlings is still recovering from a broken femur so it was up to his teammate Jordi Tixier to try to pick up some more points in this two-way race for the title.

The French rider scored a 5-4 result for overall third in the two motos to narrow the points difference to Herlings to 23 going into the final round in Mexico next weekend. Roman Febvre won Sunday’s MX2 Grand Prix and the minor places went to Dylan Ferrandis and Tim Gaijser. Both Herlings and Tixier compete on the KTM 250 SX-F racing bike.

Tixier had a big crash in Saturday’s qualifying and he said while the track looked like it had a lot of grip, it was in fact very slippery. “In the first moto I had a really bad start, I think I was last going around the first corner but in the end I came back to fifth. My feeling was not so good on the track but I took a better start in the second moto. Then when I tried to push I made a mistake. Fourth place was not the result I was hoping for and I was not on the box, but I still got some points for the championship and there’s still one more round to go.”

Next Round: September 14 – MXGP of Mexico