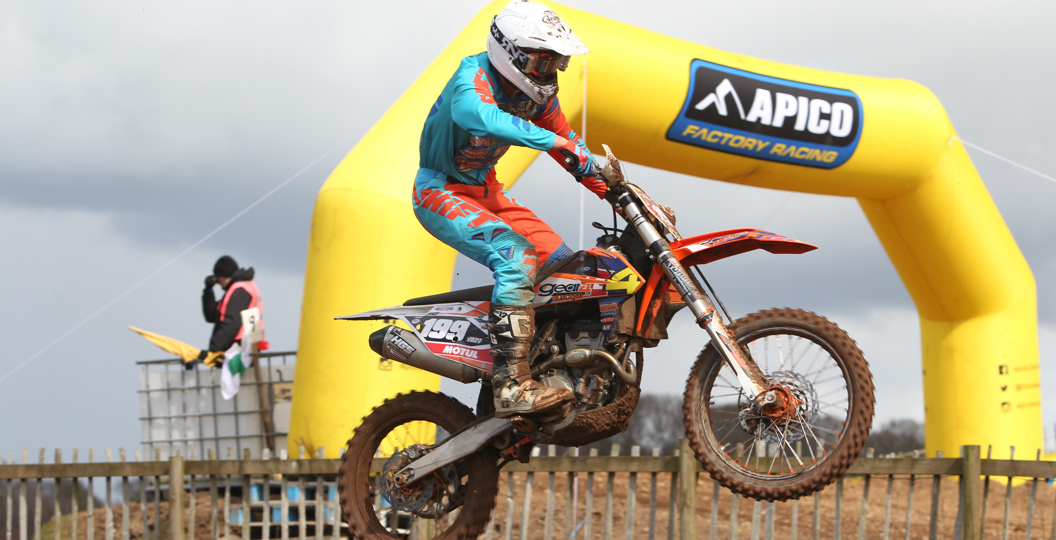 The Thor British Youth Nationals heads to Brampton, Cumbria, for round two of the championship on the weekend of 15th and 16th April 2017.

The second round is looking set to be a good one, just like the recent season opener at Culham MX Park in Oxfordshire, as the juniors look to continue to gain those all important points for the championship.

The Brampton circuit consists of fast straights, climbs and drops with big jumps, technical corner sections, as well as rough and bumpy sections. The track is a popular one for the UK’s best youth riders and guarantees to provide some first-class racing for all to watch.

The championship spots are currently being held by Wal Beaney, Charlie Heyman, Dominic Lancett, Rossi Beard and Howard Wainwright. All eyes will be on them at Brampton to see if they can retain the top spots in each championship chase.

We caught up with local junior 65cc rider Ryan Waggott, who is from Carlisle, as he prepares for his ‘home’ round of the series.

BYN: You’re a local rider to Brampton, so we would like to know what your thoughts are on the track as many riders say it’s a technical sand track and is really enjoyable to ride?

Ryan Waggott: As I have just moved up onto a 65 I have only raced at Brampton on the main track a couple of times. The last time I raced there was for the first round of the East Cumbria MXC. It was a miserable, wet and freezing day. My hands were frozen! The track got really rough and cut up; I had a few offs, but was determined and had a 1-1-3 result with the overall win.

What are your plans for round two of the Thor British Youth Nationals. Are you doing any training or practicing prior to the event? If so, where and why?

I’m really lucky as Carlton Husband trains me; he takes me, Ollie and Sam out every weekend when we’re not racing and we ride mid-week. I’m in the RMJ Academy, so Ashley Wilde and Richard-Mike Jones also train me. I raced last weekend for the first round of the North East Championship at Havering, which is a good sand track. I came away with five-out-of-five wins. We will probably go to train at another sand track like Preston Docks or FatCat the week before Brampton.

Tell us a bit about your past history in the sport. How long have you been racing? What events have you competed in previous to the ‘nationals? Is this your first year competing at national level?

I have been in the motocross scene all of my life. My Dad, Will Waggott, was British quad champion. He rode for KIK and Honda UK. I started at six-years-old on the grass field track at Brampton and progressed from there. Last year I was North East Auto champion and won every race in the championship, Northern Auto champion, finished fourth in the Judd Premier Cup, second in the MX Masters Kid’s British Junior Cup (Auto A class) and sixth in the MX Master Kids (Auto A class).

Looking to the rest of the championship, what will your approach be? What’s your goal for the end of the year?

It would be awesome to finish in the top ten, but there are a lot of fast riders and tough competition with a few more years of experience racing on a 65. We will have to see how it goes!

Seeing as Brampton is your home race, maybe you can tell us why the locals should get behind this event and come to watch?

The Gelt track at Brampton has been on the go for years – my Dad raced there when he was a boy! Mr. Spencer, my headteacher at Fir Ends Primary School, is great, as he lets me have time off to train. It’s brilliant that the BYN is coming to Brampton, so my teachers and friends can come and see me race in a nationals. Motocross is so exciting; I love it! I’m sure if everyone came just once they would want to come every week!

If you are looking for something to do on the weekend of the 15th and 16th April, then head to Brampton to see Ryan and the rest of the Thor British Youth National riders. The six round Thor British Youth Nationals continues its 2017 journey at the natural-terrain track with five classes (65cc, Small Wheel 85cc, Big Wheel 85cc, 125cc and Open class). To find the track, use postcode CA8 1SY.