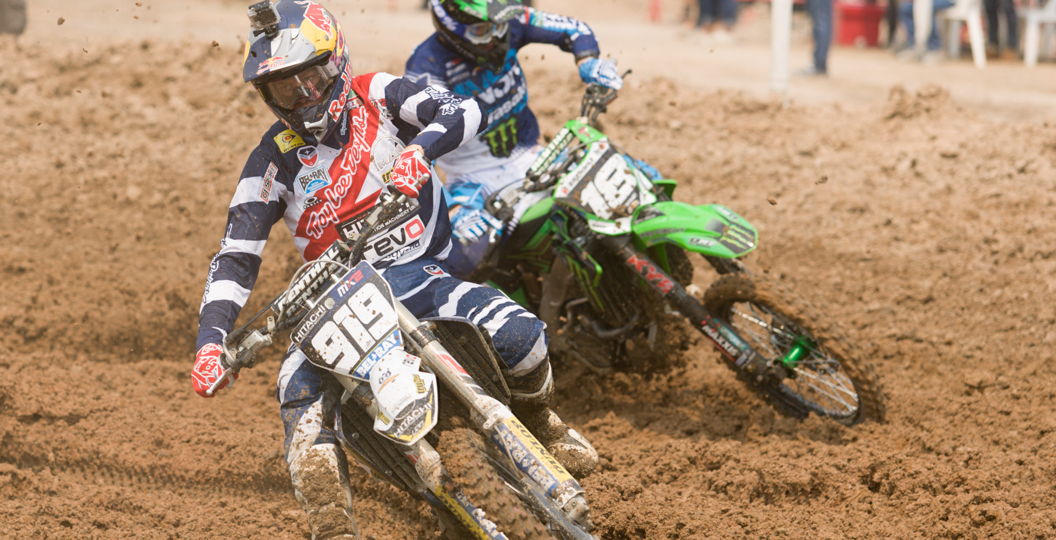 The Buzz: MX2 in Britain

Without internationally recognized talents like Max Anstie contesting the full series, there has been very little hype surrounding the MX2 class that will feature at the 2016 Maxxis British Championship. However, the title fight between Vsevolod Brylyakov, Ben Watson and the rest has the potential to be quite unpredictable.

I honestly expect the fight for the number one plate to come down to Brylyakov and Watson, but there are various question marks surrounding each contender. Adam Sterry is in the mix as well, but is a complete wildcard as he could be fifty points down heading into the second round. Where do we begin? Well, we’ll start with the man who I believe is the fastest.

Vsevolod Brylyakov is an underrated talent, in my opinion, as he has the potential to be really good. The speed, which is widely recognized as the hardest trait to acquire, is there and it is just a matter of slotting the other pieces of the puzzle into place. That is what worries me, however, as he could be ridiculously good in one moto and then crash out of the next. I feel like the fact that the field isn’t as competitive as it is in MXGP may help Brylyakov eliminate these mistakes, as he should know that he doesn’t need to ride over his head and enter each round thinking he is ‘the guy’.

Ben Watson was phenomenal at the first round last year, but struggled to replicate that form at the following rounds. Why? Who knows, but he has had enough time to learn now and should be ready to put himself in a position to contend for a title. There is no reason why he shouldn’t be on the podium in every moto and, hey, his chances will be pretty good if he manages that. Although consistency hasn’t exactly been his greatest strength in the past, ‘919’ rarely crashes out and that could serve him well against this field.

Who is next in line? Well, with Sterry injured, I would point to Martin Barr. The Irishman has obviously had a phenomenal start to the year at a domestic level and has arguably not been in a position as good as this in recent years. Will that translate into a campaign where he challenges for a title? That is tough to say, as history states that crossing the line in every single moto is not a strong point for Barr. Then again, you could say the same about the two riders previously mentioned…

Adam Sterry is perhaps more consistent than anyone else in the MX2 class, but will obviously miss round one and start the series facing a hefty deficit. Could he overcome it? It isn’t impossible, especially considering how there isn’t a clear cut favourite, but he’ll have to be almost perfect through the rest of the season. It’ll be an exciting story to follow, but one more mistake from Adam once he returns would rule him out. The fact that Max Anstie is racing round one as a wildcard will aid him, as he should steal points from Sterry’s rivals.

Bryan Mackenzie, Steven Clarke and Neville Bradshaw, who has dropped a two off the end of his number, are safe bets to finish around fourth, fifth and sixth most weeks. Bradshaw is perhaps the most questionable, as he wasn’t quite on pace last year, but then a return to full-time racing could see him climb back to this level. That seems logical on paper, but honestly I see him duking it out in the tier below for the most part.

Jordan Booker, James Cottrell, Lewis Trickett, Lewis Tombs, Liam Knight, Michael Eccles, James Dunn, Nathan Dixon, Luke Norris and Jake Millward should filter in behind that group in some order. It wouldn’t be surprising to see some of these riders excel on certain days and crack the top five, especially considering a few of them have done it before. Doing it consistently is perhaps the greatest challenge, as Knight, for instance, was brilliant at round one last year but never featured at the front again.

Finally, what about the biggest question mark? Mel Pocock was shooting at a return this weekend, but at the time of writing it still hasn’t been confirmed whether he’ll line up or not. It’ll be a case of building as the season progresses for Mel, following that horrific injury last year, but it’ll just be great to see him behind the gate again. That alone should draw more attention to this year’s series.