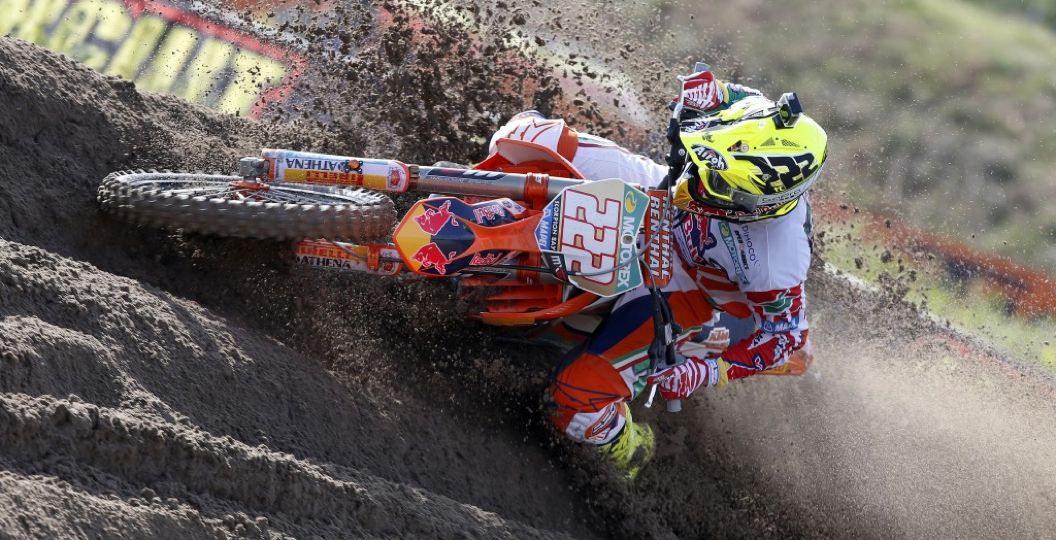 The two lead riders of the Red Bull KTM Factory Team were in blistering form this weekend at the MXGP of Finland both taking 1-1 moto wins to seal wins in the MXGP and the MX2 GrandPrix. Tony Cairoli and Jeffrey Herlings both forge ahead in their respective world championship points.

Tony Cairoli and Jeffrey Herlings delivered near faultless rides in their two respective motos. It was Cairoli’s seventy first career GP as he heads for title number eight while the still 19-year-old Dutch teenager Herlings picked up an effortless forty third GP win and is now just five points shy of sealing his third title.

MXGP
Cairoli, the Red Bull-sponsored Italian athlete now has a 62-point lead over second placed Jeremy van Horebeek of Belgium whose second race was marred by a crash that cost him valuable time in the pits to straighten bent handlebars. His main rival Clement Desalle also did not race because of injury.

Cairoli: “This was one of the most difficult races this year because the track was bumpy and very technical. But we had two good starts and my condition is improving so I’m happy with my results and my starts are getting better and better.”

Cairoli’s factory teammate Ken de Dycker of Belgium wrapped up his day with a 15-8 result for overall twelfth on theKTM 450 SX-F. Still hampered by a lingering wrist injury, de Dycker said his wrist support had come loose in the first race and he had stopped to fasten it. He has also been ill and said he felt like he didn’t have any power on the difficult track.

MXGP factory team boss Claudio de Carli: “We can say that Tony had three good starts this weekend, also in qualifying. He wanted to push more in the first moto but we told him to take care and remember the championship is the goal and not a single race. He had a very good rhythm right from the start of the second race. He took an easy lead and was riding smooth and relaxed. This was one of the most technical tracks and was tricky because it was sand on top but hard surface under it.”

MX2
Earlier in the day Herlings had delivered a display of riding that not only attracts admiration but also frustration from his fellow riders who seem to have no answer to his dominance. He got away cleanly on his opening moto behind KTM rider and hotshot winner Jose Butron.

Herlings was in the lead at the end of the opening lap but then slowed to observe a yellow flag warning, while two other riders, who were later penalized by race officials, shot past. He was back in front by the end of lap two and looked a winner all the way to the line. He won his races on the KTM 250 SX-F by margins of more than a minute. He heads to the next round with a 145-point lead and if he says in winning form may seal his third world title at Loket in the Czech Republic on July 27.

Herlings: “It was a great weekend even though I had a small crash in qualifying on Saturday. It was always a dream to win the championship at home or in Belgium but if I have a solid weekend in the next round like I had here I will try to take it at Loket. But its not settled yet and there’s still another two weeks to go.”

It was a tough weekend for Herlings’ factory teammate Jordi Tixier of France who crashed hard in Saturday’s qualifying and was only walking with difficulty on Sunday morning. Tixier was handed second place at the end of his first moto when Butron and Dylan Ferrandis were each handed a 10-place penalty for the yellow flag infringement. He then raced to a brave fourth in the second to salvage a 2-4 result for third overall and consolidate his second place in the championship points standings.

Tixier: “I didn’t feel so good in the fist moto but with the penalty for the other two riders I got second place. I got a good start in the second moto but ten minutes into the race I felt my back was completely blocked. The track was rough and not easy but I managed to finish fourth for some good points.”

The Finnish circuit also hosted the (one round) EMX65 Championship won by Russian KTM rider Nikita Kucherov with a 2-1 moto result. Jago Geerts of Belgium also sealed the EMX85 title on his KTM with a decisive 1-1 result. Both young riders said they hope to be able to win their respective world titles when the single round competition is held in Belgium in August.