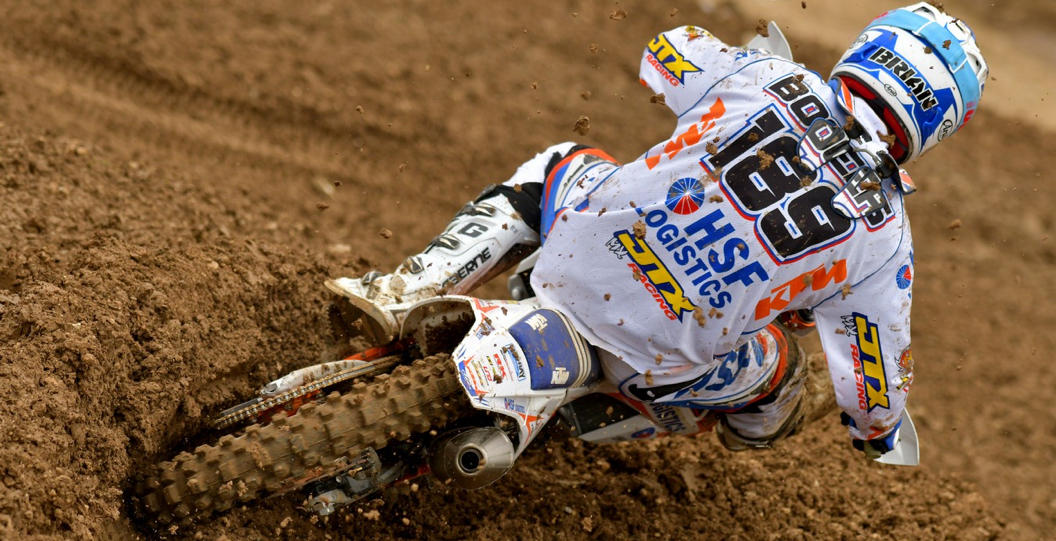 Bogers close in on top five

Brian Bogers of the HSF Logistics Motorsport team is on a run of consistency, having scored his fifth successive top 10 finish in a motocross Grand Prix. At St. Jean d’Angely, France , the Eindhoven resident finished seventh last weekend, with a particularly strong second race which brought him to sixth gaining attention.  Roberts Justs had a troubles weekend, during which a number of crashes held him down to a meagre harvest of four points.

Calvin Vlaanderen qualified well in tenth position, but during Sunday’s warm-up he crashed heavily when his foot slid off the footrest just as he was taking the finish jump. Initial fear were that he had broken his wrist, but a check up at the hospital showed up no fractures. Calvin will be visiting Dr Claes in Belgium this week for another check-up. “I am happy that nothing was broken, although it feels as if a train ran over me. I can hardly move and can’t walk properly due to the pain. I was really lucky that I did not come of worse, ” the battered rider remarked.

Brian Bogers was clearly set on a strong result this weekend. He started the qualifying well, but when he tried to set an even better time, he crashed hard. His upper back, neck and shoulder showed visible signs of wear, and he went to the track doctor for a check up. He got the all clear, but had to grit his teeth through the pain during the qualifying heat. He did well under the circumstances to qualify ninth.

Brian was stiff as a rod on Sunday, but determined to continue his run of good results. After a bad start in race one, he showed true grit to get back up to ninth. In the second race, he quickly settled into sixth spot. He closed in on a group that went all the way up to third position, but try as he might, he could not get any further forward. Some backmarkers also made matters dicey and he decided to take the safe option, claiming his sixth spot.

“On Sunday I was completely stiff and some vigorous massaging got me loose enough to race. I got through the day with the help of pain medication. The riding went well, though, and I’m happy with my results, particularly in the second heat,” Brian remarked after the race.

Roberts Justs was also in the wars during the weekend. He was holding ninth position in the qualifying heat when contact with another rider brought him down. He sustained injuries to his head, shoulder and hip. The team were concerned , but after a decent warm-up session on Sunday, Roberts decided to race. In the first heat he had just worked his way into the top ten when he came across the bike of a fallen rider. He could not avoid it, and crashed himself. Despite this, he still finished 17th, which added four world championship points to his tally.

In the second race, he was riding in seventh position when he crashed together with Aleksandr Tonkov. “I can’t believe my bad luck! I had three heavy crashes during the weekend and each one was more painful than the next. I had the speed for much better results, but this simply was not my weekend. I am extra motivated for the next round, though,” Justs remarked.

Brian has gained some ground and is now 11th in the world standings.  Roberts holds 14th place, and Calvin is 16th, after coming away from France with no points. The team will line up at the third round of the Dutch masters of Motocross next Sunday, and the week after that they will  participate in the next round of the world championships at Matterley Basin in England.