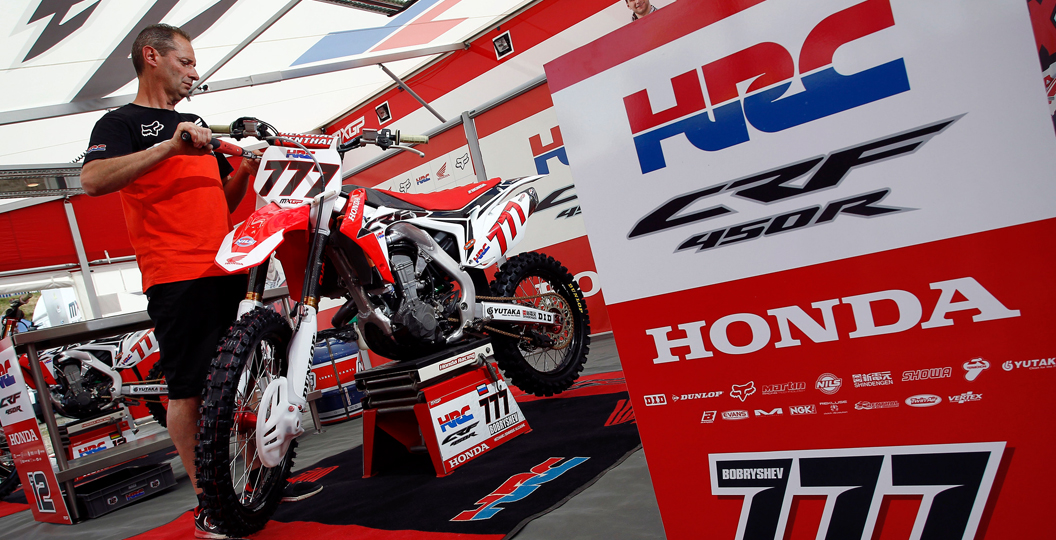 Bobryshev takes Team HRC to the temple of Italian motocross

Team HRC head to Maggiora for the MXGP of Italy this weekend with Evgeny Bobryshev on a lone CRF450RW as Max Nagl will delay his return to the Championship after his injury back in April.

Max and the team have taken the decision not to risk a premature return, especially given the bumpy nature of the Maggiora track and the associated shocks through Max’s recovering hands. In the testing crash in Holland he broke the scaphoid in his right hand and fractured a metacarpal in his left hand, and whilst both have healed well an extra week of rest will mean Max is as fit as possible for his home Grand Prix. Consequently, the German plans to return next weekend at Teutschenthal.

Maggiora made a return to the World Championship calendar last year after a hiatus but is a track steeped in motocross history. The area of Maggiora in Northern Italy, some 80km north west of Milan, was one of the first to hold motocross races with a dedicated track created in 1958, and since then has gone on to host such memorable races as the Motocross of Nations in 1986.

Honda has chosen the MXGP of Italy this weekend to reveal its 2015 CRF450R and CRF250R models to the motocross press for the first time in Europe.

Evgeny Bobryshev #777: Maggiora is a natural track and last year I enjoyed it. There’s a lot of up and down, and it’s quite good for fans to watch too because there are nice sections like the big downhills. The track is much better for me than France as I can put all my power down and ride to my style. We’ve done some good testing for this weekend – we’ve improved the bike again and I’ve had two weeks of training. I was happy that I enjoyed riding in France – I had so much pain in other races in my back or in my foot, but I could enjoy France so it’s getting better and I’m feeling that I’m coming back now and after Saint Jean d’Angely I have better confidence too. I haven’t been racing in the top for a long time so I now need just more race time. I’ve worked hard training for fitness and my riding but in the race it’s different. For sure I want to attack but I don’t want to do something stupid so we’ll see what we can do.

Roger Harvey:  Maggiora is a classic track – and it’s great to go there for the second time since it returned to the calendar. Unfortunately Max is not quite ready for a return this weekend so we’ve decided that he won’t race here to give him another week to recover before his home round in Germany. Bobby has been training hard and gaining some endurance again as he gets back to peak fitness so we’re expecting a faster and quicker Bobby in Italy. The Maggiora track is an exciting one as it has some big uphill and big downhill sections so you have to have the bike working really well. There are also some big braking bumps into the corners which are tough on the riders, which is another reason why Max is going to rest another week before returning to action.