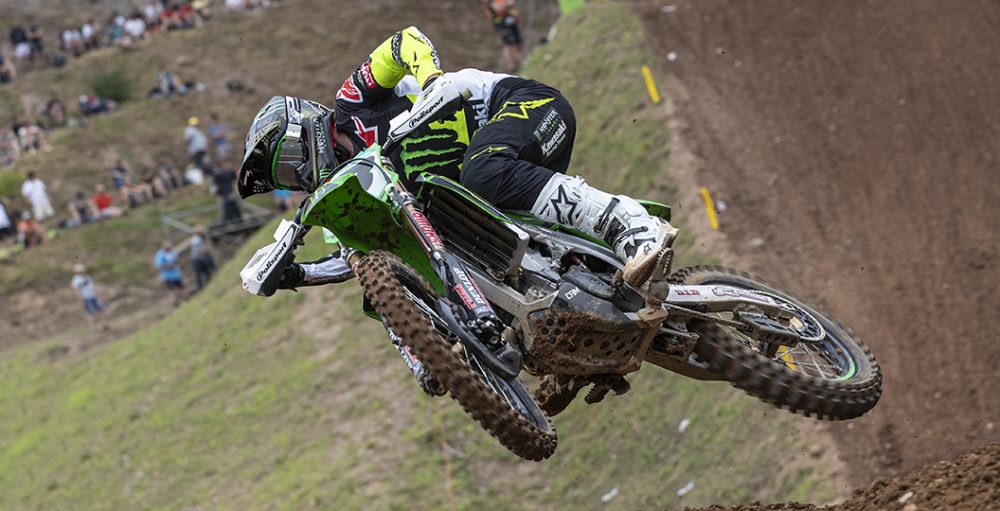 There has been a lot to discuss since the 2021 FIM Motocross World Championship fired into life a couple of weeks ago, as there are many exciting subplots in each category. Romain Febvre has been lost in all that excitement and thus he has not received the respect that he truly deserves for such an impressive beginning to the campaign.

Febvre has not started a term as good as this since his title defence – this is seemingly a step up from where he has been lately. The pressing query now is whether this means anything going forward. There are some who believe he will taper off as the rounds wear on, moving away from moto winner and instead sitting on the cusp of the top five often. It is a respectable opinion – that is where he has spent much of his time since the middle of 2017.

There are two reasons to think that this trend will continue and keep moving in a positive direction though. The first being the arm-pump surgery that was performed earlier this term, which Febvre has hailed as life changing. Febvre was never one to persistently complain about arm pump – it was a constant issue though that has accelerated somewhat in the last year or so. There are now no issues on that front, and he can ride as he wishes. Imagine if this surgery was done a couple of years ago!

“I felt really good from the wintertime,” Febvre told MX Vice. “In the past I was struggling with my arms and got arm pump many times in my career before. I could not ride that fast anymore, and after 10 or 15 minutes I had no power in my hands. I was really struggling big time with that! They said that I had a problem, so I made the operation and since then it has been like day and night for me. I am feeling like now I can fight for the championship, for sure, and my speed has been good. My training also. The bike is really good on every kind of surface, like sand or dirt.”

Febvre is dangerous with confidence. What makes him more of a wildcard is the fact that it has been a very long time since he possessed this self-belief. The broken femur that he suffered in late 2019 caused him to miss a considerable amount of time with Monster Energy KRT before his debut season with the team, hence why a productive winter prior to the current season was such a welcome change. There were set-up issues in his final years as a YZ450F rider too, as well as multiple knocks to the head that slowed his progress quite regularly. This is the first time that he has had momentum to lean on.

“It is always difficult,” Febvre continued about his surgery in the wintertime. “You hear a little bit of everything about that [arm pump surgery] – some riders do it and others do not. Some still struggle with it after the operation. I did many tests to be sure that I had a problem. Even some riders do the operation without knowing anything. That is why. Some have the problem and some not – it is how you are born. I struggled a little with that from a young age, like I said, but some days yes and some not.

“I never got arm pump in practice, but this winter I could not ride for more than 10 minutes. We were thinking that something was wrong with my arms. We had time to do it. It was time to check. We went to see doctors in the south of France – a good doctor – and I did many exams. They saw that I clearly had a problem with that. I did the operation, and it took some weeks. When I jumped on the bike it was like… I was breathing again and had power in my hands for the whole moto.”

Febvre radiates excitement and positivity now – that goes far once a leg has been swung over the bike. The fact that he has only mounted the Grand Prix podium once so far knocks some of that shine off, but he was just one lap away from a moto win and podium finish at Matterley Basin. Had Gajser not passed him in the dying seconds of that moto, he would have the most moto wins this season (tied with Gajser) and appeared on two out of three podiums. The perception would be quite different if that was the case.

The message here is quite simple: Everyone is going to talk about Jeffrey Herlings, Jorge Prado, Tony Cairoli, and Tim Gajser entering the Grand Prix of The Netherlands. There is a fifth party in this battle though – that is something to celebrate as a fan. Febvre has a better track record in the sand than some would think too; he has won at Valkenswaard before and that surface is not too dissimilar to what the riders will experience at Oss. The top step is clearly his focus.

“The next race is in deep sand,” Febvre said looking at what is to come. “We are just going to go to our place in Belgium and ride some sand a little bit, but nothing crazy. We are used to… I mean, we ride almost every week in the sand. I know my fitness is good. I can ride pretty good in the sand, so I am really looking forward. I have really like… I want to beat Jeffrey [Herlings] in the sand one time. I feel, like I said already, on almost the best shape of my career right now. If it is one moment to do it, then it is now.”

If Febvre does indeed go out and beat Herlings on home turf this weekend, it would be quite the statement. Everyone would be forced to sit up and take notice. Game on.