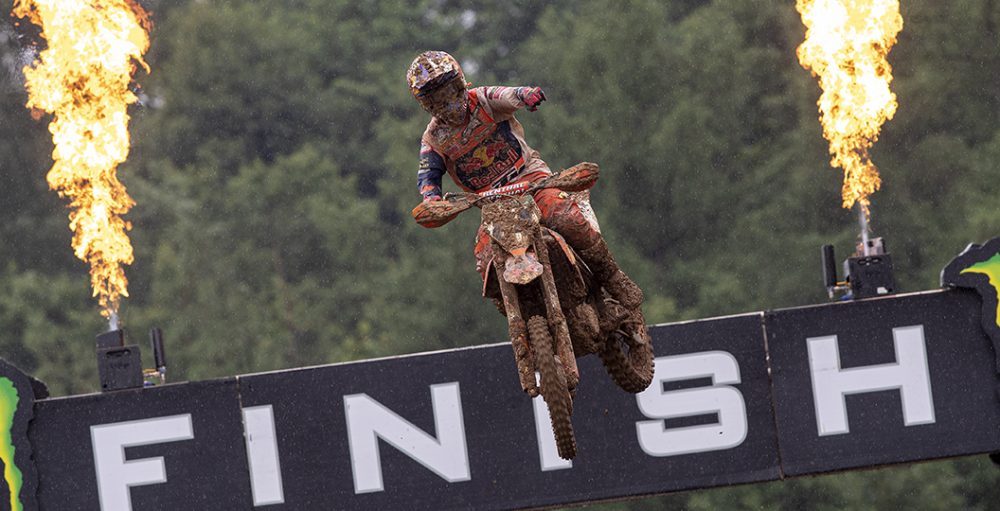 Jeffrey Herlings returned to winning ways at the third round of the 2021 FIM Motocross World Championship, the Grand Prix of Italy, via uncharacteristic 6-1 moto scores. A jammed rear brake halted his progress in moto one, of course, but he still salvaged decent points in what could have really been a disastrous stint. The speed that he showcased whilst charging through the field was most noteworthy – he was lapping multiple seconds faster than anyone else on track at different points.

Herlings had a flight to catch immediately after the second moto at the Grand Prix of Italy, but gave up as much time as he possibly could for a post-race interview. Herlings talks about his speed, breakthrough, mentality and drought below. This interview was originally posted as an MX Vice post-race podcast, presented by FLY Racing and the Formula helmet, which can be found on all major platforms under the MXVice.com feed.

MX Vice: You have got a flight to catch, so we will make this quick. I guess you are just a mud guy now! You just need mud races. Seriously though, once you started charging in the first moto then your pace was so much higher than everyone else. I feel like today was a real turning point for you.

Jeffrey Herlings: Yeah, it really was. The only turning point was that the starts were not so great, but besides that I was the fastest in time practice and then in the first moto, you know, the first few laps I was not struggling. I was really like… It was all calculated. It was hard to pass, but in the last 15 minutes I was really going to give it a rip. I had a stone between my rear brake and, you know, there are so many stones on the track that it is just possible that something like this happens. I was so pissed about it. I was like, “Why did this just happen?” I know things like that may happen and at that point I could still see some guys up front. I was like, ” [Pauls] Jonass, he is realistic. We might be able to still get him.”

I put my head down and just kept charging. I thought that with a sixth I might be able to get on the podium if I was lucky, but to get the overall… I think this is the second time in my career. In 2017, in Switzerland, I also got a sixth and a first for first overall. You need a bit of luck. I got that but I have had a lot of bad luck in the past as well [laughs]. No, it was good. I showed in the second half of the first moto… The speed that I was producing was good and I was the fastest guy on track at the end, I think. The second moto, yeah, it was more about surviving with the goggles and the mud. It was a good day.

Everyone says, “Jeffrey was a bit off at the first two rounds. What will it take to get him back to his old level?” Sometimes it is as simple as you having an issue in the first moto, so you were pissed off and put your head down. Then suddenly it is like, “Wow! The speed is back!”

Yeah, like I saw on the finish line that I was only like 12 seconds behind. I think after the accident happened I was like 20 to 30 seconds. I really charged back, but hey. You are racing the best guys in the business so, you know, those guys are also working on it and trying to win. I’m not the only one. You know, Tim [Gajser] has been showing that he has great speed throughout the first three rounds and Tony [Cairoli] is there. There are so many guys who can come in between… Jorge [Prado] and [Romain] Febvre is doing a great job. For sure, I was a bit off at the first two rounds. Today was a good day though. Going into Oss, it is a track that is not my favourite. It is a sand track though, so it is already way better. Then my tracks will really be coming – Latvia and Lommel are tracks that I really enjoy racing. We will work from there.

I think that people will overlook how big this win is for you. The last one was at the beginning of September last year, like that is a long time.

I have not raced mate! I haven’t raced!

Yeah, but you have been through a lot! Come on!

Yeah, sure! I had not raced since September until like three weeks back, so I did not have many opportunities. The third opportunity I got I won…

You actually only did not win for two weeks. Look at you go [laughs]!

It is right though. The worst thing was that I was really off at the first two rounds, speed wise. This weekend was the first time that I felt like I could match the speed of the top guys. I feel like I can still get a bit better and, yeah, that is what we will try to do.

Yes and no, because in that first moto I think I could have still gone for a podium spot to be realistic. The guys were just in front of me and if I could have produced that speed until the last lap then I am sure I could get somewhere in the top three. I definitely lost some valuable points but I think that after what happened with the stone in the rear brake then I should be really happy that it was not a mechanical issue. I should be happy with a sixth and a first to win the overall.