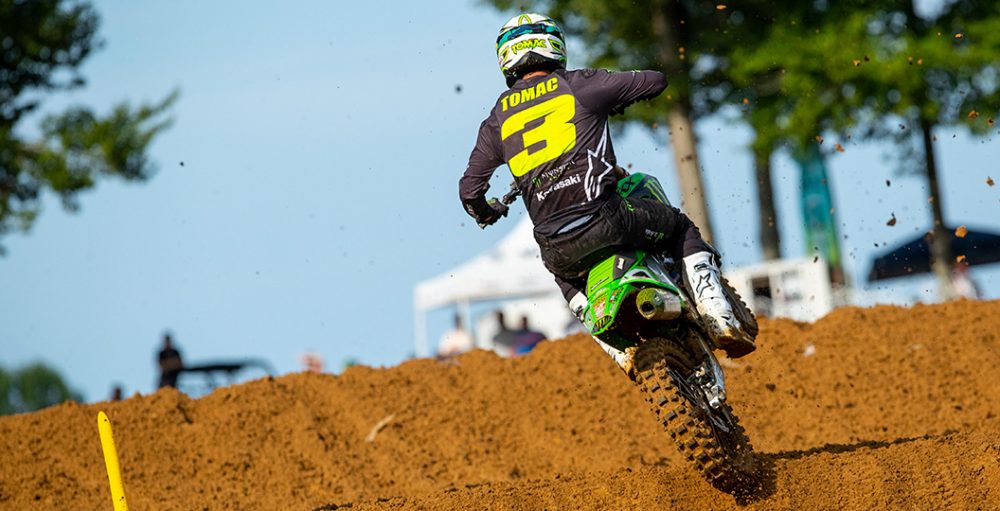 Eli Tomac only won three main events in 2021 Monster Energy Supercross, which was fairly surprising. Even more shocking is the fact that he hasn’t taken a single overall win in 2021 Lucas Oil Pro Motocross. There is still some time for him to leap atop the podium, of course, as three rounds remain, but shooting for a single win is not what most imagined when predicting what he would do this season. Tomac ended in third overall at round nine, Budds Creek, via 4-3 moto scores.

Tomac, a man of few words at the best of times, briefly recapped his day and fight for that elusive victory in the post-race press conference, hosted by the folks at MX Sports Pro Racing. There was not a lot of insight from the former champion, but he did make it quite clear that he’s motivated to place his Monster Energy Kawasaki on top of the box one more time. Tomac will, of course, move on from ‘green’ at the end of the term, which is also talked about below.

MX Vice: Another podium and you were right there in that second moto. Talk about your day. It feels like you are getting closer to that win that it feels like everyone is waiting for…

Eli Tomac: Today I had a little bit of everything. I had a couple of good starts. Moto one was disappointing because I was there on the start and ended up getting passed. I got a little bit tight and was just riding around in fourth for the whole time. That was disappointing. I knew I would feel better for moto two and I did. I rode better. Dylan [Ferrandis] and Kenny [Roczen] were in front of me. We were all going pretty close to the same speed – we all bunched up and were there at one point. Nothing really happened with my situation. I was happy with the riding in moto two. It was okay. I’m still looking for that win.

Podium on the day, but you are still searching for that win. Are you having fun? Is it frustrating on a day like today, when you have the speed, that you cannot get it done? Is that frustrating for you?

It was good to be at the front of the race – that is for sure. I was frustrated with moto one, but happy with the riding in moto two. I’m scratching my head on how I have not gotten an overall yet. I have had good second motos before, but just underperformed in moto one. We are close, right? I am still getting beat though. That is it.

You are considered a veteran at this point in your career. Can you talk a little bit about what impresses you about Dylan Ferrandis or gives you a challenge? What is it about his riding style?

Well, he has been fast and really consistent. He has not messed up at all yet – he is kind of just well rounded. He is doing everything just right and solid everywhere. That is what I see when I am behind him, plus he has good endurance. A lot of guys are hit and miss between the motos, even I have been this year. He is solid for motos one and two though. Jus solid.

Wrapping up your time with Monster Energy Kawasaki, what would it mean to you to get another win for those guys?

Like I said, I have been so close and I want to do it. There is no lack of motivation there. I am searching for it. We have got three to go and I think it is very well possible. My starts were better. It’s going to be close. I mean, we are close. I just need to get that first moto dialled in and start at the front in moto two.

Your time is coming to an end at Monster Energy Kawasaki, when can we expect an announcement with your plans for 2022?

That is October 01. That is the normal contract time for us. October 01.

You have won the last two years at Ironman. Is that something that gives you confidence, heading back to these tracks? You have obviously had a lot of success everywhere.