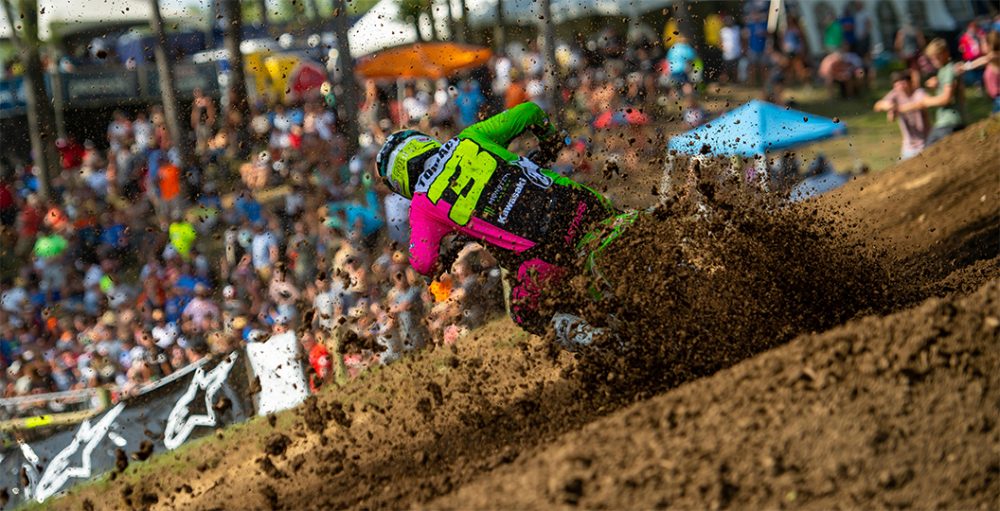 Monster Energy Kawasaki’s Eli Tomac finally leapt atop the 450MX podium at the tenth round of 2021 Lucas Oil Pro Motocross, Ironman in Indiana, as he claimed his first overall win since Thunder Valley in October 2020. The win did not come as much of a surprise – he has been on pace more often than not this year – but many were questioning whether he would indeed go winless in his final year in the ‘green’ camp. Tomac is third in the points, 21 points down on Ken Roczen in second.

Tomac, a three-time 450MX champion, is obviously expected to win titles. A single win is simply a must and, in reality, should have come much sooner than this. The fact that it had eluded him up before now had clearly worn on him, as he was buoyant immediately after this triumph and the same could be said about his appearance in the post-race press conference. The transcribed version of what he said in that media event can be found below, for those who prefer to read.

MX Vice: Is this a thrill to win or more of a sigh of relief? You have been so close [to this overall victory] all year.

Eli Tomac: It is both. I have had really good second motos at some of these races and I have been really strong – I have had some of the fastest laps. I was always off in moto one and then I just was not getting starts. The field is too strong – Dylan [Ferrandis] and Ken [Roczen] are riding too good – and it has been tough that way. I finally put all of those things together today and made it happen. I felt really good on this track the whole day. We kind of got along. It was kind of a combination of that with good starts and I was physically strong too. I feel like it is one of the only hot races that we have had. Last week was a little warm, but nothing like today. It is nice to get one.

You were asked about how much of a relief this one win was, but I want to look at the all-time win list. You are just one behind Bob Hannah. You have two races left with Kawasaki, so what it would mean to get one more and tie with him?

That would be sweet! It would just be sweet to check off another win. I was just so thankful to get the win today, at this point, so I had no idea about the overall win list thing. Yeah, that would be cool.

You knew where you stood after that first moto – you got to run up front the whole time. Were you confident that you could get the win going into that second moto? Did you make any changes between the races?

No changes between the races. The same bike and same set-up. It is really all about giving myself a shot for that second moto – that is what I feel like it has been like at most of these races. It was all about moto one and being in the hunt today, just trying to get to that second place. There are a lot of fast guys and consistent guys. It has just been a gnarly year that way. It has been that way. We have been so consistent and that is it. I was just focused on moto one.

You have become a veteran and are getting a little bit older. Has your training changed at all? Have you noticed a difference with how that affects you on a weekend like this? It was very hot and humid. Has there been a transition that you have made?

I feel like outdoors has gotten easier with age. When you get older and in the middle or late twenties, then I feel like it gets easier. Even in the heat! I used to struggle with the heat in the 250MX class. If I saw 90 [degrees Fahrenheit] and knew it was going to be a humid race then I would kind of get spun out about it. Nowadays, I am kind of looking for that. I feel like you actually get better in motocross, endurance-wise, as you get older.