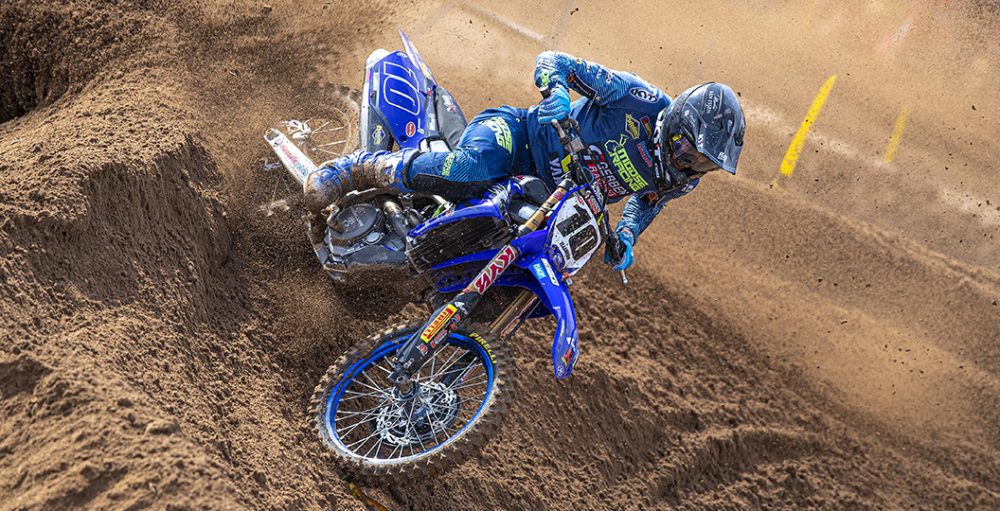 There are many different stories that have emerged across the first seven races of the 2021 FIM Motocross World Championship. With so much going on, certain stories have flown beneath the radar or not received the attention that they warrant. Calvin Vlaanderen falls into that category – he has risen to prominence in the premier division and proven that he can challenge for a spot in the top five with a satellite team.

Vlaanderen is doing the most with the least, as the old saying goes. Eleventh is the position that he occupies in the championship standings, despite a slow start after recovering from a torn ACL, but he has made some significant steps forward as of late and become a top-ten regular. No points were scored in the second stint in the Czech Republic or moto one in Latvia, as crashes left his bike mangled, so those holes in his scorecard have hurt his overall ranking. It is clear that he is capable of so much more when watching trackside though.

There are five full-factory guys behind him in the championship standings, so naturally some question when Vlaanderen will get bumped into one of the elite teams. The contract that he has with Gebben Van Venrooy Yamaha, a team that is currently enjoying more success than ever before, will expire at the end of the term and he will be open to field offers. In fact, a couple of discussions have already begun. “I have been approached by two teams already,” Vlaanderen said. “You can always talk and see what they are offering. My number one [priority] is to be on a factory team. That is all I am going to say.”

Where are the options? There are two seats over at KRT (rumoured to be run by the IceOne squad). Romain Febvre has a tempting offer to go there, but nothing has been signed at the time of writing. Husqvarna may field a second 450F guy – Thomas Kjer Olsen appears to be the only one locked in there. It remains unclear what Standing Construct will be doing as well and there may be another position over at De Carli, depending on how certain dominoes fall. Beta has an open berth too, if you want to put them in the same bracket as the other factory efforts. There are options at the elite level.

Monster Energy Yamaha Factory MXGP, Red Bull KTM Factory Racing and Team HRC are the teams with no room at all. A position actually became available at HRC, the outfit where Vlaanderen really made his mark, just a handful of months ago. There was a discussion about him filling in for the injured Mitch Evans. “There was no like offer on the table,” he explained. “Giacomo [Gariboldi] came to me in Russia and said, ‘How are you with your contracts? Are you tied down?’ He could obviously assume that I am… I am loyal to Yamaha and to the team, so I am not going to go to HRC.

“Of course, I would love to be able to ride that bike in one way. I know the people there – they are good people. It would be great to be there, but on the other hand I am loyal to this team and Yamaha. I would never do that to them and burn a bridge like that. These guys work hard. I would never do something like that and just leave them. That is something that I would never do in my career. I signed an agreement to stay here for the whole season and that is what I’m going to do. I will give my best in every race – getting a good result is also for them.”

It is understandable that the lure of jumping onto the CRF450RW may have been tempting, but such a move is never quite as simple as it seems on paper. Expectations suddenly heighten, yet said rider is attempting to adapt to a new machine in the middle of the season at the same time. It can really be counterproductive and it would have been in this instance – Vlaanderen has put a lot of effort into refining that YZ450F. It is easy to forget the difficulties that the Gebben Van Venrooy trio went through before the first COVID-19 lockdown in March last year.

Doing the best with what he has is a priority at the moment and it feels as though a top-five finish is in the not-so-distant future. Vlaanderen is still fixated on securing a factory seat for the new season though and one would think that such an opportunity would arise. Then again, it would have been tempting to make a similar bet at the end of last year.