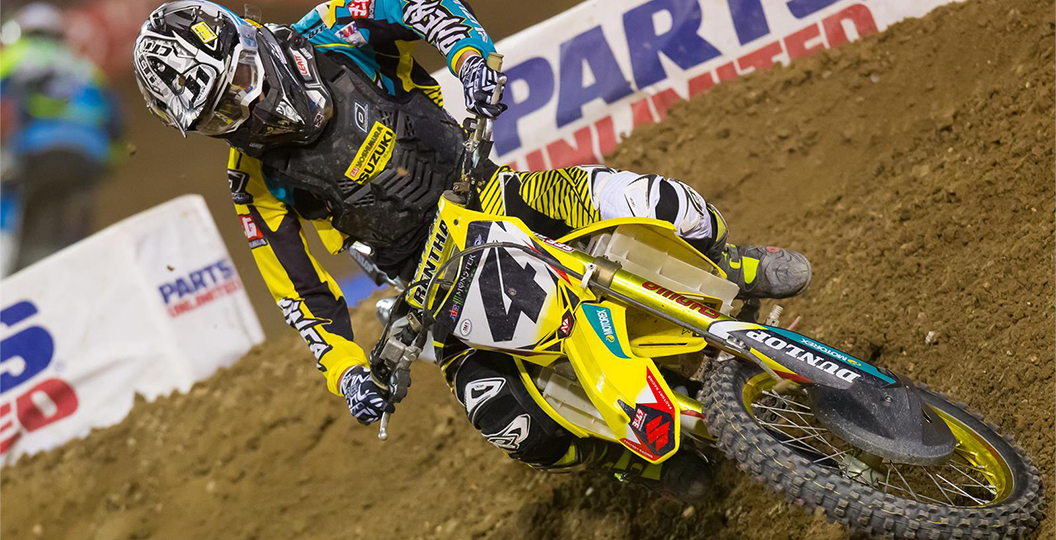 Baggett injured; Out of A1.

Chino, CA (Dec. 16, 2015) – Yoshimura Suzuki Factory Racing’s Blake Baggett was injured in a practice crash on Tuesday during testing in Corona, California. Baggett was rushing through a whoop section at speed when he crashed and hit the ground hard. He suffered a number of injuries and as a result will miss the start of the 2016 Monster Energy/AMA Supercross season.

Among the injuries Baggett suffered in the crash include a broken collarbone, broken ribs and broken scapula. He and his family are still discussing options with his doctors on how to move forward. The goal is to return to the track as soon as possible, but also to do it safely making sure he is fully recovered before coming back to racing.

“We’re hoping for a quick and full recovery,” said Yoshimura Suzuki Factory Racing’s team manager Mike Webb. “It’s a real shame because he was so far ahead of where he was at this point last year, but dealing with injuries is a part of the sport. Blake had worked really hard training for this season, had put on muscle and hours of hard work on the track and it was showing. On the positive side Blake’s was getting so strong physically that we believe that it will help him come back quickly from this injury.”

Now the team’s focus turns to a solid return to Supercross by Baggett’s teammate James Stewart. Stewart suffered some injuries of his own during an off-season races in Las Vegas and France, but his comeback is going well and it looks as if he’ll be 100 percent ready to go for the season opener of the 2016 Monster Energy AMA Supercross, an FIM World Championship at Anaheim’s Angel Stadium on January 9.

About Yoshimura R&D of America: Yoshimura is “The Leader in Performance” and has been for more than 55 years. With unmatched skills, knowledge, and passion for racing, Yoshimura is on the forefront of the aftermarket exhaust industry. Yoshimura pipes are race bred and feature the same legendary performance, fit and quality that has been their trademark for more than five decades. To learn more about Yoshimura and view their wide variety of performance products, visit www.yoshimura-rd.com.