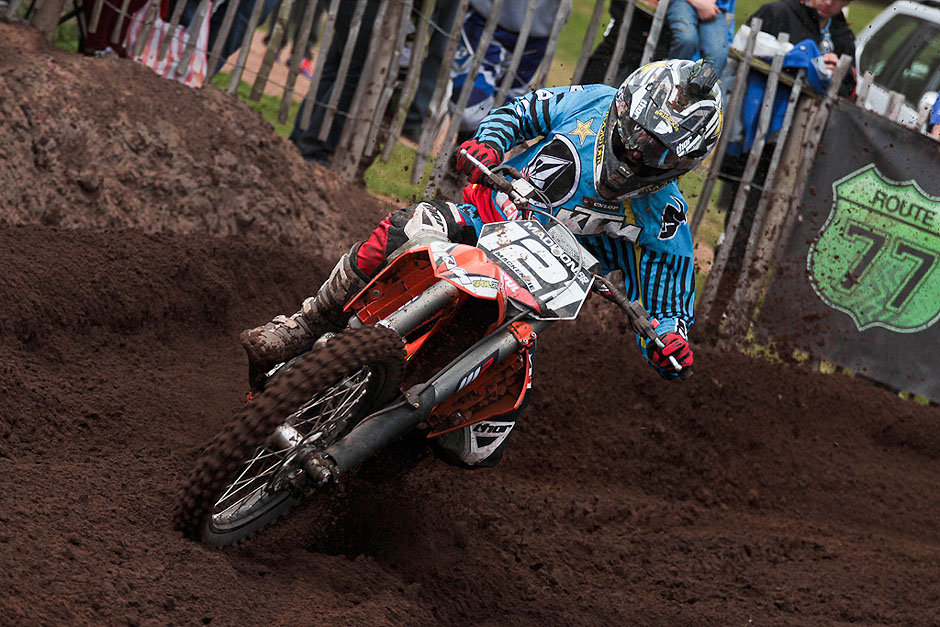 Bad luck for Pendrich KTM as they continue find their feet

Barely a fortnight of coming into being, Pendrich KTM made its Maxxis British Championship debut at Hawkstone Park this past weekend. Comprised of Bryan Mackenzie and Mark Perfect, the team hoped to build on the riders’ past successes in the championship and continue up the ladder.

Morning qualifying on Sunday saw Mackenzie put in a qualifying time that placed him in eighth place, allowing him to improve on his timing in the super-pole by two positions, going to the start line in sixth. His younger colleague qualified in thirty-ninth, the changes made to Hawkstone Park a somewhat unwelcome surprise.

For MacKenzie, the day would start off with a cracker of a first race that placed him just outside the top five in the first lap, and in the middle of a hard battle for positions soon after. Much to his chagrin, he lost his grip on the ever-changing track surface and lost several positions that were impossible to make up with the remaining time. Ending sixth was the end result. In the second race, Mackenzie found himself making yet another speedy trip up the field, but some race contact with another rival brought him down, costing him valuable time and positions with a pit-stop. After restarting outside the top twenty, he soon made inroads into the points again, but another crash dropped him back into the back of the pack, leaving him no time to return to the top twenty and seeing him across the finish line in twenty-fifth.

The first two races scored together gave Mackenzie an overall score that allowed him to join the super-final at the end of the day. Here he hoped to make up valuable points lost in the previous race, but it was not to be. A crash on the start line meant a restart outside the points yet again, and with the race including stronger MX1 bikes, it was a hard uphill struggle to regain positions. Barely inside the points, fate chose to strike another blow with a stall that again cost Mackenzie sufficient positions to drop out of the points and end the day in fifteenth overall.

Perfect on the other hand found himself in the back of the pack, holding his position with a solid performance. With minutes left on the clock, disaster also struck here, forcing him to return to the paddock and out of the race. In the second race, he found himself in the thick of things after a great start. With strong rivals working their way forward, Perfect found himself progressively dropping back before settling into the rhythm that lasted to the end, giving him a thirty-third place on the finish line.

Commented team principal, Mark Perfect: “Today started off ok, obviously we’re just trying to find our feet, it’s a learning process and elimination of faults. We had some minor problems with the bikes today, so we just have to eliminate those and push forward. Bryan had a good qualifying, The boys have bonded well, everything’s good with the training side of things and now we just need to get some decent results. In the last race Bryan had some mechanical problems, again just some teething problems we will resolve.”

Bryan Mackenzie (#121): I think my riding was a little bit better than expected with my injury and my not riding all week. The first race was good, I had a little slip-off unfortunately which cost me a potential third or definitely a fourth, I ended sixth and I was happy with that. In the second race I was up there again, then had a run-in with someone and I ended up dropping back and having to pull in to straighten up my bars, and I ended up outside the points unfortunately which I was really  unhappy about. In the last race, I got caught out again just going up the start straight. I managed to pick myself up and got going again, got up to seventeenth and got a bit of a problem with the bike. We had a problem getting ready with the bike beforehand, which manifested itself in the race and caused us some grief, and that was it really, another no-score and very disappointing. Mark Perfect (#125): In qualifying I did what I thought was a good lap but didn’t seem to be in the mix with people. Everyone was going a bit faster than me so I ended up thirty-ninth which was definitely not what we were expecting. Hopefully we can pick stuff up for qualifying. Race one I got a good start off a bad gate pick and I hung with the pack for about 15 minutes and then I had a bike problem which ended race one for us in the pits. Race two I had another nice start, was in the top twenty in the first lap, and slowly fell back, I tried to race as hard as I could and hang with the guys. In the last few laps as the lap riders came through, I lost tow with them, but hopefully we can pick up from here and improve in the next few rounds.