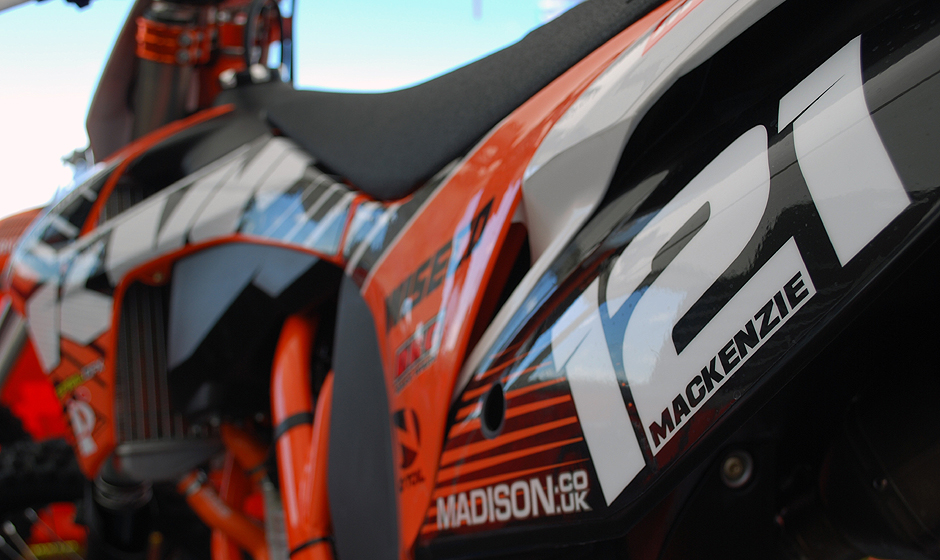 After a very busy week, the Midlothian-based newcomer to the Red Bull Pro Nationals, Pendrich KTM, hoped to make the right impression at the local Scots round of the championship at Duns this past weekend. But it was not quite to be. For team star Bryan Mackenzie, the morning’s free practice session ended prematurely with a crash that cut close to the bone, literally. A deep gash on his forearm required medical treatment, but the Scot was back on the starting line when time came to race. Team mate Mark Perfect qualified in eighteenth.

Mackenzie’s luck went from bad to worse in the first race after a start in eleventh. Whilst moving up the pack, a sharp gust of wind after cross-rutting threw Mackenzie over the bars, knocking him out and ending his day.

For Perfect, the day was once again an improvement. Building on previous rounds, the youngster got off the start well, clocking in sixteenth after the first lap. Keeping pace with more experienced riders, he ended the race in fourteenth. The second race got off to an even better start; here Perfect found himself in the top ten in the first lap, but two crashes a few laps later dropped him back seven positions, from which he recovered two by the end of the race. With the first and second race results tallied, Perfect clocked in sixteenth overall on the day.

Team principal Mark Perfect Sr commented; “All in all we were delighted in the way the team came together in the last ten days, the setup is good. It is just a bit unfortunate with free practice where Bryan was injured. He went to hospital to get it seen to, came back and as Bryan is, he went back out there on the track. It wasn’t to be; he had a second crash in the first race and basically that was the day over for him. He’s slightly concussed, so it’s been a poor day for Bryan. Mark on the other hand was consistent, I see improvements, his times are getting better weekly, he’s starting to stay mid-pack and he’s starting to find his pace, it’s been slow but it’s gradual and he’s coming on, so I’m pleased with his performance. All in all, it’s a learning process, it’s our first big race, first time in the paddock, we’ll strive to take the team forward and keep winning.”

Bryan Mackenzie (#121): I’m really gutted with how the weekend went. The team, the bikes, the support, everything was great which is why it was so devastating that it panned out the way it did. I was minding my own business in free practice when someone got out of control on the other side of the track and crashed and got thrown underneath my wheels while I was in the air. I crashed pretty hard and my arm opened up pretty bad. I had to go to the hospital and get it stitched up. I was away for hours and unfortunately missed qualifying. I got back about 20 minutes before the first race and thought I’d give it a go anyways as I’ve rode many laps round there before but the track had obviously changed so much since lap 3 of practice and trying to learn the track while fighting through the pack at races speed was, in hindsight, stupid! I got caught out on a jump and hit the ground hard again picking up a concussion and calling it a day after that. I just didn’t want to let anyone down, I felt I owed it to everyone to at least try. Never mind though I guess, there’s always next week. Mark Perfect (#125): Today was a day that I feel I made some progress, improved on my riding and confidence; I felt a lot better than than I have recently. I qualified eighteenth in the MX2, needing around about 1 second to put me into the mix of things. In the first race I got a average start and kept pace with the boys that were around me. Just before the end of the race I lost tow with them and it made it hard to keep pushing on. I felt I was riding good enough but just have to work on race intensity for the whole race. In race two I got a real good start and raced where I’d like to be for the most part of the race. Again my intensity dropped with around 2mins to go and I was dropped from the pack.