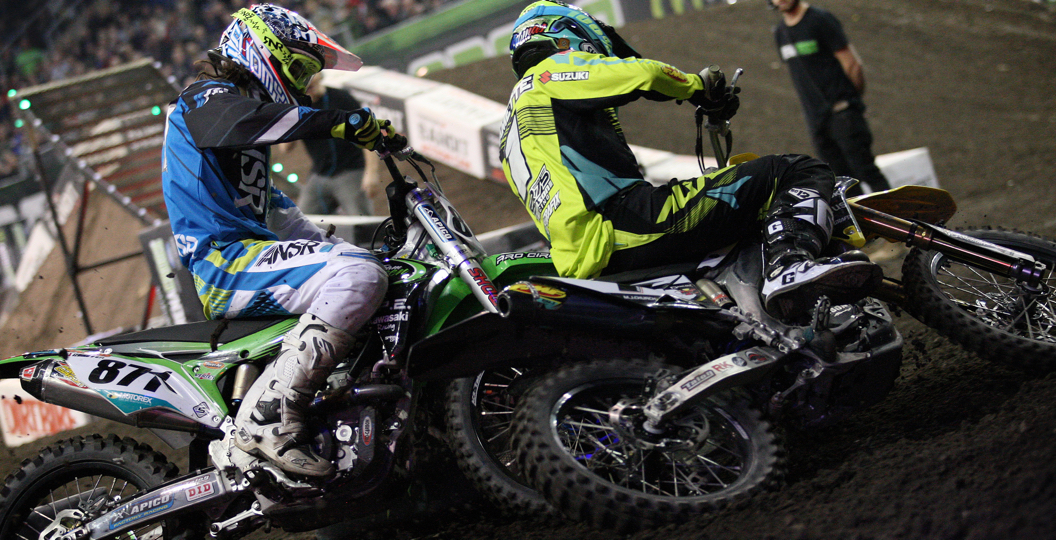 The enthused, capacity crowd at the SSE Arena in Belfast tonight were expecting to be entertained as the fifth round of the Monster Energy Arenacross Tour hit town for the second successive night, and the Tour didn’t fail them. Controversy ruled as top contenders clashed and bashed, and a new Pro championship leader, in the form of LPE Kawasaki rider Fabien Izoird, was crowned. The youth classes had their fair share of drama and the Freestyle motocross stars injected a sense of razzmatazz – Belfast demanded the best, and the AX Tour delivered.

From the very off, the big screen showing the previous rounds action, the pumping music and the atmospheric lighting all combined to build anticipation and, when the Pro riders roared into the arena side-by-side, the expansive crowd was hooked.

The racing stars of tomorrow again thrilled the crowd with their grit and determination as they jostled their way around the track, pushing their 65cc and 85cc machines over the exact same circuit as some of the best supercross racers from across Europe and America. In the 65cc class, championship leader Ollie Colmer crashed out in the closing stages of the race when he went over his handlebars on the whoops, leaving the way clear for Tye Jones to take the win. Arai Elcock was second and Ezra Blackwell third. In the Superminis, championship leader Harry Kimber extended his lead by winning the second race of the day ahead of Ben Clayton and Kacey Hird.

In the ProLites, Jordan Moxey got the holeshot, George Clarke got past and then Moxey went down. Championship leader Joe Clayton then made pass on Clarke for the lead. Clarke tried to fight back but didn’t have enough to reel in Clayton. Across the finish line it was Clayton, Clarke and Edward Briscoe.

The Frantic Pro heats threw up some surprises, not so much because of those who automatically went through to the Main Event, but more for the ones who had to go into the dreaded Last Chance Qualifier (LCQ). Josh Hansen and Fabien Izoird cleaned up in both their respective heats, whilst Angelo Pellegrini, Jack Brunell and Florent Richier where notables amongst the LCQs. Pelligrini won the LCQ in convincing style to secure his place in the final.

The Head-to-Head threw up one of the closest finishes ever in the history of the shootout, when fellow countrymen Thomas Ramette and Izoird literally flew across the finish line in unison after a two-lap dash of brilliant racing. Izoird went into the final but was outpaced by Hansen who also collected a valuable additional four points.

Freestyle motocross adds a dimension to Arenacross like no other and this evening’s performance didn’t disappoint. The FMX supermen wowed the Belfast audience with three sets of aerial uber-tricks that had the crowd yelling for more. Edgar Torronteras, Petr Pilat, Jamie Squibb, Dan Whitby, Samson Eaton and Aaaron Powley pulled out all the stops, taking their high-flying skills to the next level in order to reward their many fans. Of course, the Torronteras beat-boxing segment is always hugely popular too as is the unnervingly mesmerising routine conducted by Whitby, when he pitches his LED-clad Honda into the dark.

The Arenacross Tour has yet to hit the half-way point, yet the Main Event is already building into a battle of racing attrition. The Pro riders powered off the Arenacross start line, with Hansen and Chatfield vying for the same spot. They touched and dropped and left the door open for Ramette to take the lead ahead of Matt Bayliss, Izoird, Cyrille Coulon, Brunell and Cedric Soubeyras. A fast pace quickly ensued and Izoird made an inside move on Ramette, went through to the front and was never bettered, whilst the drama unfolded behind him. Recovering from a poor start, the red plate holder (Soubeyras) was making a charge, as was Hansen. As the two-lap board came out, ‘Soubeyras corner’ came into play again when the Frenchman clipped reigning champ Ramette’s back wheel, shoving him into the Belfast soil. Soubeyras went on to finish second, whilst Ramette valiantly coasted his way home in ninth. Hanson finished a credible fifth in the race and third overall on the day.

Amidst much finger pointing, Ramette remonstrated with Soubeyras after what was a truly unscripted, tension-filled and epic race.

Commenting on the race, Steve James team-boss of LPE Kawasaki and SJR Kawasaki said; “Fabien is a class act. He’s been on fire all day and to come out on top which such a highly-talented field is a testament to his racing skill. It was a shame for Josh as he too has ridden brilliantly today. Jack rode well in the last chance qualifier to secure his place in the final but Flo unfortunately suffered from ignition problems which stopped him from finishing.

All in all we, as a team, are very happy. There’s now a change in the leaderboard with Fabien leading by two points which means we are heading to Birmingham next weekend with the red plate. We’re not about to start relaxing though as it’s going to be hard to keep with such competition in this year’s series.

I would also just like to take this chance to thank all our sponsors, mechanics and riders as this is a true team effort – I just steer it. It’s been a pleasure to be back at Belfast, it’s one of my favourites.

Next stop on the Monster Energy Arenacross Tour is a double-header at the Genting Arena, Birmingham, Saturday the 23rd and Sunday the 24th of January 2016.

Birmingham will also be the setting for the first Pre-Show Pit Party. The party gets underway three hours before the show doors open. An additional charge of £5 is levied, but party-goers can expect to meet and greet all the teams, racers and FMX competitors; see the Monster Energy girls; get the beat with DJs and music; take part in a range of interactive games; check out the AX merchandise and the sponsor exhibition stands; have a go on Monster Energy crazy karts and take on board some refreshments. It’s pretty exclusive and a perfect way to get revv’d up for the show ahead.