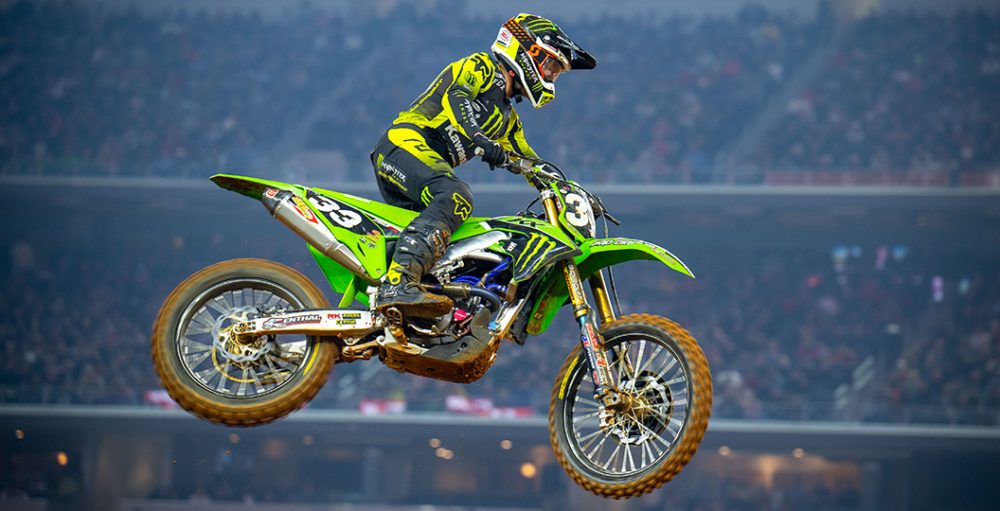 When it rains, it pours for Monster Energy Pro Circuit Kawasaki. Austin Forkner has confirmed that he broke his collarbone in the crash with Jett Lawrence at the eighth stop of 2022 Monster Energy Supercross, Arlington, and thus his title hopes have gone up in smoke. Forkner revealed the devastating news via the following social media statement, despite knowing that he sustained the injury immediately upon impact.

“Well, collarbone is broke… But after watching how hard I hit I’m lucky it wasn’t worse. Same one from last year just broke around the plate and through [sic] a couple screws. I knew it was broken as soon as I got up. I’ve just been dreading making the post about it, but I guess here it is. You know, I really was trying to make changes this year to my riding and my mentality to be ok with not being the fastest guy at every race, or settling for a third or a fifth at times so I would be at every race and make it to the end of the season. If that left me with a championship then great, but if not then so be it. But that’s why this sport is so damn tough because sometimes none of that matters and things just happen. Anyway, it is what it is. I do really appreciate all the support from everyone. It means a lot. I’ll be back.”

Seeing as Arlington was a Triple Crown race, and Forkner had finished first and fourth in the first two mains, he was still awarded seventh overall at round two of the 250SX East series, so only dropped to fourth in the points. It means very little though, as he will obviously be sidelined for a little while whilst he recovers. The good news for Monster Energy Pro Circuit Kawasaki is that Forkner’s teammate, Cameron McAdoo, won in Texas and’s tied for the series lead now.